Because I agree with the Bukele government that tourism offers real growth potential in El Salvador, we'll be following it more closely this year in El Salvador Perspectives.  Over the past two weeks, here are some tangible and intangible developments in tourism to the country. 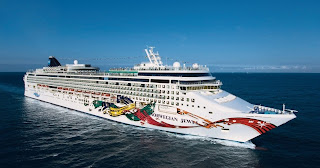 The Norwegian Jewel cruise ship pulled into the Port of Acajutla for 10 hours on Sunday, April 3 as part of a 10 day cruise from Panama City to San Diego.   The ship carried more than 800 passengers, and according to the Ministry of Tourism, 467 of them disembarked for tours of El Salvador.   This was the largest group of cruise ship passengers ever to disembark in El Salvador according to the government.

Cruise ships making stops in El Salvador are not a regular occurrence and the government is certainly hoping to convince more cruise lines to stop in the country.

Last weekend also saw Mango Expo 2022 in Ichanmichen Recreational Park in the municipality of Zacatecoluca in south central El Salvador.   The festival celebrated the harvest season of one of El Salvador's favorite fruits.  Need to add this one to the calendar for next year.

The ministers of the economy and tourism recently announced a proposed $1.2 billion investment in hotel development. The projects would be backed by a US investment group:

The real estate developer, Charles Yi, reported that he will make a millionaire investment with the construction of three hotels, where it has been contemplated to install part of the film studios.

«These hotels can be summed up in three words that describe them better than anything. Number one is that it’s immersive, it’s something to experience, and it’s also entertainment» — he said.

Similarly, actor Daniel Baldwin explained that next summer they will shoot a reality show in El Salvador.

Daniel Baldwin is an actor who claims to want to create a film industry in El Salvador.   Charles Yi is a real estate developer and ordained minister listed on this website as having a multi-billion dollar portfolio of real estate development projects.   The hotel development will purportedly include film production studios as part of the "experience."

Also catching my eye was a press release announcing that you will soon be able to use your crypto to buy an NFT Residence on Playa El Tunco, complete with Salvadoran residency status!:

Fusso RE Token, Inc [Fusso NFT], the initial complete real estate development to be sold as non-fungible tokens [NFTs], has announced the launch of its project. A $60 million real estate project located in El Tunco, the tourist area of Bitcoin Beach, also known as Surf City, El Salvador, the highly exclusive real estate development unit contains two, three and five-bedroom beachfront units....Fusso NFT, in addition to the previously mentioned perks, will include access to an onsite beach club, gym, motor lobby, restaurants, pools, bars, commercial areas, and a private NFT art gallery as further benefits of owning these revolutionary NFTs.... Subject to future law amendments sent to Congress, buyers of Fusso NFTs will receive, instantaneously, permanent residence status in El Salvador.   Once an apartment unit is bought at Fusso, the buyer receives an equivalent in NFT form that gives full ownership of the physical property. He then can use, resell, rent, or fractionalize it or get a mortgage.

Fusso is partnering with Salvadoran real estate developer 3 Torres to build what it claims will be four 10 story towers in the surfing destination El Tunco (rebranded by the current Salvadoran government as "Surf City.)"

Count me as quite skeptical about either the film industry / hotel investment or the cyber NFT condominium at El Tunco.    Until there is an announcement that construction loan financing has been procured and land for the developments is under purchase contract, these are dreams being spun to get headlines and investor interest but not yet something to plan your future vacations to El Salvador around.

Rojo said…
It is going to be necessary a close look to the environment impact of the works.
10:56 PM

TSMontgomery said…
Forgive my cynicism but I have written too many expert witness declarations on country conditions for Salvadoran asylum seekers from Sonsonate (Acajutla in a couple cases) in the last five years to be doing cartwheels over this cruise ship visit to Acajutla. It's going to take only one case of cruise ship tourists being assaulted/robbed/kidnapped/shot by M-18 or MS-13 for this to end before it has begun--just as happened in Acapulco several years ago.

Two related, rhetorical questions: How much extortion are the tour buses/drivers paying the gangs to operate in and out of the port, and points beyond? Do cruise ship companies want to be in the business of subsidizing the gangs, however indirectly?

I have known El Salvador for 40+ years. It is a beautiful country with great potential for tourism. But, until the gangs are under control, cruise ship companies are beyond foolish to be bringing tourists in.
3:03 PM

Tim said…
In the 18 years I have been writing El Salvador Perspectives, I have not seen a single murder of a tourist. It is simply not the case that tourists are the subject of any significant amount of gang-directed crimes in the country. While the taxis, the restaurants, the bars and the tour bus operators may be subject to extortion and pay "la renta" -- the tourists themselves are not generally targeted in my experience writing about and living in El Salvador. They may be exposed to robberies and property theft -- but that is going to be true anywhere in the world that naive cash and electronics carrying tourists roam the streets.

Mexico has a thriving tourist industry in locations like Cancun and Cazumel with regular cruise ship visits -- but think about what you also know about gangs and drug cartels and their violence in Mexico.