From La Matanza to the Martyrs 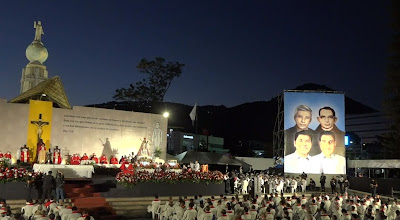 Ninety years ago yesterday on January 22, 1932, mass executions of indigenous campesinos in El Salvador began after a failed uprising.  The military government in El Salvador headed by General Maximillian Hernandez massacred twenty thousand or more in an event which is known in Salvadoran history simply as “La Matanza” – The Massacre.

Yesterday was also the day that the Roman Catholic church chose to celebrate the beatification of four of its martyrs, a formal step on the process of being declared saints of the Catholic church.  The four included Jesuit priest RutilioGrande, and two of his lay parishioners – 17 year old Nelson Lemus and the campesino Manuel Solorzano. These three were gunned down by the Salvadoran military as Grande drove towards El Paisnal to preside over a mass.   The fourth martyr beatified yesterday was Friar Cosme Spessotto, a parish priest from Italy, murdered in San Juan Nonualco, in similar fashion in 1980.

I don’t know if the church intentionally chose the 90th anniversary of La Matanza for the date of the beatification.  As far as I recall there was no mention of the massacre during the course of the beatification ceremony, but the date was entirely appropriate. The oligarchy of wealthy landowners, in evil alliance with the Salvadoran military, oppressed the campesino masses who worked their coffee plantations and massacred thousands in 1932 to show who was firmly in control of El Salvador when the campesinos dared to start an uprising demanding human rights.  That alliance would last for decades more and would also be responsible for the murders of Rutilio, Nelson, Manuel and Cosme.  Their work, prompted by their faith in a liberating God who had a preferential option for the poor and marginalized, challenged systems of oppression in El Salvador, and those systems continued to respond with murderous violence.

It is said that a sermon delivered by Rutilio Grande on February 13, 1977 in Apopa, north of San Salvador, sealed his fate.  The occasion for the sermon was the expulsion from the country of Colombian priest Mario Bernal, who used a radio program as a way of spreading a Gospel message which denounced social injustice in the country and offered hope to the poor.  After telling those gathered that if Jesus Christ returned to El Salvador, he would certainly be detained and declared a subversive, Grande continued:

This is not the Christ of the Gospel! This is not the young Christ, of thirty-three years, who gave his life for the noblest cause of humanity! My brothers and sisters, some want a god of the clouds. They don't want this Jesus of Nazareth, who is a scandal for the Jews and madness for the pagans. They want a god who will not challenge them, one who will leave those in the establishment peaceful, and one who will not say these tremendous words: “Cain, what have you done to your brother, Abel?"

Do not take anyone’s life. Do not put your foot on the neck of any person, dominating him or her, humiliating him or her. In Christianity one must be willing to give his or her life in service for a just order, in order to save others, for the values of the Gospel.

Ten days after Grande preached these words, Grande’s friend Oscar Romero was installed as the archbishop of San Salvador.  One month after preaching these words, on March 12, 1977, Grande was gunned down as he drove the road from Aguilares to El Paisnal with his companions Nelson and Manuel.

Oscar Romero would lead his church in El Salvador with the same prophetic voice heard from Grande.  In his famous sermon of March 23, 1980, Romero implores Salvadoran soldiers not to follow unjust orders to kill their brother and sister campesinos and orders the Salvadoran government in the name of God to “Stop the repression.”  Romero reminds those listening to his sermon of Grande’s murder, which had just seen its 3rd anniversary.  As in Grande’s Apopa sermon, Romero refers back to the social justice teaching of the Church in the Second Vatican Council and at Puebla and Medellin.  As in the Apopa sermon, Romero centered on the Old Testament command “Thou shalt not kill.”  Just like Grande’s sermon, Romero’s sermon of March 23 sealed his fate in the eyes of the oligarchy/military alliance.

In addition to Romero and the four martyrs beatified on Saturday, countless others would lose their lives in El Salvador’s conflict years, martyrs inspired by their understanding of a Gospel message which called for liberation and a preferential option for the poor.

Here are more items related to the beatification of the four Salvadoran martyrs.

For more on La Matanza: