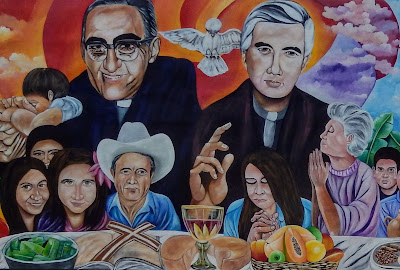 On Saturday, January 22, martyred Jesuit priest Rutilio Grande will be beatified in a ceremony in San Salvador.  Grande was a Jesuit priest working with poor campesinos in the countryside near El Paisnal, El Salvador. On March 12, 1977, while driving on the road between El Paisnal and Aguilares, assassins from Salvadoran security forces killed Father Grande, as well as two of his campesino parishioners, Manuel Solorzano, 72, and Nelson Rutilio Lemus, 16. Rutilio Grande was a friend of Archbishop Oscar Romero, and this killing is said to have been one of the key events leading Romero to align his ministry with the cause of the poor and oppressed in El Salvador.
On Saturday, Rutilio Grande will follow Oscar Romero towards recognition as a Roman Catholic saint in the beatification ceremony in San Salvador.   Along with Grande, Solorzano and Lemus will be beatified, as well as Cosma Spessotto, an Italian priest murdered in El Salvador in 1980 while saying mass.  (More about Spessotto in a post tomorrow).
Rodolfo Cardenal, director of the Romero Center at the University of Central America who has written a biography of Grande, was asked about the martyred priest after his beatification was approved by Pope Francis:

What were the circumstances surrounding Rutilio Grande’s killing? What was it about his work with the base ecclesial communities of rural El Salvador that provoked a right-wing death squad to machine-gun Father Grande to death along with an old man and a boy from his rural parish?
It was a very difficult time. The popular sentiment of the masses was asking for rights and organization, for land reform and for a more equal society. The hierarchy of landowners decided to act in alliance with the military to not give up anything because of the fear that if they gave up a little, the poor would take it all. Rutilio’s parish at Aguilares was a very important center of this work for justice; they knew he was a leader and they decided to kill him.

What Father Grande learned and lived out was a simple truth: Until the marginalized communities he served created their own agency, until they acted upon their own reality as a church community, nothing would change. An outside leader could not come in and transform poor communities. Only local lay church leaders could encourage communities to become agents of their own change. The role of the Catholic Church, he believed, was to help those leaders emerge, support them, form them and walk with them. Inspired by the Gospel, these community leaders would become the most effective agents for the integrated development of their communities.
For two years Father Grande and his team led a delicate “mission” to very poor communities around his hometown. Through their own reading of Scripture, these communities came to realize that it was not God’s will that they remain poor. Building the kingdom of God meant they needed to advocate for their communities in ways that were peaceful—but forceful. Throughout Father Grande’s pastoral “experiment” in the rural villages of El Salvador, Archbishop Romero carefully watched his friend and confidant try to apply the social teaching of the church to the reality of poor, oppressed rural communities.
Slowly people began to change their mindset and realize their oppression was not the will of God but actually contrary to God’s love for them. But as their awareness and demands for change grew, so, too, did the danger they faced. Soon threats came in against both Father Grande and the communities he served, mainly from wealthy landowners who felt threatened by the priest’s work encouraging rural farmers to organize for a better life. Archbishop Romero witnessed the risks taken by Father Grande and saw the road he willingly chose in defense of the people he loved. On March 12, 1977, Father Grande was assassinated by government death squads at the behest of wealthy landowners.

The following words of Rutilio are as relevant today as they were in El Salvador of the 1970s:

It was this kind of "subversive" thinking which would turn Rutilio Grande into a martyr, the first of many priests in El Salvador who would be murdered in El Salvador's bloody civil conflict. On March 12, 1977, Salvadoran security forces ambushed and killed the beloved priest on his way to say mass in El Paisnal.

The online periodical ContraPunto published an interview in 2015 with Julio Sánchez, a member of El Salvador's National Guard, who admitted to his participation in the 1977 assassination of Father Grande Here is an English translation of a short portion of the interview:

Read the rest (in Spanish) here.

The beatification ceremony will take place at 5 p.m. El Salvador time, on Saturday, January 22 at the Salvador del Mundo Plaza and will be presided over by Salvadoran Cardinal Gregorio Rosa Chavez.  Attending will by 25 bishops, more than 600 priests and 5000 of the Roman Catholic faithful from parishes around the country.
There is a Facebook page at this link with all the details concerning the beatification ceremony.  The ceremony will be streamed live for audiences worldwide.
Additional resources regarding Rutilio Grande: