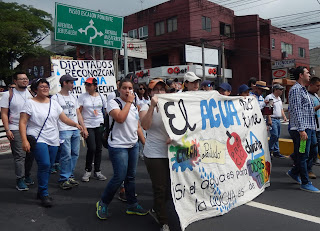 For fifteen years, environmental activists and water defenders have been calling for a comprehensive national water law in El Salvador which would protect the scarce liquid resource from over-exploitation and pollution.   Last night El Salvador's Legislative Assembly, dominated by the president's Nuevas Ideas party, passed a broad Hydro Resources Law, but water activists are denouncing that measure.

In June, president Nayib Bukele announced he was sending a water law proposal to the Legislative Assembly for review and adoption.   The Assembly created an ad hoc commission to study the law, which met with a broad variety of interest groups, although water advocates insist that their points of view were not taken into account.

Water advocates are claiming that the newly passed law favors mega-users of water and economic interests and does not have a focus on water as a human right.  Local boards which operate community water systems across the country are not given a role in managing water rights and instead may be subject to fees for the water they extract from aquifers to serve their communities.

Water rights will be administered by a government board with representatives from various government ministries as well as one from the national university and one from civil society (appointed by the President).  Activists see only limited opportunity for public participation in managing water.

Opponents complain that business can be granted a 15 year water concession to extract water which can be extended for an additional 15 years, which opponents contend is tantamount to privatizing a national resource which should belong to the public.

Activists are upset that the law leaves in place agreements between the national water authority ANDA and private real estate developers which give those developers the right to extract millions of gallons of waters to serve upscale real estate developments without consideration to the impact of that increased use.   Similarly, they point out, the law does nothing to constrain the use of water for sugar cane cultivation which has been depleting local water supplies.

In short, water advocates assert that the new Hydro Resources Law does nothing to address the historic water injustice in El Salvador where the wealthy and powerful business interests are able to have ready access to water, but the poor and rural communities will continue to struggle and have inadequate safe water supplies.

The president and his party are hailing this new law as delivering an important piece of legislation which 15 years of legislatures dominated by ARENA and the FMLN could never deliver.  They proclaim that the law guarantees that water will never be privatized (at least not more than 15 years at a time).     One can argue that this law is certainly better than the existing situation where no comprehensive law exists. For activists, however, this is far from the law which they have been seeking for more than a decade.

For the average Salvadoran user of water, the basic question will not be the wording of regulations or the form of governance over water.  Instead, their questions will be "does drinkable water come from my tap more frequently than today?"  and "will the water level at the bottom of the well that my family and community depend upon continue to drop?"