How to turn a misleading opinion poll into real news

How do you maintain your image as the most popular president doing the coolest things in the world? For Nayib Bukele, that means having a public relations media machine which knows all the tricks in the book. Today I present a case study of one instance earlier this year, where public opinion polling of dubious quality was broadcast far and wide as "real news."

On October 4, 2021, news pieces began circulating which announced that the Salvadoran diaspora in the US overwhelmingly supported the re-election of Nayib Bukele as president.  The poll was authored by the Center of Investigations Social and Economic Studies of Central America (CIESCA) and found that 99% of those polled favored a second term for Bukele and 96% agreed that Bitcoin would improve El Salvador's economy.  Soon the results had been shared broadly. The full document can be found here.

A poll which was dubious on its face.

The CIESCA poll results, presented in a meeting room at the San Salvador Sheraton Presidente on October 4, on their face seem highly questionable.   Even with Bukele's very high approval ratings within El Salvador, did 99% (!) of the diaspora approve of his reelection?   And given polls that showed that 60% or more of Salvadorans at home did not agree with the Bitcoin law, did migrating to the north suddenly turn 96% of Salvadorans into Bitcoin believers?

The little bit of information CIESCA provided about the polling sample also seemed odd and made it questionable that the polling was statistically valid. The polling results said Salvadorans were polled in seven US cities -- but two of the "cities" were states:  Maryland and Indiana.   And while Maryland might be forgiven because many Salvadorans live in that region -- the quantity of Salvadorans living in the flatlands of Indiana is tiny.  Among the cities listed, Seattle, with a small diaspora population was included, but Washington, D.C. , Dallas, and San Francisco with large Salvadoran populations were not.  So anyone with much knowledge of the Salvadoran diaspora in the US would see from the face of the poll that it had not managed to be geographically representative.   CIESCA did not provide data on the distribution of gender, ages, or education levels of the persons polled.

Readers in the US will be familiar with FiveThirtyEight, the media site with a major focus on analyzing public opinion polling.   In a useful article titled Fake Polls Are a Real Problem, Henry Enden described how readers should analyze a new poll when it is released:

Whenever a new poll comes out, the first question anyone should ask about it is: Who conducted this survey? Do the people behind it have experience conducting polls? At a minimum, can you find reliable information about their backgrounds?

In this case, the Center of Investigations Social and Economic Studies of Central America (CIESCA) has an impressive sounding name, but in reality little behind it. (Despite "Central America" in its name, there is no evidence it has conducted activities outside of El Salvador).

Presenting the results of the poll in the presentation at the Sheraton was Raisa Hernández Guerra, a Guatemalan, who is currently based in Michoacán, Mexico.  Her LinkedIn profile lists her current position as Resource Developer for Boys and Girls Clubs of America, with a degree in international relations, public administration and political leadership, and with nothing to suggest any background in polling or statistics.  She is sub-director of the Guatemala chapter of the World Network of Young Politicians (Red Mundial de Jóvenes Políticos or RMJP).

In response to e-mailed questions from me, Guerra responded that her work is in "learning and academia". She said she participated "ad honorem" with CIESCA and only had a role in the analysis of the results and delivering the presentation on October 4 at the Sheraton.

Nor will you find any background in polling or statistics in the profile of the president of CIESCA, Cesar Montesino.  Montesino, who also was present at the Sheraton presentation, currently holds himself out as a life coach and motivational speaker operating under the name Conferencias Vivenciales.  According to the profile he shares, Montesino began studying economics at the University of El Salvador but switched to theology, only later returning to get an economics degree in 2019.

A quick check of the Twitter account of CIESCA before the presentation of the poll results, would also have revealed the partisan bias of the organization.   In the weeks and months before releasing the poll, CIESCA has saluted the firing of judges, lauded Bukele's Bitcoin initiative, praised his public security plan and economic policies, and highlighted Bukele's handling of the pandemic.

I e-mailed both Guerra and Montesino asking them to identify who funded their poll and to describe how names and contact information for persons polled were obtained.   My questions went unanswered.

Two other organizations are listed as participating in this poll.  One, Intelligencia Digital ("ID"),  has no presence I could find outside of a Twitter account dedicating to creating infographics of statistics which put the Bukele regime in a good light.  According to Guerra, the only role of ID was the creation of the slides used in her presentation on October 4.   She had never met anyone from ID in person, all work was carried out over e-mail, and she was unable to give me any contact information for those persons.

The slides also contain the logo of the RMJP.  Guerra is the sub-director of the Guatemala chapter of this group.  Using the RMJP logo at a presentation in El Salvador's capital city, produced a reaction from the El Salvador chapter of RMJP, which declared that the El Salvador chapter had never authorized a use of the  logo.  Guerra responded that she was an officer of the Guatemala Chapter, and the use was authorized by that Chapter.

This information about the lack of expertise in conducting opinion polling, the backgrounds of the people involved, is all publicly available.

Anatomy of a PR campaign

CIESCA tweeted an invitation to the press at  5:49 am on October 4  to attend the presentation of poll results at 10 a.m. at the Sheraton Presidente in San Salvador that same day. In a conference room at the hotel, Guerra went through the series of slides containing the poll results.

Within moments, the Bukele public relations machine on social media went to work. A series of web sites, which day in and day out share the Bukele regime version of the news, began sharing the results of the poll on Twitter, Facebook and their own websites, posts which were liked or retweeted hundreds of times. Just a few of the examples:

Similarly, El Salvador's Ambassador to the US, Milena Mayorga, began tweeting about the supposed 99% support from the diaspora.

Later that day, Guerra gave a televised interview - to the government television news program, Noticiero El Salvador.   The online sites tied to the Bukele PR machine then promptly posted images and comments from that interview as well.

And on this occasion, the Bukele PR machine got an unexpected gift.   In Fake polls are a real problem, Enten points out that lazy journalists can find poll results an easy news piece to write:

As Adam Geller, a Republican pollster who worked on the Trump campaign, told me, public polls can create news because “they are easy stories to write.” But, he said, “there is far too little scrutiny on the methodology of the poll. To most journalists, a poll is a poll is a poll.”

On this occasion, news sites which are not so directly tied to the Bukele regime also published the CIESCA results.  One of them was Voice of America, the media organization of the US government, which uncritically republished the polling data.  Also picking up the story were Salvadoran news outlets ContraPunto and Radio YSKL.

Nayib Bukele quickly tweeted the Voice of America story out. 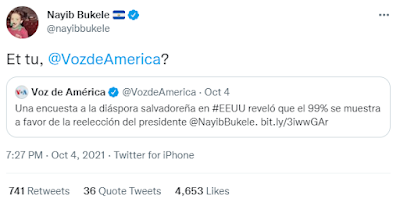 These suspect poll results from CIESCA still continue circulating where it benefits the Bukele regime. On November 1, for example, El Salvador's ambassador to the US, Milena Mayorga tweeted that polls are clear and overwhelming that the Salvadoran diaspora supports Bukele, citing the same CIESCA polling with a 98% approval rating.

The tools of an image machine

The communications and media arms of the Bukele regime pump out a daily flood of images and statements in the name of the government touting its accomplishments for the Salvadoran public.   And those messages can and should be evaluated on their own merits.
The dissemination of dubious poll results as in this case study are one example of the tools a public relations image machine uses to create the impression of endorsement from independent entities.  I have written previously of another example in which Bukele tweeted a paid "advertorial" as real news lauding his management of the pandemic. Another technique is to have El Salvador's paid lobbyist in the US write op eds in the Miami Herald and then portray them as real news in El Salvador.
Critical reading is ever less common in the social media landscape of today.   It's much easier just to like and retweet a headline such as "Recent polls say 99% support the president" without digging into the authors, their biases, and their methods.  That tendency makes the public relations tricks of the trade, like those used by the Bukele machine, even more likely to accomplish their objective of projecting an overwhelming wave of support for policies of the government.
Journalism Nayib Bukele Opinion Polls

Unknown said…
I really agree with Noam Chomsky: distracting with fake news nowadays has become a way to manipulate people to avoid them to pay attention to real problems!
1:58 AM