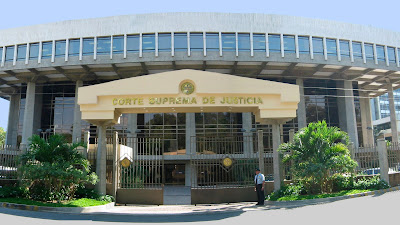 El Salvador is currently in the midst of an ongoing conflict which will determine if the judicial branch in the country has any remaining ability to check abuses of power by the executive or legislative branches.

On August 31, the Legislative Assembly adopted a measure from President Bukele to purge a significant part of the country's judges from their posts.  The changes require judges and prosecutors to retire once they turn 60 or have 30 years of service, which would remove more than 200 judges (one-third of all judges) and dozens of prosecutors.   Then the Supreme Judicial Court and the National Council of the Judiciary, filled with Nuevas Ideas appointees and allies, will be able to replace the judges with ones whom they approve.  The law also allows for re-assigning judges across the country.
That law could go into effect today, September 25.  A court in San Miguel, however, has issued an order staying the law for now.  The order requires the Supreme Judicial Court, the President, and the Legislative Assembly to refrain from taking actions to implement the new law and forcing older judges out of office. The order found that the forced retirement law violated the human rights of the judges under the Inter-American Convention on Protecting the Human Rights of Older Persons.
So as of this morning we have the highly unusual legal situation of a lower court issuing an order restraining the highest court in the country from implementing a law.

No surprise, the Supreme Judicial Court is appealing the decision.

One of the leading critics of the new law is Sidney Blanco, a former magistrate of the Constitutional Chamber of the Supreme Judicial Court.  Blanco said that any failure of the supreme court to adhere to the terms of the new injunction would be a “grave” constitutional violation and any new judges named to fill the open positions would be “false judges.” Blanco was interviewed in June after the purging of the sitting magistrates of the Constitutional Chamber and stated that he saw a “true risk of converting the Judicial Branch into the political arm of a political party.”

Earlier this  week, in an attempt to circumvent legal challenges, the Supreme Judicial Court made an offer to judges over 60 who agreed to resign voluntarily before September 25.   Those judges could receive 24 months of severance pay as compensation.  The Court also stated that judges could apply to continue on an availability basis, particularly if they were needed in actions involving grave violations of human rights.

The reference by the Supreme Judicial Court to cases involving grave violations of human rights responds to the impact of the law on the El Mozote massacre case.  Ever since the Assembly voted to purge judges, human rights advocates have been decrying the fact that the law would remove 61-year-old judge Jorge Guzmán, who has been courageously overseeing this war crimes trial for years.  But Judge Guzmán, has found himself in open conflict with Nayib Bukele as the Judge has ordered that military archives be opened for inspection and Bukele has refused.
Judge Guzmán has issued a letter stating that he would leave office on the effective date of the law and would only return if the law were declared unconstitutional, repealed, or enjoined.  He wrote:

There is no doubt that the victims, who are the center of the ‘El Mozote and neighboring communities’ proceedings, will see, as so many times before, their pilgrimage to justice extended, however, this has to do with a struggle as important as their case, the absolute and indispensable respect for the Constitution of this country.   If the Constitution is not respected, there is nothing more left to respect...

Nelson Rauda of El Faro, who has been covering the El Mozote trial for years, interviewed Judge Guzmán:

Do you think that the objective of the reform to the Law of the Judicial Career was to affect the investigation of El Mozote or is that just a collateral effect?

I believe that it has a much greater purpose to affect, not only this case, but to affect other possible cases of serious human rights violations that could be brought. Let us remember that the Truth Commission recommended the investigation of 32 cases, including those attributed to the Armed Forces and those also attributed to the FMLN. The idea, I believe, is to impact all these cases. Controlling the most emblematic cases through judges who are inclined to favor the perpetrators, such is the direction of the Casa Presidencial.(Video from the interview).

Judge Guzman is not the only judge overseeing an important human rights trial to be removed by the new law. The judge overseeing the case of the 1982 assassination of four Dutch journalists by the Salvadoran armed forces is also older than 60.
Bukele and his allies are pushing back with a narrative that the system is full with corrupt judges who needed to be purged. In this effort, they were aided by a ruling on Friday dismissing the case against former ARENA candidate for president Norman Quijano, who is alleged to have negotiated with gangs for support in the 2014 presidential election. The new ruling for Quijano held that Quijano has immunity for actions committed while he was in office and that the prosecution was improperly started.
After the decision, Bukele tweeted: 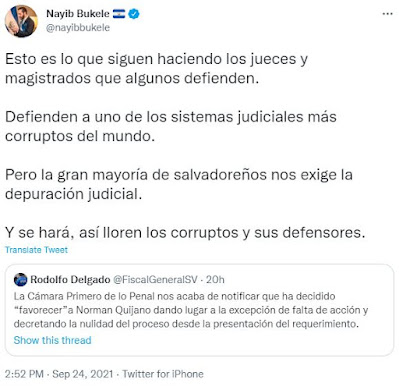 This is what the judges and magistrates that some defend continue to do. They defend one of the most corrupt judicial systems in the world. But the vast majority of Salvadorans demand judicial purification from us. And it will be done, let the corrupt and their defenders cry.

Salvadoran Attorney General Rodolfo Delgado tweeted “A resolution issued just on the day of retirement from the judicial career of this judge. Coincidence? I do not believe it.” Delgado was placed in office on May 1, when the new Nuevas Ideas controlled legislature deposed the five magistrates of the Constitutional Chamber and the Attorney General in office.

The following weeks will show just how completely Nayib Bukele and his Nuevas Ideas party have molded the judicial branch to their liking.   Under the mantra of "the people elected us to take these actions,"  the president and his party have also eliminated the ability of "the people" to check those actions.