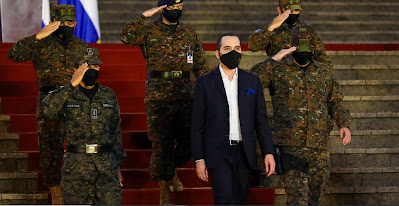 This week may go down in Salvadoran history as the week in which Nayib Bukele completed his consolidation of one man / one party rule in El Salvador. By eliminating one third of the country's judges and procuring a ruling from the Constitutional Chamber which allows him to run for an additional five years in office, the 40-year-old head-of-state has reduced the independence of any part of government which could act as a check on his actions.

The first event happened on August 31 as the Legislative Assembly suspended normal procedure and adopted a previously undisclosed plan to remove hundreds of judges and prosecutors.   From El Faro English:

On Tuesday, August 31, four days after President Bukele announced via Twitter that it’s time to “purge the judicial branch and remove the corrupt,” El Salvador’s Legislative Assembly approved previously unannounced changes to the Law of Judicial Careers and the Organic Law of the Attorney General’s Office, upending term-limits and placement of judges across the country.

The precipitous changes to the justice system will force judges and prosecutors to retire once they turn 60 or after completing 30 years of service, affecting one-third of all judges and dozens of prosecutors. The reforms also authorize the government-aligned Supreme Court and Attorney General’s Office to determine which judges must retire and when.

The Supreme Court will now hold the power to name the new magistrates, a move which legal observers have called unconstitutional. Lastly, the reforms create an arbitrary process for reassigning judges, which judicial watchdogs fear will be used to silence judges at odds with the Bukele administration.

The Nuevas Ideas legislative bloc approved the changes the same day the bills were introduced, without required debate in the plenary, and with the superfluous support of three minority parties, reaching an absolute majority of 64 of 84 votes.

The changes were immediately denounced by critics of the Bukele government.  A group of civil society organizations, focused on the rule of law and separation of powers, issued a strong statement:

The organizations signing below energetically reject the reforms to the law of judicial careers and the organic law of the attorney general of the Republic approved Tuesday August 31 by the Legislative Assembly in a rushed, opaque and illegitimate manner without deliberation. These reforms finish the abolition of independence of the judicial branch after the dismantling of the Constitutional Chamber last May 1..... 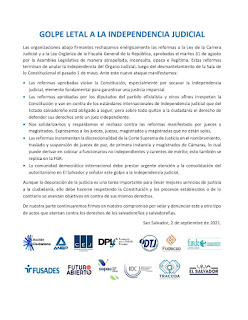 The Due Process of Law Foundation, one of the signatories to that statement, expanded on its concerns in a  press release:

"The reforms are aimed at removing members of the intermediate courts and the most experienced prosecutors, precisely those who could exercise internal resistance to the political co-optation of the highest authorities in both bodies," said Ursula Indacochea, director of the Judicial Independence Program of the Due Process of Law Foundation (DPLF).

The approved reforms expose El Salvador to possible democratic rupture by generating external pressures on the mechanisms of judicial control and protection of citizens' rights and liberties. Sonia Rubio-Padilla, coordinator of DPLF's office in El Salvador, said, "Both the legislative procedure and the content of the reforms violate the Constitution and international treaties signed by the Salvadoran State regarding judicial independence.”

The United Nations Special Rapporteur on the Independence of Judges, Diego García-Sayán, expressed his preoccupation with the action of the Legislative Assembly in several tweets: 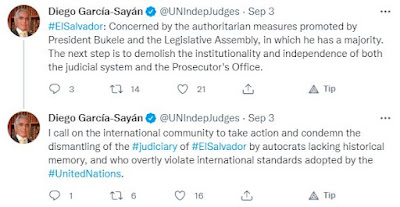 The editorial board of El Faro was blunt in expressing its opinion about the mass removal of judges:

Bukele controls the Legislative Assembly, where laws are created and approved; he controls the Attorney General’s Office, which has exclusive power to direct and exercise prosecutorial action, which is to say, to accuse; he controls the police, and thus the ability to carry out arrests; he controls the Supreme Court of Justice; and now, with the reforms to the Law of Judicial Careers, he will control the country’s judges.
For those who the regime or its functionaries consider enemies, there is no longer any escape. Anyone can now be subject to arbitrary prosecution without the right to due process — without the right to a fair defense or a fair trial. There is no more judicial independence; no more constitutional guarantees, no more judicial remedies. There is no longer rule of law. For the friends of the regime, on the other hand, there is no longer any fear that their crimes will be punished.

One serious impact of the change in the Judicial Careers law is the removal of Judge Jorge Guzman, the independent jurist who has been steadfastly moving along the El Mozote massacre trial towards possible resolution and justice.   He is over 60. 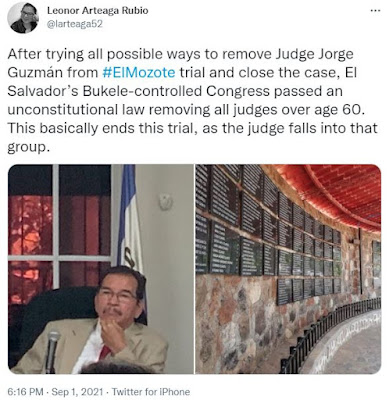 Judges affected by the changes denounced the new legislation.   They spoke of a possible judicial stop to holding hearings in protest if the law is not immediately repealed.
Legal experts in El Salvador pointed out what they saw as many other deficiencies with the actions taken by the Legislative Assembly.  Laws to affect the roles of judges are required to be introduced by the judicial branch, not the Legislative or Executive.  The law discriminates against judges of a certain age, and there was no claim or evidence that this age group is competent, or more or less corrupt than any other age group.   The law potentially violates employment protections and was passed using a procedure in the Assembly used for emergency situations.
Despite these potential defects, since it would be the judges of the Constitutional Chamber abruptly installed by Bukele on May 1 who would ultimately decide these issues, it is unlikely that challenges in a Salvadoran court system loaded with Bukele allies could succeed.

Issued late on Friday, the ruling was handed down by judges appointed by lawmakers from Bukele's ruling party in May after they had removed the previous justices, a step that drew strong criticism from Washington and other foreign powers.

Prior to last night, the understanding in El Salvador was that a president cannot be re-elected immediately after their 5 year term in office, but can only be re-elected after being out of office for a term.  And so we have seen since 1989 a series of five year, one term presidencies without the incumbent president seeking to be re-elected.  Then in 2014, Antonio Saca was permitted to run for a second term as president after being out of office from 2009-2014.  This understanding had also been affirmed by two rulings of the Constitutional Chamber.

That understanding of the impossibility of immediate reelection under the current constitution was also expressed by Nayib Bukele in a 2013 televised interview. 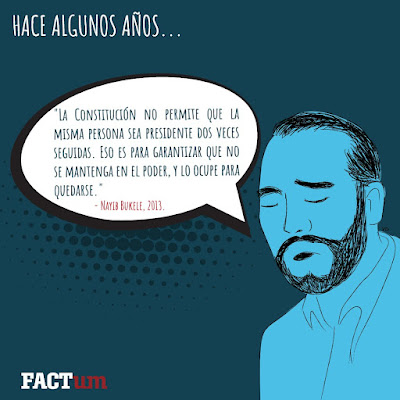 The Constitution does not permit the same person to be president two times in a row....  This is to guarantee that they don't maintain themselves in power with a focus on remaining there. (Nayib Bukele interview 2013 -- graphic from RevistaFactum tweet)

Current vice president Felix Ulloa has been at pains in recent months to say that he is not in favor of immediate reelection and that his new proposed draft of the Constitution does not include immediate re-election.
That changed with the post-May 1 magistrates of the Constitutional Chamber.   In a 28 page ruling, the judges installed by Nuevas Ideas express how they are not bound by any precedent they disagree with and that the interpretation of the Constitution must change with the times to reflect the will of the people.
The provision in the current constitution of 1983 relating to re-election of the president provides:

Art. 152.- The following may not be candidates for President of the Republic:

1º.- Anyone who has held the Presidency of the Republic for more than six months, consecutive or not, during the immediately preceding term, or within the last six months prior to the beginning of the presidential term ;

According to the Court, the reference to "immediately preceding term" refers to the presidential term prior to the current term.   Since the prior term was the presidency of Sanchez Ceren and not Bukele, by this logic, Bukele is not disqualified from running again by Article 152.  He would, however, be precluded from running for a third straight term.
José Miguel Vivanco of Human Rights Watch, and a regular Bukele critic tweeted:

El Salvador's Constitutional Chamber — which Bukele captured in May of this year — has just allowed Bukele to run for reelection.
The same script that Daniel Ortega [of Nicaragua] and Juan Orlando Hernandez [of Honduras] used.
Democracy in El Salvador is on the brink of the abyss.

Supporters of Bukele argue that the Chamber's ruling is actually pro-democratic, giving the people the right and the power to return to office a president who is doing a good job.  They rely on the idea of elections as the ultimate check on the country's leaders.  They point to the US as a prime example of a country where a president can be elected for successive terms.

Saturday night, Jean Manes, the acting US Ambassador to El Salvador tweeted the US condemnation of the Constitutional Chamber's ruling:

The United States government condemns the decision made on September 3 by the Salvadoran Constitutional Chamber.

This decision allows immediate presidential reelection and is clearly contrary to the Salvadoran constitution which states that immediate reelection is not allowed.

This ruling is the direct result of the May 1 decision of the Salvadoran Legislative Assembly to unconstitutionally remove the acting magistrates of the Constitutional Chamber and install replacements loyal to the Executive Branch.

This demonstrates a clear strategy to undermine judicial independence and remove a key counterweight to the executive branch.

A fundamental principle of democracy are the three branches of government, so a weakening of the independence of the judiciary is a sign of democracy in decline in El Salvador.

This decline in democracy damages the bilateral relationship that the United States strives to have with the government of El Salvador.

The past four months, since the Nuevas Ideas party of Nayib Bukele took over control of the Legislative Assembly, have seen that body (1) depose the five top judges in the country, (2) depose the attorney general, (3) install new judges and an attorney general hand-picked by the Bukele team moments later, and (4) fire one third of the lower court judges.  Those steps are closely followed yesterday by the newly installed magistrates of the Constitutional Chamber making possible five more years of rule by Bukele.  All of this consolidation of power for Bukele happens as the country approaches its Bicentennial of independence from Spain on September 15.