Today was an Independence Day in El Salvador quite unlike any in recent memory.  It is the Bicentennial of the independence of El Salvador and the rest of Central America from Spain, and is occurring in the midst of the third wave of the COVID-19 pandemic. Instead of  civic parades with school marching bands and military units, thousands of Salvadorans took to the streets in a series of marches protesting government policies.

In 2019, on the last Independence Day celebration before the COVID-19 pandemic, president Bukele hosted a large military parade, including a mock "anti-terrorist" operation against gang members.  The pandemic greatly limited any public gatherings in 2020.  This year, however, with parades and civic events still largely restricted to mitigate pandemic illness, civil society groups, healthcare worker unions, student groups, social movements all called for combined protest marches in the capital city of San Salvador.

The concerns of the marchers spanned a wide variety of issues.   They carried signs and banners decrying growing authoritarianism, the massive firing of judges, the unpopular Bitcoin law, a lack of environmental protection, disregard of human rights, violence against women, and more.  The combined marches were certainly the largest demonstration against the government during the time of the Bukele administration. 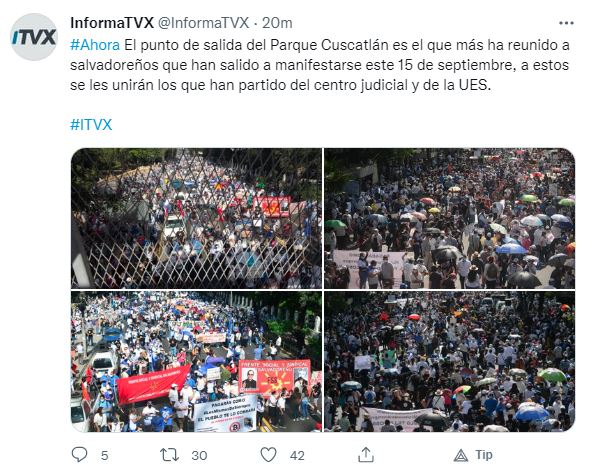 Estimates of the size of the protests by media usually referred to "thousands" of protesters.   The various marches ended at Plaza Morazan, in the historic center of San Salvador, the same place where Nayib Bukele had given his victory speech after winning the presidential election in 2019.
There were isolated incidents of vandalism.  Messages were spray painted on various walls along the protest routes.  At one point in the morning, masked individuals vandalized and set on fire one of the shelters where Chivo ATM machines are located.  There were conflicting reports about who these masked individuals were, with many claiming these were provocateurs infiltrated by the Bukele government to vandalize the kiosk while government media crews were in the area and ready to record the event.   There were other reports that someone in a government owned truck was distributing T-shirts with the ARENA and FMLN logos set together, to support a Bukele assertion that the two parties were working together to subvert his government.
The images of vandalism were the ones being featured by Bukele supporters on social media. 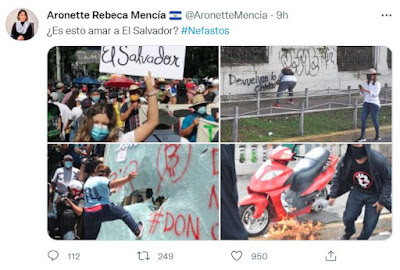 Tweet from Nuevas Ideas deputy
"Is this loving El Salvador?"
More collections of images from the protests can be found:
At 8 p.m. there was a national broadcast of Nayib Bukele's address to the nation, which had been recorded earlier in the evening on the steps of the presidential palace.   Assembled before the president were military troops, high public officials, and members of the diplomatic corps. 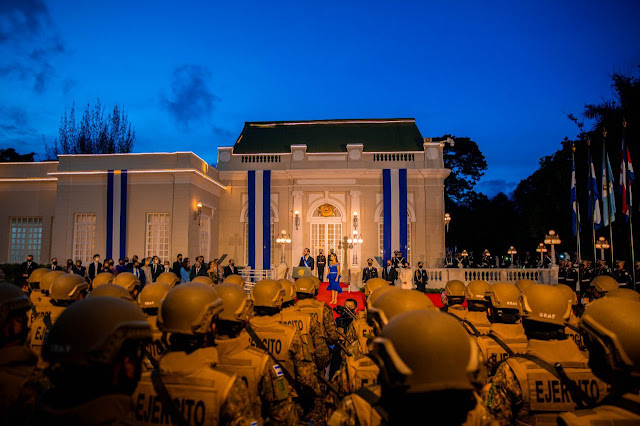 As has been in his practice throughout his political trajectory, Bukele began his address railing against his perceived enemies.   He announced that before he would give his prepared remarks he needed to respond to the street protests occurring earlier in the day.
Bukele claimed that the protests had been organized and funded by outside international interests, who had bused demonstrators in to protest.  He repeatedly stated that the demonstrators had vandalized and damaged private and public property.  In a statement clearly aimed at the US, Bukele stated that despite the purported vandalism, there was no repression or use of police forces.   In contrast, he said, there are other countries which regularly use tear gas against their own people demonstrating in the streets, and yet his security forces used not one can of gas.
Bukele said we are independent now and it is "real independence" and the country is not going to be subject to the orders of any foreign power.
Bukele then turned to what he said were his prepared remarks, in which he asserted that the present day was the most historic moment in the history of El Salvador.  We will accomplish what prior generations have only hoped for.   To be truly independent you must root out the old by the roots and there will be those who will cling to their old privileges and advantages, he said.
Bukele announced that soon a new water law and a law of pensions would be approved.  He claimed progress on a series of his earlier promises such as an airport in the east of the country, a new elevated highway at Los Chorros, computers with free internet for every child in El Salvador, a new public hospital, and a new sports stadium.
He repeated the government's position that its Territorial Control Plan was greatly reducing homicide levels and that the government was one of the world leaders in responding to the pandemic.
One thing missing from the president's speech was any mention of the unpopular Bitcoin law or the government sponsored Chivo wallet app, despite those subjects dominating the president's tweets during the past ten days.
You can watch Bukele's entire address here.
While the protest marches in the morning were the largest of Bukele's two years in power, it is far too early to call the street protests today the start of any kind of a movement which will threaten Bukele's hold on power.   While the various groups united on the usefulness of the Bicentennial as a powerful symbol for a day of protest, they are not organized and have no vehicle through which to achieve any political power.
Bukele decided to strengthen the impression that he really does not care about international opinion of his actions.   His definition of the independence being celebrated on this Bicentennial is the independence to take whatever action he wants, without regard to the opinion of the world community.
Constitution Nayib Bukele