Wednesday, March 24, was the 41st anniversary of the assassination of Oscar Romero by a death squad in El Salvador.   As was true a year ago, commemorations of the event had to be more limited to adhere to public health measures dictated by the pandemic.

Chapel at Divina Providencia Hospital changes its name.  The Vatican announced a change in the name of the chapel where Oscar Romero was murdered.    The chapel will now be known as " Saint Óscar Arnulfo Romero, Bishop and Martyr, Martyrial Chapel."   But it will still also be recognized as the chapel associated with the Divina Providencia cancer hospital where the martyred archbishop chose to live.

Archbishop speaks at mass at Romero's tomb. The current archbishop of San Salvador Monsignor José Luis Escobar Alas said that Romero's message today would be focused on continuing to denounce inequality, and a system which oppresses the poor and protects the corrupt.   A gallery of images from the faithful visiting the tomb is here. 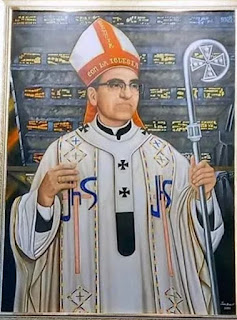 A new portrait of Saint Romero was hung inside El Rosario Church in central San Salvador.  The portrait by Costa Rican painter Ivonne Araya was commissioned by the Dominican order which operates the church and is based on a photo of a visit by Romero to the church while he was alive.

No progress on legal responsibility.  Human rights lawyers who have pushed Salvadoran prosecutors for decades to establish criminal legal responsibility for the assassination of Romero announced that the InterAmerican Human Rights Commission will summon the Salvadoran government yet again to explain why it has failed to comply with the commission's findings which require the Salvadoran state to seek justice for the martyred saint.   The judicial investigation has only moved forward in fits and starts in recent years.

For those who want to go deeper, here are a few pieces written in recent years by some great journalists: