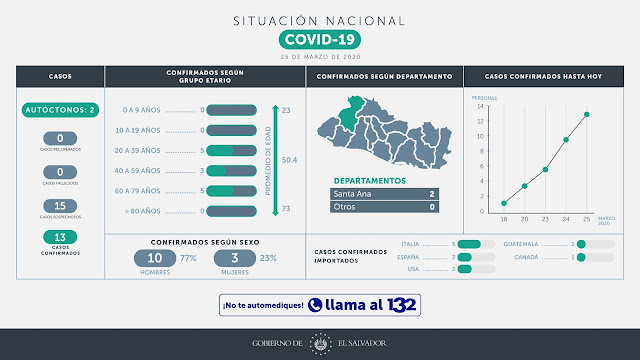 As of March 26, the number of confirmed cases of COVID-19 in El Salvador has grown to 13.  According to the government, 11 of these cases are people who contracted the disease while abroad, but two people were reportedly infected at home, apparently by contact with someone who had returned from abroad before all passengers were sent into quarantine centers.

This is day 5 of the national stay at home decree issued by the Bukele administration.   Everyone is confined to their homes except for one designated person per household who can go out to purchase food or medicine.   Also exempt are persons in essential businesses.

People outside their homes must have proof of their right to be on the street.   Forms have been circulating on social media to print and make your family shopper designation.

Private cars may only carry one person.   Taxis and Uber drivers may only have one passenger.

To enforce the stay at home order, the government is patrolling neighborhoods, setting up roadblocks, boarding buses and demanding to see proof of a person's right to be out on the street. 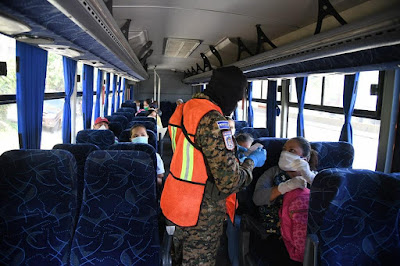 Persons found to be violating the stay-at-home decree are taken into custody and transferred to a "containment" or quarantine center where they must remain for 30 days.   As of today, 664 people had been detained for violating the stay at home order.  They join approximately 2400 persons in the centers are people who entered the country after March 11 and are required to be in quarantine.

Thus El Salvador has 13 confirmed COVID-19 cases and more than 3000 persons in this regimen of 30 days of quarantine for either entering the country from abroad or for violating the stay at home order.    And this creates serious human rights and constitutional law questions about whether you can justify on public health grounds the involuntary detention, without trial or hearing or process, of someone for thirty days who has not been shown to have any illness, or symptoms of illness. 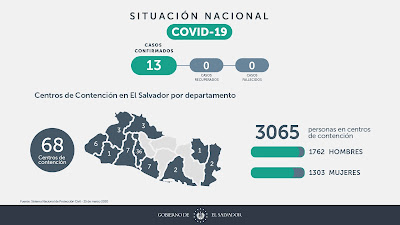 A group of human rights and civil society organizations issued a letter cautioning the government against an approach which ignored human rights, and which only gave vague instructions to police and military who are enforcing the quarantine in sometimes arbitrary ways.   They denounced the actions of the government which have simply ignored the pronouncements of the country's Human Rights Advocate (PDDH).

It must be reiterated, once again, that we are not against the national emergency measures decreed, as well as against other actions proposed by the Executive power. But these actions demand legal grounds and safeguards against abuses that can be committed.

Unfortunately, there are not a few who applaud that ladies who went to buy food for their family group have been arrested for not being locked down in their homes and were shown off handcuffed as criminals by the authorities in police delegations as a warning. These actions, published as an example so that the so-called home quarantine is not disobeyed, are called arbitrary detention. They have no other name.

The Legislative Assembly approved today a $2 billion package which Nayib Bukele has requested for dealing with the coronavirus threat.   This includes the funding for the $300 payments which will be made to families at the bottom of the economic scale in the country.

On Tuesday night, Bukele gave an hour long interview with rapper Residente about his government's coronavirus response.  (Much longer than he has given to any media outlet in El Salvador). In the interview he stated that the first $300 payments would start to be available on Friday, March 27.   It does not appear at the moment that this will happen or that the government has figured out all the logistics of the program.

The United States deported a group of Salvadorans to El Salvador on March 24 despite the country's ban on incoming passenger flights.  It appears this was same flight used to evacuate US citizens who wanted to return to US.  Deportees must enter into the 30 day quarantine in a containment center.

If I were in immigration detention in US, and my choice was 30 days quarantine in El Salvador, or be stuck in ICE detention indefinitely with risk of COVID-19 running rampant, I would probably prefer to be deported.  (Those US citizens arriving back in the US from El Salvador are not required to go into any specific quarantine, unlike passengers arriving in the US from Europe).

El Salvador is under quarantine, wondering if the virus will escape from the containment centers.  The country has one of the most intense efforts to "flatten the curve."   All are praying that those efforts will be successful, but questioning what limits should be placed on the the government by decree of Nayib Bukele.