El Salvador locks itself down 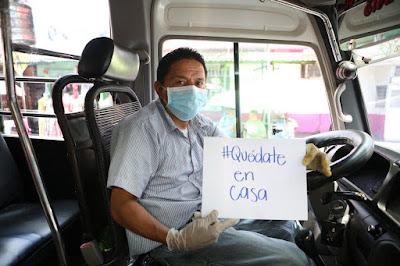 There are now three confirmed cases of the virus in El Salvador.   All those infected reportedly contracted the disease outside of the country – one person entered El Salvador through an irregular border crossing and was later identified at a hospital in Metapan, and the other two people were in quarantine after returning to El Salvador through the international airport from Spain.  So far the government says it has tested 102 persons for the virus.  There does not yet appear to be community transmission of the virus in El Salvador.  The government continues to prepare a 2000 bed temporary hospital in the CIFCO convention center.

Bukele addressed the nation again on Saturday night.  He declared a thirty day home quarantine for the entire country except for persons in specific classes such as public services, food production and delivery, essential utilities and delivery services, including one person in each family who can go out to buy food or to a pharmacy. Persons in the informal economy, such as street vendors, will receive a $300 payment so they can survive.  That video can be watched here.

All Salvadorans who have returned to the country since March 11 have been sent into quarantine in centers around the country. As of yesterday there were almost 2400 people in these centers.  Primarily these quarantines are in hotels contracted by the government.  One of the first quarantine centers in Jiquilisco, which was subject to significant criticism from the country's human rights advocate, has subsequently been closed. 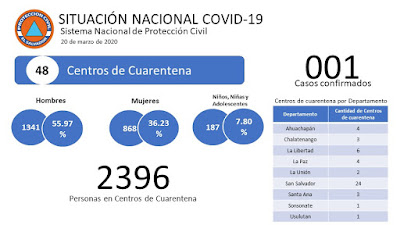 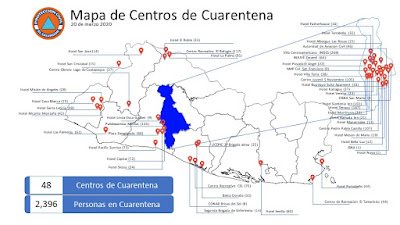 A journalist from El Faro is quarantined in a hotel in La Palma, Chalatenango after arriving at the airport from Mexico.  She tells her story, of a hotel stay where she can leave her room once a day for an hour of sun, here.   She still has 24 days to go.


El Salvador announced on March 18 it would not receive the regular flights of deportees returned from the United States until further notice.  More than 200 deportees who arrived after March 11 are confined in quarantine.   For Salvadorans who were in process of being deported from the United States, the hold leaves them held in detention centers in the US where the conditions of confinement expose them to heightened risks of contracting the virus.

The length of these quarantines has been one of the points of criticism of the government.   While 14 days seems to be the standard for quarantines of persons potentially exposed to the virus, El Salvador has decided to use 30 days instead.   The outcome of this extended quarantine has been an incentive to sneak into the country through “blind points” to avoid being placed in quarantine.  Authorities have been circulating on social media photos of persons arrested for allegedly entering this way.  According to the police and prosecutors, the rector of the national university was apprehended Saturday after making such an attempt.  The rector, through a university spokesman, denied the report and asserted he had entered the country at a regular location and voluntarily submitted to quarantine.

To further limit the country's exposure to infections from abroad, Bukele tweeted on March 17 that he was closing the international airport to all passenger flights. 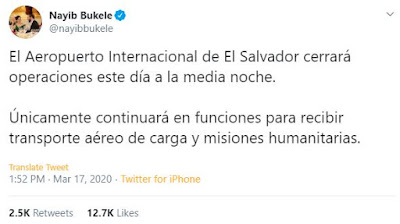 Limiting the potential for spread of the virus within the country.

To increase "social distancing" among Salvadorans Bukele has now imposed tonight's nationwide home quarantine.  Up to this point, the government had already taken a series of measures through decrees issued by Bukele and through actions of various government ministries, and local governments:


The phrase of the day is quedate en casa – stay at home.

Even without widespread illness, the economic impact in El Salvador of the global pandemic will be severe.  To address these losses, the Salvadoran government has suspended billing for three months for water, electric and telephone, cable and internet for persons who can show their incomes were affected by the pandemic measures.  Credit card and loan payments are frozen as well.  Protections from job loss were enacted for those who could not work due to the virus or quarantine measures.

Those protections from being fired don't help the street vendors of the informal economy who can't remain at home.   El Faro has this photo gallery of those who depend on walking the streets to make a living.  They are supposed to now receive a $300 payment during the 30 day national quarantine.

The government put in place price limits on alcohol gel and face masks and plans to fix prices for basic foodstuffs.

The government is designating $2 billion towards dealing with the emergency. 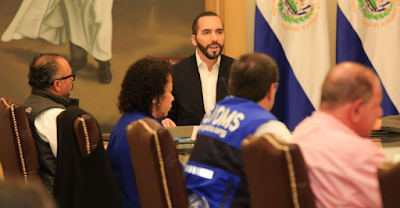 Suspension of constitutional liberties.
Before the country had seen its first confirmed case, Bukele went to the Legislative Assembly to grant him broad powers to deal with the pandemic.  The lawmakers unanimously approved the emergency decree.   Although the decree appeared to grant Bukele all the powers he needed, Bukele also asked the Legislative Assembly to suspend constitutional freedoms of freedom of movement and freedom of gathering together in groups.   Such a law of exception would protect Bukele from having quarantines, curfews and limitations on gatherings subject to constitutional challenge in the courts.  The Assembly ultimately approved the law of exception, but it was not unanimous, and many deputies refused to put their names on the law and instead had their alternates vote.

Human rights experts cautioned against wholesale abandonment of constitutional principles and human rights even in the face of a pandemic.  The Constitutional Chamber of the Supreme Judicial Court declined to issue an injunction against the emergency measures, although it agreed to consider some of the issues.

From a piece titled In Central America, efforts to slow spread of coronavirus could lead to 'autocratic tendencies' at WLRN:

While public health and medical workers worldwide agree on the urgency of the pandemic, human rights observers say they are becoming increasingly concerned with how some political leaders in Central America may use their emergency powers.

“It’s a tool that could be arbitrarily used and abused,” said Celia Medrano, of the human rights organization Cristosal.

This is particularly troubling in the case of El Salvador, Medrano said. The country emerged from a civil war less than 30 years ago in which the military frequently violated citizens' human rights. Just two months ago, Bukele barged into congressional chambers with the police and military demanding lawmakers approve a loan he was requesting. Bukele has said he would use military force again to break up groups during the pandemic.

“It’s clear this president has been, to be charitable, tempted by autocratic tendencies,” said Geoff Thale, of the Washington Office on Latin America, a human rights advocacy organization. “In a country with this kind of history, that’s a real concern.”

Bukele insists that dramatic actions need to be taken immediately to flatten a possible curve of growth of the epidemic of COVID-19,  Action is needed to avoid a future complete collapse of the healthcare system.  He is right.  The challenge is returning to a strong democratic El Salvador once this life-threatening emergency is over. 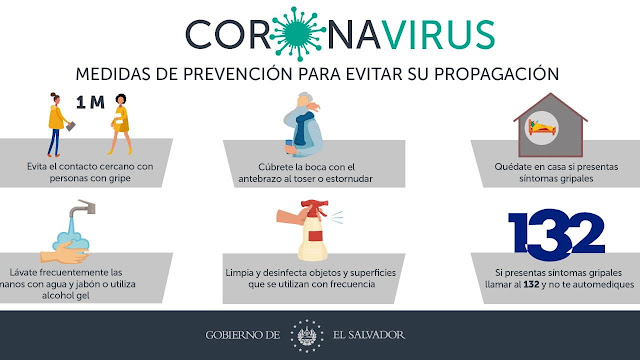 UPDATED 3/22 to include the denial of the national university rector.
COVID-19 Economy Healthcare Nayib Bukele