The armed forces of El Salvador 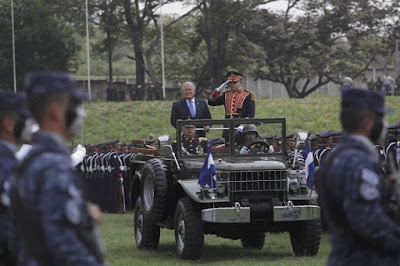 May 7th in El Salvador was the Day of the Soldier, a national day for honoring the country's armed forces.   The day is marked with military spectacle and speeches from the president and military leaders.   The armed forces released a video for the day:

So it is appropriate to take a short look at the role the armed forces play in El Salvador today.

With a population of approximately 6.5 million people, and land area the size of the US state of Massachusetts, El Salvador has a military with approximately 20,400 members. The budget for the Ministry of Defense during 2018 was approximately $175 million.   The military has three branches -- army, navy and air force.

The Salvadoran air force currently has 50 personnel in a helicopter unit deployed with a United Nations mission in Mali.  El Salvador has had troops deployed as part of this African mission since 2015.   Between 2004 and 2008 under president Tony Saca, El Salvador had more than 300 troops on the ground in Iraq as part of a US led coalition.

Considering that the UN Truth Commission Report found that the Salvadoran military was guilty of killing the vast majority of the 75,000 civilians killed in the country's 12 year civil war, it might be surprising to know that in polling at end of 2017, the armed forces were the government institution in which Salvadorans had the most trust, trailing only the Catholic and evangelical churches.   This polling result has been replicated for ten years or more. 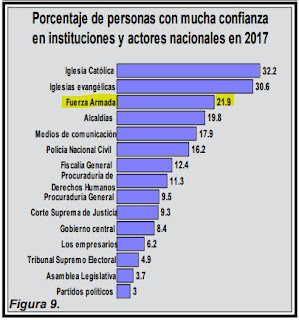 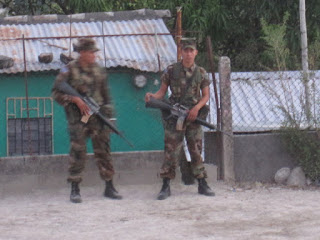 In today's El Salvador, it is common to see armed troops in just about any corner of the country, from the streets of the capital to towns in the rural departments of Chalatenango or Morazan.   The primary function of today's military in El Salvador is assisting the National Civilian Police with combating the country's street gangs.   Troops have been engaged in crime fighting since the administration of Tony Saca, but the largest increase in military units patrolling streets and barrios within the country has come during the Funes and Sanchez Ceren administrations.

In 2016, for example, the government of El Salvador deployed a new heavily armed unit to fight criminal gangs in rural areas.  The 1000-strong special force is equipped with helicopters, armored cars and assault weapons.


The military tweets out video summaries of its work on domestic crime fighting:

Under El Salvador's constitution and the 1992 Peace Accords, public security is the job of a professional, civilian police force to be completely separate from the Armed Forces. The President is allowed to call out the armed forces, only in exceptional circumstances after he has exhausted all ordinary means of maintaining public order. (El Sal. Const. Art. 159 and 168) For many in El Salvador, the extortion and murder afflicting many communities, now justify such extraordinary measures. It is an age old question which many societies grapple with -- how much civil liberty are are citizens willing to cede to their government in return for physical security?  In 2014, the Constitutional Chamber ruled that the use of troops in the streets did not violate the constitution.

The same Constitutional Chamber has had to rule against the armed forces in cases where it is alleged that troops on patrol in disadvantaged neighborhoods  "disappeared" young men who had no gang connections.  I wrote about those cases here.


The country's former attorney general has also reported an extermination squad within the military  in which senior military officers were implicated.

Along with agents of the PNC, soldiers have increasingly been targets of murders by the gangs.  Already 10 soldiers and 14 police have been killed by the gangs in the first four months of 2019.

El Salvador's military command has never acknowledged the involvement of Salvadoran troops in massacres and other crimes against humanity during the country's long civil conflict.   Although presidents Funes and Sanchez Ceren, as commander-in-chief of the armed forces, have acknowledged the abuses and have apologized on behalf of the Salvadoran government to the victims, no Minister of Defense or subordinate officer has ever done so.  In fact, the current minister of defense, David Munguia Payes, referred last week to some of the massacres as "legends" influenced by "propaganda."

As of this writing, we do not know who Nayib Bukele will appoint as his new Minister of Defense. 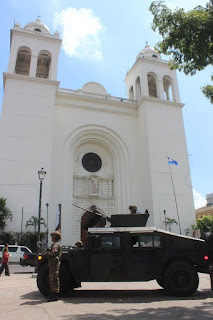