What's in a political slogan

I have noticed in the past few weeks that the Funes and Avila campaigns have started to emphasize new slogans. The new slogan for ARENA is "Vota con Sabiduría" -- Vote with Wisdom. There is a de-emphasis on the original campaign slogan "Pais Mas Justo" -- A More Just Country. This new slogan goes hand in hand with advertising by ARENA and its political allies which emphasizes fear of the FMLN as communist guerrillas responsible for years of conflict in the country. The new message is -- think about that violent past before you cast your vote -- vote wisely.

The new campaign slogan being emphasized by the Funes campaign is "Esta vez es diferente" -- This time is different. You can listen to a jingle with this slogan at www.mauriciofunespresidente.com I can't say that I am a real fan of this slogan, because it rings a little defensive. It seems to be saying -- let's forget about our big loss in the 2004 presidential election, now we finally have a credible presidential candidate. Frankly I still prefer the original slogan "Nace la esperanza. Viene el cambio" -- Hope is being born. Change is coming.

Slogans can be tricky things. Avila's foes are having fun with the vote wisely slogan: 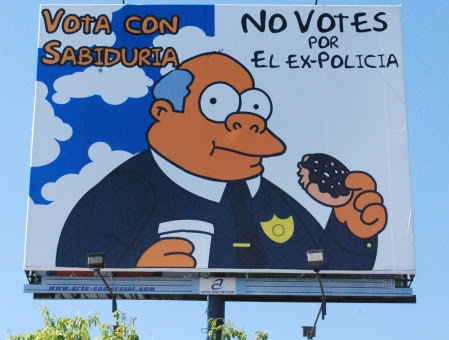 Sorry about my long comment in Spanish Tim, but it's for the people who may visit your blog and may not speak English.

My comment is about the interview of Rodrigo Avila with Jorge Ramos from Univision, that was aired in the US last Sunday.. For many reasons that we already know, TCS didn't broadcast that interview in El Salvador.

TCS didn't broadcast that interview to protect Avila's image, because It's so sad and funny at the same time to watch him ridicule himself on live TV;

it was a political suicide when he avoided to answer the question: "Mr Avila, have you ever kill someone?" and he admitted indirectly that he had kill "several people" on "self defense" while he was a cop on duty.

Watch the video if you haven't. Go to Univision.com, then go to the videos seccion, then search for "Candidato de ARENA en El Salvador".

Anonymous said…
Samuel thank you so much about the previous comment, something that I cant help in media is the fact that some channels, dont want to say which ones...2.4.6. and some news paper are lacking in impartiality, this is dishonest and only reflects the poor professionalism they have as a media, more and more ppl are seeking through the web as a result of this, BTW, I watched the rodrigo's interview and honestly that was awful, I understand now why he refused to debate on CNN ESPANOL
6:34 AM

And yes, absolutely: Salvadorian media is as objective as the medition of love: it just doesn't exist. Here, you open a newspaper just to read about all the virtues of Avila, and the horrible sins of Funes. Or if you turn on the tv, you'll see the soup opera of "4 visión" (wich, they say, is a news) and you'll see tha partiality working at full force. In brief: El Salvador's media sucks at objectiviness (objetividad)
1:26 PM

Jorge Ávalos said…
"Sabiduría" is a code word addressed to the evangelical community. When two weeks before the election the last public opinion polls appeared, some claiming a dead heat between the candidates, the "undecided" vote was the last frontier. It turns out that the undecided is 80% evangelical. That's why we see both candidates making aggressive outreach to evangelicals. The "Vote with wisdom" slogan on a portrait of Avila with a blue sky behind him has clear religious connotations. "Sabiduría" is the most common term among evangelicals in El Salvador, who seek to have God's wisdom influence their actions.
2:35 PM

Carlos X. said…
I think that in way both "Vota con sabiduria" and "Esta vez es diferente" telegraph an element of nervousness or lack of confidence by the parties. The FMLN is saying: this is not 2004, as Tim sets forth, but I see this is as a smart move. Don't let the obvious go unspoken. Confront it head on! ARENA's slogan also implies a vulnerability. Once you start telling your followers that they have to be wiser, nobler, smarter, better, it's an implicit concession that the average Joe ain't with you, and that you might be losing the argument at some level. But, both slogans have a hidden positive message. For ARENA, the positive implication is obvious: you will be "wise" if you vote for Avila. The FMLN's slogan also is positive. It is saying that this election is special, much the same way Obama got US voters to think of 2008 as a historic election. There are two implicit assurances in the slogan: one, to the FMLN faithful, that says, this time we actually stand a chance, but also a wink to the general public saying, this time you can vote for the Frente, because there's a moderate at the helm who's got broad support for change behind him.
3:28 PM

Randy Jurado Ertll said…
I would like to link our blogs:

I would like to obtain comments in English. My blog is with La Prensa Grafica in El Salvador.

Anonymous said…
Dear Tim:
La Prensa and El Diario De Hoy, with channel 2,4 and 6 are just the noice machine of ARENA, they demonize, and do character assesinations of the people that are not with them. They glorify their stupidity and incompetece with the clothe of nationalism and stupid sloggans.
ARENA as we know has been in power in El Salvador, and they are the opium of the Salvadorean people.The Salvadorean people deserve better than ARENA, and they need to see through the Goebbel's propaganda machine: La Corporacion 2,4, and 6. and El Miedo de Hoy, or La Presa Grafica.
Now, let me explain how this little fragil democracy is being tormented by channel 2,4 and 6 or La Prensa and El Diario.Way before the elections they began the negative campaing, associating Funes with Hugo Chavez, and terrorizing the people with their ads and misinfornmation.The swift junta veterans were behind many ads. I remember seeing that crazy lady that was trying to grab the mic in order to say that Funes was bad, no I am not talking about the crazy old lady in red with the John MCain insident, I am talking about Marisol Argueta de Barillas when she was in the US.
One of the things that Funes has talked about is the immigration problem in El Salvador, why many Salvadoreans are leaving El Salvador for better opportunities??? The fact that Salvadoreans are leaving is a consensus of the lack of opportunities that ARENA has given to the people. If they make opportunities in El Salvador, why would people leave the country of El Salvador??
Now If I was Salvadorean:

Anonymous said…
I agree with the last comment in which there has to be change, but is Mauricio Funes the right change?Is Funes the one who will be in charge or will it be Sanchez Ceren and his whole crew in the back if he gets elected?
come on! We are dealing with the same parties only different faces in front. Arena and FMLN are at both extremes, and given the occasion that it's either black or white and that we can get a happy mediums to choose from, we must ask ourselve is a radical leftist party going to ease all our pains? Is this change the one we're looking for? It hasn't worked in other latin american countries what makes you think it will here? capitalism is the right way to go (China tried to go communist it din't work, now its economy can't be more capitalist), we must stick to what's best, because the economy sucks and that gas is high is not are fucking fault. We don't even produce gas and El Salvador is a 3rd world country we have no control over the globalized issues going on right now. My point is that we must not screwup this weekend... lets choose wisely.
1:09 AM

Anonymous said…
The sad part is that there is no real democratic party in El Salvador and the closes to that is that PCN or what ever that party is called. You can not really say the the FMLN is truely a democratic party based on the principals it was founded on. The founding ex-trouble maker ferudando marti what ever the hell he called himself really caused an uproar to this once peaceful country. Today or maybe tomorrow they will get a chance to prove to the rest of the country that they are not some shady people. I guess only time will tell.
1:19 PM

Anonymous said…
While I do not support the FMLN nor ARENA for that matter after this video interviews with Jorge. Seriously Avila really screwed up. There nothing wrong with killing terrorists in self-defense. You are a cop, make it noticeable and say yes. No need to explain your self, it goes with the job. The trap which was very obivious was whether he killed revels masquerading as innocent civilians. Your answer to this Avila should be "yes" I defended my country from terrorist threatening our peaceful way of life. You see nothing to it.
1:42 PM

Anonymous said…
hi, do you know what el salvador's political allies are and what are their political foes? and what is their economic allies and foes?
Thanks
11:52 AM