Participation of women in Salvadoran politics

February 22, 2009
The sociology and political sciences department of the University of Central America has taken a look at the participation of women in the recently held elections for mayor and deputies to the National Assembly.

Of the 1147 persons running for mayor in municipalities across El Salvador, only 115 (11.5%) were women. A scant 29 of those women won their elections in the 262 municipalities in the country.

Of 427 persons nominated by political parties for the National Assembly, only 103 (24.1%) were women. The elections resulted in women being 16 of the 84 deputies.

The graphic below shows the relative percentages of men(green) and women (blue) as legislators and mayors after the elections: 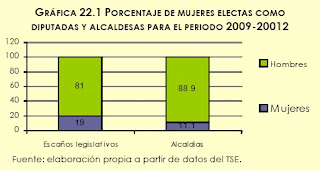 As the article points out, "the data demonstrate that there is no equality of conditions for the participation of women in politics and that inside the parties little has been done so that women can have realistic possiblities of being elected."
Politics

Anonymous said…
rick steves the travel guy from pbs has actually went to el salvador and has written journals about his observations as an outside tourist/explorer. i found this looking up info on es.

Anonymous said…
rodrigo avila's name appears in an article by televisa noticias of mexico questioning his armed presence in the interrogation of four police officers in guatemala linked to the assasination of the salvadoran congressmen in 2007. the four policemen were killed four days after the interrogation, and the other detective, present along with avila, has also been murdered since. here's the link:

We've had a female Vice President (take that, land of Barack Hussein), a Mayor of San Salvador, assorted Ministers all over, there's an untold number of policewomen, the head of the National University was recently a woman, the fricking ministries are filled with people of the female persuasion.

The Sociology and B.S. department of the UCA can take their US-inspired gender and identity politics and they can whine all day long: El Salvador is one of the most open societies and governments worldwide for women to compete mano a mano with men.

What we don't yet have (much) is a class of professional grievance whiners, US-style, or sex quotas European-style.

Anonymous said…
EV--
When you say, "El Salvador is one of the most open societies and governments worldwide for women to compete mano a mano with men" you show your complete and utter lack of any sense of reality. You use of women competing "mano a mano" with men illustrates your patriarchal and sexist mind set. OBTW, it also shows your slovenly devotion to neoliberal free market economics.
1:05 PM

Jorge Ávalos said…
This comment has been removed by the author.
2:00 PM

Jorge Ávalos said…
El-Visitador may be neoliberal but that doesn't mean that he's wrong when he argues that "El Salvador is one of the most open societies and governments worldwide for women to compete mano a mano with men."

Actual participation of women in Salvadoran politics is higher in El Salvador than in the US. According to the Inter-parliamentary Union, as of 2009, 441 members of the US Congress are male (83%) and 92 are female (17%). The global average for female representation at the parliamentary level in 2007 was 17.0%.

So, if electoral participation for a parliamentary seat was 24.1%, that's high. In the last election, according to UCA (and Tim in this post) 16 women were elected for the National Assembly, that's 19% of a total of 84 available seats. That's higher than in the US and two points above the global average.

After living for 20 years in the the US, in San Francisco and New York, I was surprised when I arrived in El Salvador and realized that women's participation in politics did not bring about discussions of equality or discrimination. There are no actual political barriers in their participation in politics. In fact, in El Salvador, women participate very intensely in politics as anyone who visits can see. Also, as EV points out, a high number of women have high level position and very visible positions as ministers or heads of government institutions. In fact, they nearly dominate economic policy programs.

What you need to remember is that public service careers depend on the professional development of candidates. And the barrier for greater political participation by women in El Salvador is due to unequal educational development, which became acute during the war. But in that aspect educational policies since the end of the war have been very successful in fully integrating girls and in keeping them in school. So it's very likely that women's participation in Salvadoran politics will grow steadily over the years and more quickly than in the US.
2:05 PM