Three Salvadoran girls, aged 9 years, 6 years and 18 months, were discovered in bushes on a small islet in the Rio Grande (Bravo) near Piedras Negras on Wednesday.  Little is known publicly about how or why the girls ended up in this spot on the border with the US, but it is suspected they may have been abandoned there by migrant smugglers.  A video from the Mexican government shows the moment when they were picked up by authorities in a boat.

For decades, a major reality for El Salvador has been the outward flow of its inhabitants towards the US.   The discovery of these children at the border reminds us that the river northwards has not ceased under the presidency of Nayib Bukele.  Today we take a look at the numbers behind migration as El Salvador enters 2023.

The only real statistics we have regarding the total number of Salvadorans leaving the country are reflected by the numbers reported as being "intercepted" or "encountered" at the southern US border by authorities.   This includes both people crossing clandestinely and being captured, and those who cross openly at or outside ports of entry and turn themselves into authorities in order to request asylum.  Since these numbers do not include persons who sneak in and were never "encountered," the actual numbers are assumed to be higher than these.  They also do not include Salvadorans who may be found within the crowds of migrants desperately encamped on the Mexican side of the US border, and those who perished on the way, or are still en route.

The chart below incorporates the official statistics of US Customs and Border Patrol for the past 11 fiscal years (FY) of the US government.   (A fiscal year runs from October 1 to the following September 30, so FY2022 ended in September 2022). 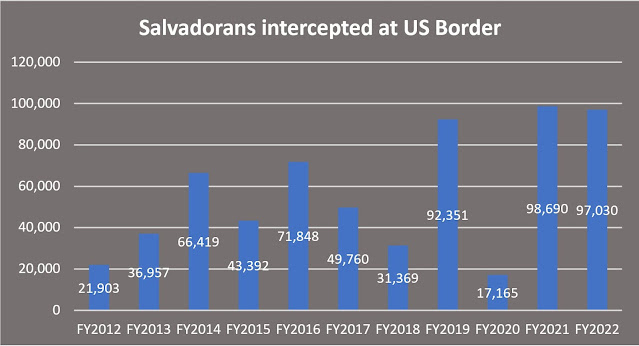 As this chart shows, the three years with the highest totals of Salvadorans apprehended at the US southern border, FY2019, FY 2021 and FY2022,  all occurred during Nayib Bukele's presidency.
[Another challenge in interpreting these numbers in FY 2021 and 2022 is the impact of Title 42.  Persons (primarily single males) expelled under this measure are dumped back across the border into Mexico and if caught trying again could be double-counted].

There might be some signs of slowing migration in recent months.  After climbing steadily for the first six months of calendar 2022, the number of Salvadorans encountered at the southern US border declined the five months from July to November 2022. It's too early to tell if this trend will continue.

But Nayib Bukele and his government do not acknowledge the record flight of people from the country, and instead claim there is record improvement from the past.  Throughout 2022, there has been a misleading use of statistics by Bukele and his ambassador to the US, Milena Mayorga, celebrating El Salvador's ranking as a sender of migrants to the US.

There has been a dramatic increase in migrants trying to cross at the US southern border in 2022 from countries, like Haiti, Cuba, Venezuela and Nicaragua, while migration from El Salvador has remained at a constant annual level. As a consequence, El Salvador's relative share of the migrants being apprehended has fallen.  This means only that asylum seekers from these other countries make up a larger share of the total, but it does not mean, as we have seen, that fewer Salvadorans are leaving for the US each year.

After being in the top 3 of the countries that sent the most migrants to the United States… Now we are not even in the top 10! There is still a lot to do, Rome was not built in a day; but we are advancing by leaps and bounds. The only ones who don't see it are the ones who don't want to see it.

I might respond that the ones who don't see it are the ones who actually analyze the data and understand it.
Involuntary returns
The flip side of outward migration are removals or deportations.  The number of Salvadorans being deported back home increased significantly in the first six months of 2022 compared to the same period in 2021 according to statistics from El Salvador's migration ministry (DGME):

Added to this, the number of Salvadorans living in the US who are at risk of being deported today exceeds half a million.  According to its 2022 Annual Report, there are 543,627 Salvadorans on what ICE refers to as the "non-detained docket."  That means they have either received a final order to be deported from the US and are still living in the US, or they have an open removal case in immigration court.  Some of those could be temporarily protected from deportation by a status like TPS or DACA. 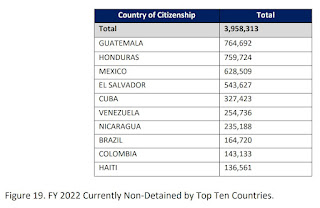 Source: ICE FY2022 Annual Report
In addition, there were also 1,045 Salvadorans sitting in immigration detention facilities at the end of September 2022 awaiting their removal proceedings.
As of December 2022, 167,620 open removal cases were pending against Salvadorans in US immigration courts, part of the backlog of more than 2 million cases in the entire US immigration court system.  Source: TRAC Immigration database.
Currently protected from removal are the approximately 195,000 Salvadorans who hold Temporary Protected Status or TPS through at least June 2024, although a pending court case may result in the termination of TPS after that.   Also protected by DACA are roughly 26,000 Salvadoran "Dreamers", but they may lose their protection any day, as an adverse court decision is expected to eliminate the program.  The US Congress failed to enact any reform to protect either TPS holders or Dreamers before the Republicans took control of the US House of Representatives this month, and that party vows to approve no immigration reform measures.
The crime rate in El Salvador during the Bukele presidency has been significantly below that in prior periods, and yet, as discussed above, the outward flows from El Salvador have been at record levels in recent years, excluding the 2020 pandemic year. This fact points out the importance of other factors beyond gang violence pushing people out of the country such as the lack of economic opportunity, climate change producing droughts and floods which destroy a family's crops, and the desire to be reunified with family already living in the US.
Only when root causes are addressed will the dynamics of migration turn around.
Next in our series on El Salvador at the beginning of 2023:  US relations
Migration