Tucker Carlson LOVES Bukele; others not so sure

Despite the small size of El Salvador, president Nayib Bukele manages to be a regular subject of international press attention.  Perhaps most prominently, Bukele appeared November 1 on the streaming program of right-wing US television host Tucker Carlson. During their hour long English language conversation, Carlson praised Bukele for his wisdom while Bukele offered up his opinions on global macroeconomics, adoption of Bitcoin, and how the international media and economic press is "Fake news" and propaganda.  Bukele then had Spanish subtitles added to the show and made it available on his official Twitter feed for Salvadorans.  (Here is the full Bukele interview with Tucker Carlson). 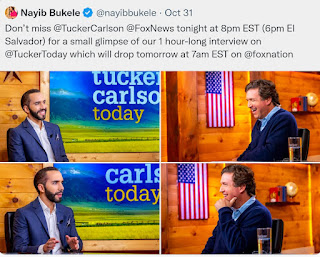 A look at the recent international economic press shows why Bukele has no fondness for it:

And still there is not a sign of those “volcano bonds” which Bukele promised in November 2021 would fund his futuristic "Bitcoin City."

Bukele's appearance with Tucker Carlson could well have been directed towards the Salvadoran diaspora in the United States.  El Salvador's Legislative Assembly recently passed legislation to facilitate voting by Salvadorans abroad in the upcoming 2024 elections for all elected positions in the country, including voting by internet.

Nayib Bukele will be on the 2024 ballot, and he has strong support in the diaspora, as the Los Angeles Times describes in an article with the unfortunate title El Salvador President Bukele’s reelection bid stokes L.A. immigrants’ fears of new civil war:

But reelection is a very popular idea not only in crime-weary El Salvador, where Bukele’s approval ratings have never fallen below 80%, but among the estimated 2.3 million Salvador Americans living in the United States, which includes 421,000 in Los Angeles County. Tensions from the homeland spilled into L.A. earlier this year when a large faction of Bukele supporters demonstrated at MacArthur Park. Police intervened to keep them apart from a much smaller anti-Bukele contingent. Supporters and opponents of Bukele also squared off in June when the Summit of the Americas was held in downtown L.A….Among Salvadorans in Southern California, Bukele fans appear to greatly outnumber Bukele foes. Organizations such as Salvadorans Abroad, which has branches in the United States, Mexico, Central America, Canada, Europe, Asia and Australia, have voiced their support for Bukele’s tough-on-crime, so-called mano dura approach, and blame resistance to it on radical leftists and corrupt elites.

El Salvador’s Slide Toward Authoritarianism where he concludes:

Decades of U.S. policy and ARENA-FMLN rule created this populist moment, while denying alternatives. Rather than rupture, Bukele represents extreme continuity, personifying the market fundamentalism and systemic violence that brought him to office. Ironically, the last president to seek immediate reelection was General Hernández Martínez. And the poor youth that his administration packs into prison represent the very social groups that his predecessors targeted in La Matanza and the civil war.

AP describes how Salvadoran authorities went into cemeteries in different parts of the countries and destroyed the tombstones of gang members. Bukele's advertising machinery produced video tweeted by the Directorate of Prisons showing minimum security prisoners going into a cemetery with sledge hammers and breaking up a monument with the initials of MS.