In recent days, El Salvador's Attorney General, has decided to prosecute two Salvadorans for what they published on Twitter.  While Nayib Bukele has often said that his government does not lock up protesters or critics, that might appear to be changing.

The first of these persons is  a tech worker named Luis Alexander Rivas, who had been tweeting under the anonymous Twitter account @_elcomisionado_.  Rivas has used that Twitter account, where he has 8400 followers, to be a vitriolic critic of the Nuevas Ideas-controlled government.

Rivas was initially arrested on August 21, shortly after he published a tweet with a photo criticizing the use of public funds in a deployment of public security forces at the beach providing security for the president's brother Karim Bukele and his family. It certainly wasn't the first time that Rivas had tweeted critiques of the president's family. His tweets have often been directed at first lady Gabriela Bukele as well.

Although the charges against Rivas have nothing to do with the war on gangs under the State of Exception, authorities took advantage of the suspension of due process protections under the emergency decree to wait 14 days before he received an initial hearing on Monday, September 5.  (Outside of the State of Exception no more than 72 hours should pass between arrest and initial hearing).  For much of that time his whereabouts were unknown to his family, and authorities would not reveal what charges were being lodged against him.   A campaign demanding his release sprang up on Twitter almost immediately. 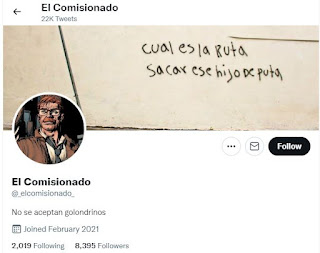 On Monday, September 5, Rivas was finally brought in front of a judge.  Prosecutors told the judge they were charging him with the crime of "desacato" or disrespect of a public official.  "Desacato" is defined under Art. 339 of the Salvadoran criminal code as offending the honor or integrity of a public official through word or deed, or to threaten a public official in person or through a writing.  And the offended persons, prosecutors told the judge, are the Public Administration of El Salvador and President Nayib Bukele.  Its not clear whether prosecutors were using the tweet about Karim Bukele on the beach as a basis for the charge, or if that tweet was simply a triggering event.

Juan Pappier of Human Rights Watch tweeted that "The crime of desacato, as provided for in Salvadoran law, contradicts international standards on freedom of expression."

The court did not dismiss the charges on Monday, but ruled that Rivas could be released on bond and would not need to be held in prison while his case was pending  (unlike the fate of the 50,000 others arrested during the State of Exception who are overwhelmingly not released).

Prosecutors apparently were under orders not to let Rivas walked free, because they promptly arrested him on new charges and took him back into custody right after the hearing.  The nature of the new charges was not disclosed.

An arrest warrant has been issued against Luis Alexander Rivas Samayoa.

Freedom of expression is one thing and attacking the integrity of people is another.

Freedom of expression cannot be used to commit crimes.

According to a short interview which an El Faro reporter managed to have with Rivas through the window where he was being held, police were searching his phone and insisting that he tell them about a network of opposition trolls to which he supposedly belonged and that he tell them who was paying him.   Rivas asserts he belongs to no such network.
In another case against a social media personality, the FGR announced charges against Sifrido Alexander Orellana Meléndez (Alex Umanzor) for incitement to violence and to overthrow the government for a video published on Twitter where he is alleged to be "making a call to disrespect the constitutional order" established by the laws of the country.
A Youtuber Roberto Silva is currently being prosecuted for expressions of violence against women for statements he made about then-FMLN deputy Karina Sosa.  His sexist and offensive remarks landed Silva in prison and a judge recently ruled that his case can proceed to trial.
Political Twitter in El Salvador is full of trolls, insults, disparagement and plenty of "desacato" directed at public officials and political opponents.  The insults are tossed out as often by those in power as by critics of the government.  Nayib Bukele and his top allies play the game as well.
I don't condone the misogynistic attacks on female politicians, homophobic slurs, or crude and offensive insults which are par for the course on all sides in this world of Twitter trolls.   But it's a dangerous precedent whenever the government can prosecute someone criminally and put that person in prison for words which "give offense" to some public official.  It gives free reign to the government to pick its most vocal critics up off the streets. That threat of prosecution has the obvious power to stifle vigorous debate and criticism as opponents to government policies worry that their critiques might "offend" a public official.
FGR Human Rights Nayib Bukele Social media

Concerned citizen said…
Yes, it is especially hypocritical since every day the government posts slanderous photos of persons arrested under the suspension of constitutional rights and tags them as terrorists, even though many have no criminal or prison record, no gang ties, no gang tattoos and at the same time, the government provides no proof of criminal activity. These publications result in much more serious consequences than the criticism of questioning use of public funds: loss of job, loss of income, ruined reputation, and terror for the family who is denied rights to visit, to a defense, and to due process.
1:59 PM

Lawrence M. Ladutke said…
It is important not to lump online gender based violence (including threats, doxing, and psychological attacks) with desacato. That's like lumping in Trump supports calling for Mike Pence's death with people who offended Trump by saying the truth about the 2020 election. The threats against women and against Pence need to be prosecuted. Bukele and Trump facing criticism are part of the job for politicians.

"Overall, our findings paint a worrying picture that Twitter can be a toxic place for its female users. The company’s failure to meet its responsibilities regarding violence and abuse means that many women are no longer able to express themselves freely on the platform without fear of violence or abuse."