In a speech to the nation on the evening of El Salvador's Independence Day, September 15, president Nayib Bukele announced that he will run for re-election in 2024.  Bukele asserted that he has been the first leader, acting at the will of the people, to achieve “true independence” in the 201 years since El Salvador came out from under the Spanish crown.  It seemed that the whole of the day's celebrations had been designed as a lead up to announcement of his candidacy.

The day began with a military parade in San Salvador.  The Bukele government put the strong arm of the state on display in the parade filled with all the units of the military and police security forces.  It took more than two hours for all the marching troops to pass by. 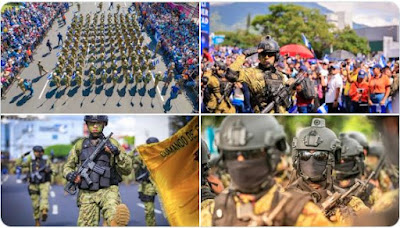 Marching past statues of the Divine Savior of the World and Saint Oscar Romero, were thousands of troops, most carrying automatic weapons.  There were flyovers by military helicopters, jets, and drones, passing repeatedly over the parade route.  Several types  of armored tactical vehicles were featured.  The parade came complete with a simulated capture of gang members by military special forces members in front of the parade watchers.

Government social media feeds were filled with either pictures of smiling Salvadorans dressed in blue and white and waving Salvadoran flags, or heavily armored troops and police marching in lockstep through the city streets.

Only after all the branches of the armed forces and all the units of the National Civilian Police had marched by, did marching bands from local schools, and youth dressed in cultural costumes, and flag waving children pass by on the parade route.

At the same time troops were on parade, protesters marched to Plaza Libertad in the historic center of the City.  The marchers carried signs and banners denouncing a variety of actions of the Bukele regime, from arbitrary detentions under the State of Exception, to Bitcoin, to the the ruling by constitutional judges put in place by Bukele which permit him to run for a second successive term as president.

Although the news that Bukele would run for re-election comes as a surprise to nobody, the announcement was made to rapturous applause by the officials in his government gathered in the Presidential Palace to hear the Independence Day address. 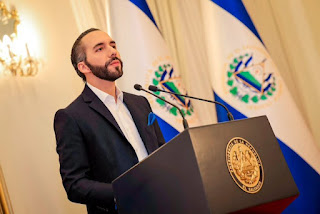 These were the steps that Bukele indicated in tonight's speech were necessary to achieve "true independence":  (1) depose the five top judges in the country, (2) depose the attorney general, (3) install new judges and an attorney general hand-picked by the Bukele team moments later, and (4) fire one third of the lower court judges.  Those steps were closely followed by the newly installed magistrates of the Constitutional Chamber making possible five more years of rule by Bukele.  And so tonight, having achieved independence of any checks and balances in the country, Bukele announced he will run for re-election in 2024.