Almost daily rainstorms in El Salvador this September have produced a variety of damages across the country. Although the country has not been in the direct path of any hurricanes or tropical storms this season, weather patterns have brought heavy rains time and time again.   With soils now heavily saturated with moisture, flooding, landslides, and falling trees become an increasing hazard.

Fourteen people have perished in different parts of the country during September as a result of weather events. 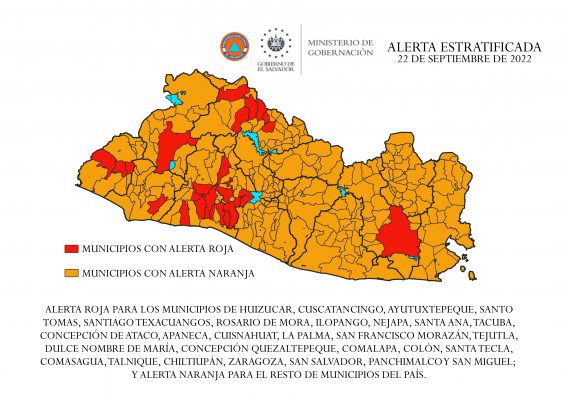 As of this writing, 28 municipalities are under red alert and the rest of the country is under orange alert.  In the past 24 hours, just as an example, there were 11 landslides, 6 fallen trees blocking roads, 2 damaged homes, 1 damaged car, 3 collapsed walls, and 2 fatalities in rushing waters on different sides of the country.  176 Salvadorans from 49 families were living in 10 temporary shelters.

Farms in different parts of the country have reported agricultural losses from fields left underwater.

On Thursday, September 22, seven people died when buried in landslides in Huizucar and Panchimalco just south of the capital San Salvador.

Classes nationwide were cancelled on Friday, September 23 on account of the possibility of flooding and landslides.

Streets of the city of Santa Ana turned into rivers on Saturday, September 24, as you can see in this collection of social media videos from LPG:

In a normal year, the rainy season in El Salvador will taper off starting in the second half of October.