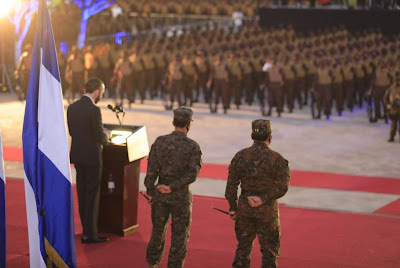 The history of El Salvador's military during the 20th century was filled with violations of democratic rule and basic human rights.   Decades of military dictatorship began in 1932 with General Maximiliano Hernández Martínez, who ordered "La Matanza", the massacre of 10,000-20,000 mostly indigenous campesinos after a peasant-led uprising.   There would follow 47 years of governments imposed by the military and sham elections.

During El Salvador's civil war from 1980-1992, the military would be responsible for massacres killing tens of thousands of civilians. The largest single massacre in Latin American history, the the massacre at El Mozote and surrounding communities, left a thousand dead, including more than 400 under the age of 12.   In 1989, a military squad would invade the campus of the University of Central America and kill 6 Jesuit priests, a female employee and her daughter.

Throughout those decades, the Salvadoran military acted as a tool of repression on behalf of the wealthy oligarchy in the country.

Now, fast forward thirty years from the end of the civil war to September 15, 2022, Independence Day in El Salvador.  The national celebration put together by the government of Nayib Bukele had as its centerpiece a military parade.   (There had even been an edict earlier in the week that no local school celebrations could take place until the national parade of military and police units had occurred, but that edict was largely ignored across the nation).

The Salvadoran armed forces occupied the place of honor at the front of the Independence Day parade.  For more than 90 minutes, all the elements of the Salvadoran armed forces marched in lockstep past the Divine Savior of the World monument and a statute of Saint Oscar Romero. Thousands of troops carrying automatic weapons strode past flag-waving Salvadorans and their children. Overflights by military helicopters, jets, and drones, passed repeatedly over the parade route.  The parade came complete with a simulated capture of gang members by military special forces members.

Announcers on the government television broadcast gushed about the valiant heroes of the country and all of the modern armaments and tactics with which they were equipped. The government-sponsored messaging linked patriotism and love of country with praise and celebration of the military.

This exaltation of the military with a role in fighting domestic criminals like the gangs is far from the spirit of the peace accords which ended El Salvador's civil war.  Those agreements included provisions designed to return the military to its barracks and to remove it from any domestic policing and security role. In a 2016 column,  editorial writers of the Jesuit-run University of Central America (UCA) explained:

The Chapultepec Peace Agreement dedicated its broadest and most detailed chapter to the institutional reforms of the Army. The core of the reform was to remove public security functions from it and constitutionally assign it the mission of guaranteeing the sovereignty of the State and the security of the territory. Thus, the reform of its doctrine, at least on paper, was based on the distinction between the concepts of security and national defense. ...

Under El Salvador's constitution as amended by the 1992 Peace Accords, public security is the job of a professional, civilian police force to be completely separate from the Armed Forces. The president is allowed to call out the armed forces, only in exceptional circumstances after he has exhausted all ordinary means of maintaining public order. (El Sal. Const. Art. 159 and 168).
But the years following the signing of those peace accords saw the dramatic rise in the violence and territorial control of gangs in El Salvador.  Those gangs, MS-13 and Barrio 18, had their origins among Salvadoran refugees in Los Angeles, many of whom had fled the abuses of El Salvador's military and security forces, but were later deported.
For large portions of the Salvadoran public, combating gang violence constitutes the exceptional circumstances which permits the army to return to a domestic security role. It is an age old question which many societies grapple with -- how much civil liberty are citizens willing to cede to their government in return for physical security? In 2014, the Constitutional Chamber ruled that the use of troops in the streets did not violate the constitution.

Since that 2014 decision, the active role of the armed forces in public security and policing has rapidly increased. The 2016 UCA editorial continued:

The great paradox is that the Army ended up revitalized by those in Chapultepec who most advocated for its reduction and purification. With the support of notable members of the FMLN, the Armed Forces not only grew exponentially in the number of active troops and personnel deployed in security functions, but also expanded its powers: it began to carry out patrols, searches, arrests, and seizures; implanted new operational centers for criminal control in the cities; and took control of the borders, penal centers and the international airport.

The UCA expressed those concerns about the military role in domestic security in 2016, while Salvador Sanchez Ceren of the FMLN was the president.  Under his successor, Nayib Bukele, along with Merino Monroy, the Minister of Defense, both the size of the military and its role in domestic policing have exploded. 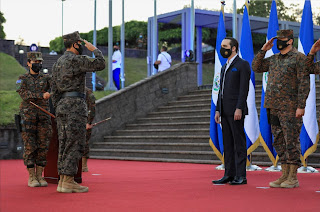 Their armed forces are a military focused on internal enemies. While there were some references in the Independence Day parade to external threats -- narco-traffickers moving drugs off the shores of El Salvador, or El Salvador’s participation in UN peacekeeping efforts -- domestic security is the overwhelming focus of the heavily armed troops of today's Salvadoran armed forces.
In July 2021, Bukele announced plans to double the size of the armed forces in the country.  This chart, published by GatoEncerrado, and using government data, shows the dramatic growth in the military budget under Bukele.
Since Nayib Bukele assumed the presidency, he has worked assiduously to ensure that he has a military highly loyal to him. He has elevated their position within the country, has announced plans to expand their ranks by 20,000 soldiers, and has increased their annual budget by more than $110 million. The military has gone on a spending spree for armored vehicles, new weapons and body armor, all celebrated by Bukele and the government’s social media image machine.
And the Salvadoran military has responded with expressions of its loyalty to Bukele.   An early prime example of this occurred in February 2020, when Bukele was demanding the Legislative Assembly come into session to approve a $109 million loan to modernize equipment for the military and police.  As the tensions with the Assembly mounted on February 8, the military issued public statements proclaiming their loyalty to Bukele. The top military command convened a press conference to read a statement without taking questions:
The Salvadoran armed forces twitter account sent out photos of the troops saluting Bukele:
The next day, February 9, 2020. Bukele marched into the chambers of the Legislative Assembly accompanied by armed troops.  The military had made it clear to which branch of government it was loyal.
In the months since, the Bukele image machine has pumped out the message that the military is the guardian of the people.  A 2021 video tweeted by defense minister Monroy shows how the military portrays itself as the protector of the people in their local communities:

In the places where we have launched phase 4 of the #PlanControlTerritorial, we maintain a permanent presence 24/7.
At this time we are carrying out patrols in different neighborhoods of Soyapango so that citizens can rest easy during these vacations.

Under the current State of Exception, there is no pretense that the armed forces are acting as an adjunct to the civilian police. Soldiers patrol separately from the PNC, detain persons suspected of being affiliated with the gangs, and carry them off to detention.  The armed forces tweet out photos of the suspects they have captured on a daily basis.
In their excellent September 2020 article titled Dilemmas and paradoxes of El Salvador’s Armed Forces, Otto Argueta and Knut Walter write about the history of the Salvadoran military in the domestic life of the country. They describe the military's role today under Bukele:

[The Salvadoran armed forces have] figured prominently in Bukele’s decisions regarding public security, pandemic containment, and political pressure on other branches of government. The paradox is now obvious. An administration that arose out of a broad political movement and replaced the traditional political powers dominating El Salvador’s democracy over the last 30 years, is now strengthening its position by resorting to unconstitutional measures with the support of an institution — El Salvador’s Armed Forces — whose separation and independence from political involvement is fundamental to a strong democracy.

The military parade on Independence Day continued El Salvador down this path, as Bukele gave the armed forces the place of honor in the country’s celebration of its national day.  Later in the day, units of the military stood at attention just outside the hall in the presidential palace where Nayib Bukele announced that he would stand for reelection in 2024, despite a prohibition on consecutive presidential terms in the Salvadoran constitution.
El Salvador's armed forces are supposed to be apolitical, non-partisan, but the official twitter account @FUERZARMADASV was quick to retweet this announcement from the office of the president, their commander in chief, that the Salvadoran public is celebrating that Bukele will be a candidate for president in next elections. 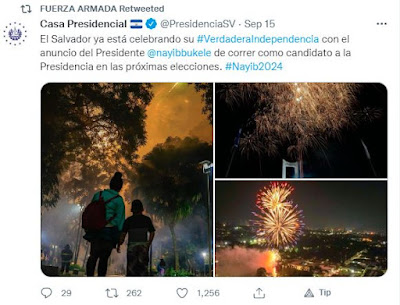 El Salvador is already celebrating its #TrueIndependence with the announcement by President Bukele of running as a candidate for president in the next elections. #Nayib2024

The lessons of the 20th century in El Salvador appear to have been forgotten.  The abuse of democratic order and the commission of atrocities by the military trouble few in Bukele's camp.   When Bukele talks of the suffering of the civil war, he refers to it being inflicted by outside powers, not by the country's own soldiers following the orders of their military commanders in the government.  Today, all sins are forgiven for those who will swear loyalty to Bukele.