Archbishop of San Salvador does not reject Bukele reelection plans 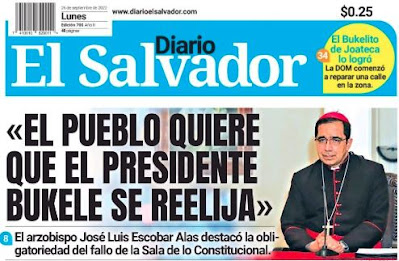 Going along with the prevailing sentiment in El Salvador, the archbishop of San Salvador, José Luis Escobar Alas, at his Sunday press conference indicated that the great majority of the people want, and will get, the opportunity to reelect Nayib Bukele in 2024.  From Rhina Guidos' reporting in National Catholic Reporter:

"The people have been disappointed, and now they see a light in the path ahead," which is why many overwhelmingly want the president to run again, Archbishop José Luis Escobar Alas said during a Sept. 25 news conference, where his comments were taken as tacit support for President Nayib Bukele.

Bukele's administration quickly disseminated the archbishop's comments via social media, posting them the following day on the front page of a government-run newspaper with the archbishop's photo and words above the fold.

People "want" many things, but if they go against what the constitution says, it doesn't make it legal, argued Paulita Pike, a Catholic active in the Archdiocese of San Salvador. She asked the archdiocese on Twitter if that applies to everything, including abortion, which the Salvadoran Constitution forbids.

Human rights advocates and others who affirm that El Salvador's constitution plainly prohibits Bukele from running for reelection, took to social media to condemn the archbishop's statements.   Ruth Eleonora Lopez of Cristosal:

Let us be afraid of being demagogues and coveting the false flattery of the people. If we do not tell the truth, we are committing the worst sin: betraying the truth and betraying the people. -- Monseñor Romero [tagging the Twitter account of San Salvador archbishop]

Responding to this criticism, Escobar Alas later issued a video statement saying that he was not opining whether or not the constitution prohibited immediate reelection because that was not within his competency. The archbishop continued to say, however, that the competent authorities, the Constitutional Chamber and the Supreme Electoral Tribunal, had ruled that reelection was permissible.  There was no mention of the fact that the magistrates of the Chamber had been improperly put there by the Bukele regime, and that Bukele and his allies also control the majority of the TSE.  Bukele promptly tweeted this statement to his 4.2 million followers as well.

Bishops from other areas of El Salvador spoke out in La Prensa Grafica to say that Escobar Alas' statements were not statements of the country's Roman Catholic Conference of Bishops.  The bishops of Zacatecoluca and Chaltenango both publicly distanced themselves, as did a third bishop who told La Prensa Grafica he wanted to remain anonymous.

The role this archbishop plays is a far cry from the role played by slain archbishop Oscar Romero (whose portrait, ironically, was behind Nayib Bukele on September 15 as the president announced his intention to run again for president in 2024).  Escobar Alas has limited his criticisms of the State of Exception to asking that there be due process to prevent innocent persons from being condemned, while also noting that "the people" feel more secure under the measures.  When family members who alleged their loved ones have been arbitrarily detained sought to speak with him at this Sunday's press conference, Escobar Alas avoided them.

The office of the current successor to Oscar Romero as archbishop appears to have been neutralized as a force to stem the authoritarian march of the Bukele regime.