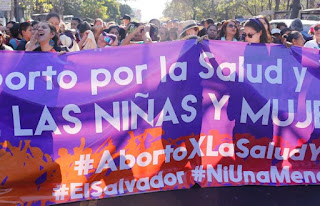 As abortion and reproductive rights issues roil the legal landscape in the US, El Salvador is a county where abortion rights are nonexistent.  El Salvador outlaws abortion in all situations and punishes not just abortion providers, but pregnant women, with some of the most draconian penalties in the world. As Human Rigts Watch reported:

Abortion is a crime in El Salvador, with no exceptions – even in cases of rape or incest, where the pregnancy endangers the pregnant woman’s life or health, or in cases of severe fetal impairment. Anyone who has an abortion, and the medical providers who perform or induce them, can face drastic prison sentences. Women have been convicted of murder after being accused of having had an abortion, sometimes with prison terms for up to 40 years. For some of these women, having a miscarriage or stillbirth was used as evidence to convict them.

A too common scenario involves a mother who suffers a late term miscarriage.  At the hospital, rather than treating the suffering and trauma of such an event, the mother is arrested and accused of aborting or killing her baby and carried off to jail. The mothers in these scenarios are almost always poor women living in rural or marginalized communities, who have had no prenatal care during the pregnancy, and understand little of what is happening with their bodies.
This video includes some of their testimonies:


That scenario played out again this week as yet another woman was condemned to 50 years in prison after an obstetric emergency.   Reuters describes:

A woman in El Salvador has been sentenced to 50 years in prison for aggravated homicide in a controversial case in which authorities argued she had killed her baby after giving birth, while her defenders said she had suffered a miscarriage.

From an article by the BBC titled Abortion laws: The women jailed for suffering miscarriages

It is not possible to verify that all the imprisonment cases were [miscarriages], but campaigners say that the current legislation results in the prosecution of women who did not seek abortions.

Women's rights organisations in El Salvador add that the issue disproportionally affects women who do not have the economic resources for private healthcare....

"Poor women in El Salvador are the ones who suffer the most with legislation which stigmatises them and also drives many to clandestine abortions," Morena Herrera, a well-known Salvadorian pro-choice activist, explains.  "We need to free those imprisoned women, but we also need to put an end to their persecution."

As its reach grows, so too does its political clout, with evangelical values and views increasingly present inside parliament.

Guillermo Gallegos, one of the vice presidents of the national assembly, is staunchly anti-abortion.

He insists decriminalisation would never pass the first legislative hurdle, "even where the mother's life is at risk".

"In any case where that little creature still has life," he tells me, "then I lean towards saving it over saving the mother".

I have decided, to dispel ANY DOUBT, NOT TO PROPOSE ANY KIND OF REFORM TO ANY ITEMS RELATED TO the RIGHT TO LIFE (from the moment of conception)

The comment came in response to language in a proposed new constitution developed by a working group headed by his vice president Felix Ulloa.

In October 2021, a commission of the Legislative Assembly rejected without significant discussion a proposal to decriminalize abortion in situations of a risk to the life of the mother, an unviable fetus, or in the case of rape.

El Salvador's strict prohibition on abortion goes into the opposite direction of a growing trend in Latin America to liberalize abortion laws.  Three of the four most populous countries in Latin America --  Argentina, Mexico and Colombia -- have decriminalized abortion in the past two years.  Chile may do so later this year.