The church, the sex predator, and a real estate project with powerful friends

June 14, 2022
Throughout El Salvador one will find churches of Luz del Mundo ("LDM" -- Light of the World). That faith group, which has its origins in Mexico has started to build a major religious campus and residential development in El Salvador. It is a church which has made a practice of being close to persons in power throughout the world. In El Salvador, that has meant being close to Nayib Bukele, the FMLN, Nuevas Ideas and other political figures. But the high leader of LDM has now been sentenced to 16 years in prison in the US for sexual assaults on minor girls, and whether LDM's plans in El Salvador will come to fruition is yet to be seen.

Luz Del Mundo is an unaffiliated Christian church, centered around the figure of a single man, the “Apostle of Jesus Christ”. The first Apostle in LDM was its founder Aarón Joaquín, and he was succeeded by his son Samuel Joaquín Flores, and then by grandson Naasón Joaquín García, the current Apostle. The headquarters of the church are in Guadalajara, Mexico, and it has churches in dozens of countries around the world. You can learn more about the church and its beliefs in this Wikipedia article.
As a 2021 article in El Pais explains:

La Luz del Mundo is often mistakenly described as an evangelical church. Rather, its theology revolves around the idea of restoring the true Christian faith and also around its leadership, which has an apostle to guide the congregation. The figure of the apostle is indisputable and his command is decreed by divine right: in practice, explains the anthropologist Elio Masferrer, this has made it easier for the Joaquíns to establish themselves as a sacred dynasty among their followers. “The apostle is a living God,” says Masferrer.

In El Salvador, LDM has congregations scattered throughout the country. Although membership statistics are difficult to ascertain, in 2009, the church was estimated to have 80,000 members in El Salvador.
The current Apostle of the LDM, Naasón Joaquín, and his church have managed to make close connections with people in power in El Salvador. While Nayib Bukele was mayor of San Salvador in 2015, he awarded Naasón Joaquín the honorific of “most distinguished son of San Salvador” in an event attended by legislative deputies from the FMLN (Bukele’s political party at the time and the party which then held the Salvadoran presidency).  After the death of Samuel Joaquín in 2014, El Salvador’s Legislative Assembly devoted a minute of silence to remember a “noble friend of El Salvador.”
Bukele awards "most distinguished son" honor
As the 2021 El Pais article documents, Naasón Joaquín and LDM also have developed close ties to politicians in Mexico, Honduras, Nicaragua, Guatemala and Costa Rica. Naasón Joaquín has appeared with political leaders in the US as well. In 2016, he appeared with a local mayor and state legislators in my home city of Milwaukee, Wisconsin. The Texas Senate passed a resolution commemorating the 50th birthday of the Apostle.

Univision reported that the family of Naasón Joaquín owns luxury properties throughout the US valued at $7.3 million, and the Apostle frequently arrives at his destinations on private jets.  According to Univision, the source of the Joaquín family’s wealth is unknown.
A little more than three years ago, LDM launched a multi million dollar real estate development project in El Salvador called Ciudad Luz Del Mundo.  Plans for the megaproject in the municipality of San Luis Talpa include: 11 residential zones with 1,106 housing lots, health clinics, schools, a university, and most importantly, a sanctuary with the capacity to house more than 100,000 people. The project is located on a site of approximately 250 acres, 5 kilometers to the north of the country’s Oscar Arnulfo Romero International Airport.
In 2019, then president-elect Bukele joined Naasón Joaquín at the groundbreaking and laying the first stone for the Ciudad Luz del Mundo development.
Bukele probably could not have anticipated what happened next.   From El Pais:

[T]he cult leader flew to El Salvador to meet with President Nayib Bukele and together lay the first stone of La Luz del Mundo City, an architectural project covering more than 100 hectares of El Salvador’s capital. That month of May, Naasón Joaquín appeared to be at the height of his influence in Mexico and Central America. Less than a month later, he was sleeping behind bars in the United States.

California state prosecutors arrested and accused Naasón Joaquín of coercing underage girls into performing sex acts by telling them that refusing would be going against God, the initial indictment said. The indictment, which included counts of sex-trafficking, child pronography, and sexual assaults on minors alleged that Joaquín forced the victims, who were members of the church, to sexually touch themselves and each other. One of his co-defendants allegedly took nude photographs of the victims and sent the pictures to the high church leader, according to the criminal complaint.

Despite the arrest of the church's high leader in June 2019, development of Ciudad Luz del Mundo continued.  According to the environmental journalism site Mala Yerba, El Salvador’s environment ministry issued a finding that construction work was proceeding without the necessary environmental permits.  But construction continued as lawyers for the church then proceeded to receive a series of extensions of time for which to provide the required documentation. 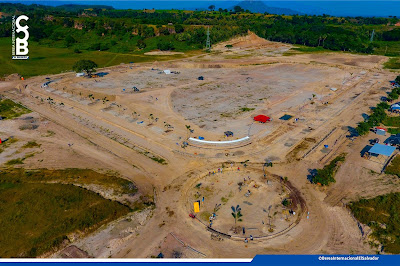 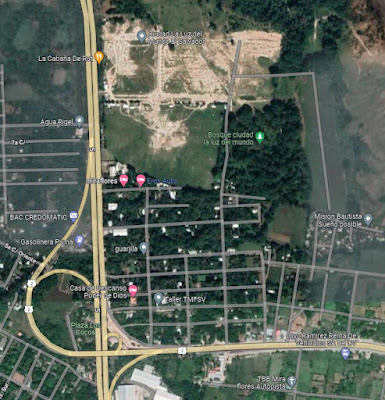 LDM has been using its political connections in El Salvador to keep the megaproject moving despite the lack of environmental authorizations.  According to Mala Yerba, Caleb Navarro, a legislative deputy from Bukele's Nuevas Ideas party is a member of Luz Del Mundo.  Navarro met with Bukele on April 5, 2022, despite it being the first week of the emergency State of Exception in El Salvador, and thanked the president for his "great support and commitment" to the project.

Notably, Navarro's tweets about his meeting with Bukele never metioned the name of the church or the name of the Apostle who was about to plead guilty to child sexual abuse in Los Angeles.

Ten days later in April 2022, another event took place in Ciudad Luz Del Mundo during the State of Exception and with the presence of Nuevas Ideas deputies. This time both Caleb Navarro and Christian Guevara, chief of the Nuevas Ideas delegation within the Legislative Assembly attended:

On June 3, 2022, shortly before trial, Naasón Joaquín pled guilty in a Los Angeles court, to sexually assaulting three minors. He was sentenced to 16 years in prison and will be required to register for life as a sex offender.  The global LDM church, however, remains committed to its leader and blames the prosecutors and court for his jail sentence.

The source of all the money going into this development is unclear, but most accounts indicate that the primary source of income for the church is the alms-giving by the faithful. Whether that income stream has been threatened by the revelations concerning Naasón Joaquín, who has now admitted to child sexual abuse, is unknown.

What is clear, however, is that LDM continues to have powerful friends in El Salvador including Nayib Bukele and members of his political party.   And powerful friends like that mean that environmental permitting rules are unlikely to change the course of this project.

We'll conclude with a video summary of the Ciudad Luz Del Mundo development from the environmental journalism site Mala Yerba: