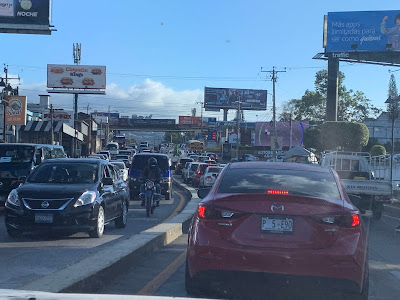 You can spend a lot of time in El Salvador's cities in traffic, particularly in San Salvador.  Growing number of vehicles on the roads in crowded cities produce rush hours which can seem to last throughout the day and challenge your ability to arrive on time.

On the one hand, the growth in the number of vehicles is a positive sign of a growing number of Salvadoran households able to afford car ownership.   On the other hand, the country has to struggle with congestion and the need to adapt its street and highway system to the ever increasing vehicle total.

Here is a set of statistics about traffic in El Salvador:

1.5 million.  That's the number of vehicles  registered to drive on El Salvador's roads according to the vice minister of Transportation.   That total includes slightly more than 1 million cars and 451 thousand motorcycles.

10 thousand.  The number of additional vehicles which arrive in the country each month, the majority of them being used vehicles shipped from the US.

$25 million.   The value of the time lost with those 37 million hours according to the IADB study.

8.   The number of real time traffic cameras you can watch at this site:  http://eltraficosv.com/ if you want to see current traffic conditions in the greater San Salvador area.

The government is taking steps to try and get ahead of ever increasing congestion delays.  There are plans to implement steps such as smart traffic lights at intersections, photo based traffic tickets, building additional bypasses and multi-level traffic circles.  There does not seem to be any plan for mass transit systems to reduce automobile use.

These seem to be good steps, but it is difficult to say whether they can keep ahead of the every-growing number of Salvadoran cars and drivers.

These are my personal pet peeves for things which aggravate traffic congestion in El Salvador: