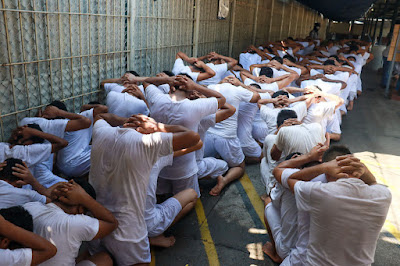 This post originally appeared May 16 on the website of InsightCrime with the title Will Soaring Arrests in El Salvador Overwhelm its Prisons?
********
As part of his sweeping gang crackdown, El Salvador President Nayib Bukele has overseen the mass imprisonment of tens of thousands of people, potentially jeopardizing recent efforts to mitigate overcrowding and gang control in the country’s jails.

El Salvador authorities claim to have made over 30,000 arrests since roundups began March 27, the day El Salvador’s legislature approved emergency powers that loosened rules on arrests and curtailed civil liberties. The state of emergency came after a three-day killing spree in March that left 87 people dead, including 62 in a single day. Congress extended the emergency powers for another 30 days on April 24.

The government has claimed that nearly all of the people detained under the emergency decree have been gang members. But reports of arbitrary detentions are widespread, and police union officials have alleged that officers are facing pressure to meet arrest quotas and provide false statements against detainees. Human rights monitors and local press have also documented multiple deaths of inmates in custody.

As of April 29, more than 10,000 people had been charged for alleged links to gangs and placed in pre-trial detention, according to El Salvador Attorney General Rodolfo Delgado. Few of the people arrested have been released.

To cope with the sudden influx of prisoners, President Bukele announced plans for a new maximum-security prison housing 20,000 gang members. The country’s legislative assembly approved a law for building the new jails on April 19, though the time frame for construction is unclear.

The government has also used other legal tools to keep those arrested behind bars. The legislature modified the penal code to eliminate alternatives to detention for arrested gang members. A law passed on March 30 increased maximum jail sentences for gang membership to 45 years.

Prison overcrowding is not new in El Salvador. Successive governments have grappled with burgeoning jail populations, a problem stemming in part from limited state resources and an overreliance on repressive security policies. The country’s prisons operated at over double capacity for much of the 2010s, according to figures from El Salvador’s prison authority.

The mass arrests are likely to strain El Salvador’s overstretched prisons and affect gang dynamics, though exactly how is difficult to discern from past crackdowns.

“All the possible scenarios are worrying,” said Luis Enrique Amaya, a Salvadoran researcher and consultant specializing in public security.

“If all of [the detainees] enter the prison system and are prosecuted, or end up convicted, it would be an unprecedented increase in the prison population for such a short space of time,” he told InSight Crime.

The prison system already faced overcrowding prior to the sweeping arrests.

The recent surge in inmates means that the prison population is likely around 70,000, over double the penitentiary system's estimated capacity.

InSight Crime tried to confirm these figures with El Salvador’s prison authority but did not receive a response prior to publication.

Severe prison overcrowding in the late 2000s and the mid-2010s proved a catalyst for gang consolidation and growth in El Salvador, with gang leaders from the MS13 and Barrio 18 transforming the prisons into operational centers and bases of recruitment.

El Salvador has since upgraded its prison infrastructure. New jails have opened and security measures tightened in an attempt to claw back control from the gangs.

The prisons no longer appear to be the lawless gang incubators they once were, gang analysts told InSight Crime.

“I don’t think the government’s strategy is to simply to place prisoners in the same spaces [as before],” Amaya said, pointing to the recently announced plans to construct new jails.

Still, the spike in inmates is bound to strain state resources over time, according to Roberto Valencia, a Salvadoran journalist who has spent years documenting the gangs.

“Managing 60,000, 70,000 or 100,000 prisoners requires investing public funds – for food, surveillance, care, and maintenance – that I doubt an impoverished country can cope with in the medium- to long-term,” Valencia told InSight Crime.

The sudden mass arrests may also influence gang operations – for better or worse. Amaya told InSight Crime that the arrests could temporarily disrupt gang logistics, including the collection of extortion revenues, though some press reports suggest that extortion has continued unabated.

“The events in the prisons undoubtedly affect what’s happening on the street, but they don’t define it completely,” Amaya said, adding that the gangs have repeatedly shown their ability to overcome state pressure by tweaking their operations.

“The gangs have always found a way of adapting and surviving,” he said.
This post originally appeared May 16 on the website of InsightCrime with the title Will Soaring Arrests in El Salvador Overwhelm its Prisons?
Gangs Human Rights Prisons State of Exception