Bukele continues to receive thumbs up from Salvadoran public 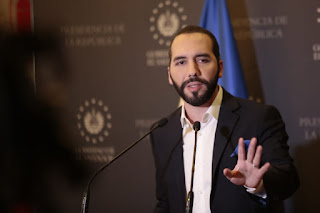 Two Salvadoran universities released poll results May 25 providing the opinions of the Salvadoran public regarding the current State of Exception and other aspects of the government of president Nayib Bukele.   Despite the warnings of human rights advocates and independent journalists regarding arbitrary detentions, the abuse of human rights, and the decline of the rule of law in the country, it would be fair to say that the Salvadoran public is quite satisfied with the current performance of the government.

The University Institute of Public Opinion (IUDOP) of the UCA conducted a poll to learn public sentiment surrounding the State of Exception and the accompanying roundup of more than 34,000 suspected gang members and collaborators.  The IUDOP poll results show the Salvadoran public to be broadly supportive of those measures.  According to the poll:

Going somewhat against the tendency of these findings, 48.3% of those polled disagreed with the authorities making arrests without a judicial order, although that is a central feature of the State of Exception.  And 1 out of 6 person polled indicated they knew someone who appeared to have been arbitrarily detained with no apparent links to gangs.

The other set of polling numbers came from Francisco Gavidia University ("UFG") and focused on overall satisfaction with the government, as Bukele approaches his third anniversary as president on June 1.    Bukele's popularity continues strong three years into his administration: