One week under State of Exception gang crackdown 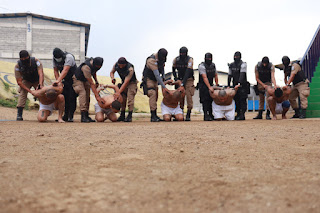 One week has passed since the bloody weekend which saw almost 80 Salvadorans murdered across the country and the government of El Salvador responding with a "State of Exception" and a massive crackdown in gang areas.   Here is a summary of some of the major themes of the week.

Mass arrests of alleged gang members under the State of Exception

Local Salvadoran media also shared numerous stories of family members seeking any information about where those arrested had been conveyed and what their status was.  Similarly there were stories of families claiming that there son or daughter who was arrested had never been involved with the gangs but had simply been on the street and suddenly detained.

Under the State of Exception, anyone arrested can be held for 15 days before seeing a judge.  Arrested individuals are being sent to maximum security prisons where they are held under harsh conditions.

Celebration of harsh measures for gang members in the prisons

The president and his director of prisons pushed the message that they were imposing harsh members on gang members inside prisons as punishment for the murder spree of last weekend:

President @nayibbukele in the Security and Maximum Security prisons we are limiting food, the gang members are going to suffer from the pain that their "homeboys" cause outside. They will learn to respect the life of each person. NOT A SINGLE step back in the #WarAgainstGangs

Since Sunday, food is rationed and the 16,000 imprisoned gang members have not left their cells, nor have they seen the sun. In these days we have arrested 3,000 more (and we continue). So there will be less and less space and we will have to ration even more.

The government published photos from the prisons showing mattresses being removed from crowded cells with prisoners forced to lay on concrete floors, or prisoners stripped to shorts chicken-walking before heavily armed and masked guards in prison yards.

The national crisis proclaimed by Bukele also provided justification for a hardening of laws regarding gang membership in the country. Bukele asked the Legislative Assembly to come into session to pass laws enhancing the criminal penalties faced by anyone who was a gang member.  The Assembly, controlled by Bukele's political party, came into session a few hours later and immediately passed the measures sought by Bukele.

Intimidation of the judicial branch

When the State of Exception was announced, Nayib Bukele tweeted that he would be paying attention to which judges were too lenient with gang members.  In the last few days, it became clear what that meant.  Judge Godofredo Salazar  had overseen a trial of 42 members of the Barrio 18 gang, and at the end of the trial dismissed the charges.   He ruled that the government’s case was based on the testimony of a single cooperating gang witness who had testified inconsistently and lacked credibility.   Bukele tweeted that the Supreme Judicial Court should investigate Salazar for links with gangs.  A few hours later the Court transferred the judge, who had long overseen complicated gang trials in San Salvador, to a rural outpost in the country.

Is the spike in murders over?

Just as quickly as homicides surged to record numbers last weekend, the daily number of violent deaths has immediately returned to low single digits.   Bukele is quick to take credit.

Investigative reporting by the website InsightCrime and La Prensa Grafica revealed documents this week showing that at least 4 of the top MS-13 leaders which the US seeks to extradite for prosecution in federal court have been outside prison walls.   The investigation revealed internal prison documents showing dates on which those members of MS-13's top leadership known as the "ranfla" were listed as at liberty.  An eyewitness also reported seeing one of these top leaders free on the streets of El Salvador.   The Salvadoran government has refused to tell the investigative reporters is whether those gang leaders had ever been returned to prison.

The US sought extradition of the gang leaders in the first half of 2021 after they were charged in a multiple count indictment in US district court.  So far the Salvadoran government has not been willing to extradite the gang leaders despite the fact that they could face long prison terms in the US, away from the gangs they control back in El Salvador.  The US Embassy has expressed its concern about at least one of these gang leaders, "Crook," no longer being in custody.

The failure to honor extradition requests and the possible release of top MS-13 leaders stand in contradiction to all the other rhetoric of the Bukele administration regarding its #WarAgainstGangs.

The State of Exception with its suspension of constitutional protections, its roundups of thousands of persons from marginalized communities, and the inhumane treatment of incarcerated persons has prompted warnings from international human rights organizations.
In El Salvador: Broad ‘State of Emergency’ Risks Abuse:  Basic Rights Suspended after Spike in Homicides, Human Rights Watch wrote:

States of exception serve the primary purpose of, in emergency situations, the maintenance and preservation of constitutional order. They should not, instead, undermine it or permit security forces and other agents and officials of the State to act arbitrarily and at their discretion.
The government’s actions before, during, and after the wave of violence are a high level threat against human rights, citizen security, and the rule of law in El Salvador.

The InterAmerican Commission on Human Rights posted this tweet: 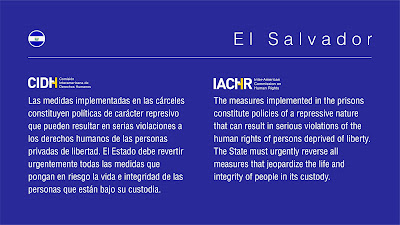 Bukele has responded to the international criticism with a daily series of tweets accusing human rights groups of being on the side of the gangs against the suffering of ordinary Salvadorans.

On March 28 the Salvadoran president tweeted:

TO THE INTERNATIONAL COMMUNITY: We have 70,000 gang members still on the streets. Come get them, take them to your countries, get them out of this "dictatorial and authoritarian persecution." You can help these little angels, do not allow us to continue "violating their rights".

The same day he wrote:

These hustlers from the international NGOs claim to watch over human rights, but they are not interested in the victims, they only defend murderers, as if they enjoyed seeing the bloodbaths. Tell me how many thousands of gang members you're going to take with you so they can treat them like royalty there.

Do you know how many countries have decided to help us in the war against gangs?

Do not come later and try to tell us what we should have done or not do, when at the moment that we could have needed your help, you left us alone.

The [InterAmerican Commission on Human Rights] IACHR has already come out to defend the gang members. But not a single word about the victims of these killers. It is clear which side they are on. Countries should consider withdrawing from these international organizations that only seek to keep our people suffering.

SALVADORANS REMEMBER: When the gang members murdered dozens of innocent people, the IACHR did not say A SINGLE WORD.  But it did not take them a day to condemn when we got tougher with them in the prisons. Always REMEMBER what interests they represent.

For these NGOs calling themselves “defenders of human rights”, the rule of law means that the 42 gang members should have gone free to murder Salvadorans. Their agenda is clear. They don't hide it anymore. They want to see our people bleed to death, that is their business.

Events in El Salvador have generated a spate of coverage of the past week's events in the international press.   The war on gangs has pushed out Bitcoin as the dominant story line concerning El Salvador:

Charly Boqueron said…
the president of el salvador is corrupt and that makes it very difficult for the population to know and understand exactly what's happening and the long term repercussions of those current events. there are many important questions that do not have straight, direct answers. like, for example, how are instructions from the jails delivered to the gangs on the outside to carry out the hike in homicide raids? does that mean the communications have not been totally obstructed like the government has claimed in the last three years? weren't gang members mixed among the different rivaling groups since the last time the gangs raised the homicides; was that policy reverted? is there a connection between the gangs decision to raise the homicides and the fact they've lost extorsion money due to the governments expropriation of bus lines?

it is also important to notice that when the first truce between the gangs and the government broke the gangs attacked the police and military personnel directly and deliberately. this time they've attacked the civilian population instead. that signals, in my opinion, that the gangs are not breaking from the pact they have with the government but instead are making a point on a particular but minor issue they are not satisfied with. the day they begin attacking law enforcement personnel like seven years ago that will signal the deal with the current government has fallen apart completely. i wonder if the u.s embassy in san salvador has any information regarding bukele's truce with the gangs that they may make public ???
8:37 PM