April 08, 2022
One central feature of the presidency of Nayib Bukele is an attempt to set and control the narrative regarding the performance of his government.  This has taken the form of limiting transparency and access to public information, and it has also taken the form of attempting to stifle independent voices in the press who present information which puts the government in a bad light.  In other words, Bukele and his allies have sought to "chill" the exercise of freedom of the press in the country.
The most recent example is a newly passed law which threatens prison sentences of up to 15 years for persons disseminating messages emanating from the gangs. One provision of the law criminalizes gang tagging walls and buildings with gang symbols.   But journalists are pointing to a second section in the law which places a muzzle on reporting on the gangs:

The new measure states that any “radio, television, written or digital media” that “reproduce or transmit messages or communications originating from said criminal groups” could be subject to 10 to 15 years in prison.
Representative Guillermo Gallegos said during the plenary session to discuss the change, “What we are restricting is terrorist groups that may be advertising themselves — through some bad Salvadorans they advertise in the media.”
The Salvadoran Journalists’ Association called the new measures “gag order reforms” that represent “a clear attempt to censor news outlets” covering gangs.

In essence, the law threatens criminal penalties for any reporting which uses as a source someone connected with a gang, even if that reporting is completely truthful and exposes wrongdoing by the government.  If such a law had been on the books in the past, perhaps we might not have been the beneficiaries of such important works as The Hollywood Kid, Carta Desde Zacatraz, A History of Violence, and MS-13: The Making of America's Most Notorious Gang-- all of which offer significant, unflinching looks into the world of the gangs.  Such reporting has been important to understanding Salvadoran gang culture, and only with understanding the culture can strategies be developed to address the root causes of gang violence.
If such a law had been on the books in the past, we might not have had the investigative disclosures which showed that the government of Mauricio Funes negotiated with gangs to reduce homicides in return for prison benefits, which showed politicians of the FMLN and ARENA offering cash in return for votes in elections, which showed Nayib Bukele negotiating with gangs to allow the construction of the new Cuscatlan Market in San Salvador and to allow him to campaign in gang neighborhoods.  We would not have had the interview with an MS-13 leader in the month Bukele took office stating that the gang had "placed its faith in God and Bukele"

Another example of chilling effects on the exercise of the free press was the recent report that Pegasus spy software had been found on the phones of more than 20 journalists at El Faro, as well as phones belonging to individuals at five other periodicals and three civil society groups.  The Israeli defense company which created the software asserts Pegasus is only sold to government entities.  The "chilling effect" here is obvious.   Sources of information about government corruption and misdeeds are much less likely to talk to journalists if they know that same government has the ability and practice of infecting journalist phones to spy on their communications.
After the Pegasus surveillance was disclosed, the Bukele government enacted measures which seem to expressly authorize this type of snooping.   The laws involve "digital agents" and computer crimes.   Human Rights Watch described their potential chilling effects:

Under the reform, digital agents operating under police control would conduct “necessary undercover digital operations” to investigate crimes under El Salvador’s Special Law Against Computer Crimes and other “special laws.” The agents would operate with the Attorney General Office’s approval and without a court order. The reform is vague about the scope of the agents’ operations, raising questions about the extent to which they will be allowed to intrude on privacy rights. It also does not specify or limit the circumstances in which agents might be deployed, and establishes no independent oversight to audit cases, raising transparency and accountability concerns.
These provisions are particularly troubling against the background of other amendments the assembly made to the Special Law Against Computer Crimes in December, which define offenses in broad and vague terms. For example, one of the amendments would criminalize using technology to obtain or distribute “confidential” information, a provision that could easily be misused against journalists, advocacy groups, or whistleblowers.

There is a further chilling effect when government leaders signal to their followers on social media that journalists should be the subject of online attacks and abuse.  During the State of Exception, politicians from Nuevas Ideas and their allies have been implying that journalists are in league with the gangs if they report any criticisms from a human rights perspective.  The most recent victim of this abuse is Byan Avelar, a well-respected reporter who writes for RevistaFactum, the New York Times, and Vice World News.  He is being subjected to merciless online attacks claiming he is an ally of the gangs for his reporting in the New York Times, the Guardian and elsewhere regarding the State of Exception.
A government does not need to lock up journalists for something they published in order to accomplish its aims of controlling the narrative.  Chilling measures such as the ones we see in El Salvador can produce self censorship where journalists and their editors hold back from publishing stories because of the fear of prosecution in a legal system controlled by that same government.   Chilling measures like these make source less likely to divulge acts of corruption within the government.  Chilling measures like these damage citizen control over their own democracy.
In response to passage of the recent Gag Law, El Faro took the step of going dark on its website for all of April 7 in protest.  This was the message visitors to the El Faro website saw yesterday:

No to Censorship
“For many years, readers have turned to El Faro’s pages for clear-eyed and critical journalism committed to understanding the social and political phenomena that determine the lives of millions of Salvadorans and Central Americans.
“That task includes explaining the gangs: their origins, their radical expansion in northern Central America, their subjugation of large swaths of the population, and their back-door bargaining with politicians and governments for more than a decade. Without an independent press, the public would have never learned of these pacts. This ongoing work is now a crime punishable with up to 15 years of prison in El Salvador.
“The reforms to the Penal Code approved this week by the Bukele-controlled Legislative Assembly are a gag order on the press and freedom of expression, but above all else, an assault on the public’s right to be informed. What should citizens know about El Salvador’s gangs? Nothing, according to the government.
“In a democracy, those in power do not decide what is published or not. But this new law, passed by the legislature at the command of President Nayib Bukele, comes when democratic order has already been dismantled in El Salvador and the regime goes to every length to hide its corruption and its negotiations with criminal groups. That is why today, in objection to this gag order, we will keep closed our home page. This country paid too high a price for its freedoms. We cannot allow them to be snatched away by a regime bent on leaving its citizens in darkness.
“Tomorrow you’ll once more find in our pages what we have done for years and will continue to do: journalism. Today, we protest.” 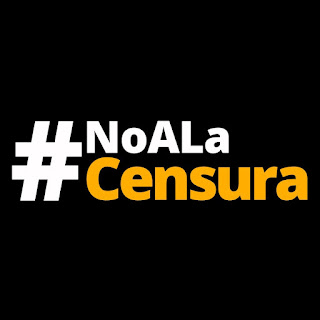 Charly Boqueron said…
the president of el salvador is a corrupt dictator and lost the moral highground to lead the nation a long time ago, about seven or eight months since taking up office basically.
the question now is, how do we (the opposition who does not abide or subscribe to the regime's corrupt governing) being a small minority group resist and fight back this corrupt government? how can journalists continue to do their jobs and inform of the corruption by government officials without the harsh consequences imposed by the regime as punishment? how can individuals without voice and power resist and even fightback? why the u.s isn't actualizing the engel list to include nayib bukele himself and his clan of siblings and family members and directly label them as corrupt because they are? if bukele has negotiated with gangs and organized crime and paid them money, why can't the u.s capture him and extradite him to serve jail time in the u.s.a ??? in el salvador right now, for those who oppose bukele's corrupt government, it feels like a small band of jedi warriors resisting the evil intergalactic empire run by the sith. and the way things are going it will be very difficult to overthrow the tyrant peacefully and we should start coming to terms with the fact that the SOB will remain in power for the rest of his life, like a dictator vitalius.
7:33 PM