Bukele's Bitcoin predictions have largely missed the mark so far 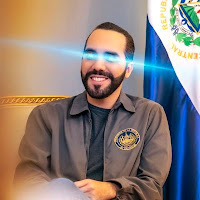 Nayib Bukele is an unapologetic proponent of Bitcoin, who has made the crypto-currency legal tender in El Salvador, proposes to build a tax haven city named for Bitcoin, and has invested more than $85 million of the country's tax dollars in Bitcoin purchases.  He promotes Bitcoin in English from his Twitter account, predicting a rosy crypto-future for El Salvador.  Today we look at how some of Bukele's predictions are faring.
Adoption of Bitcoin by Salvadorans -- not so much.
Bitcoin became legal tender in El Salvador on September 6, 2021 and in December, the Salvadoran president tweeted: 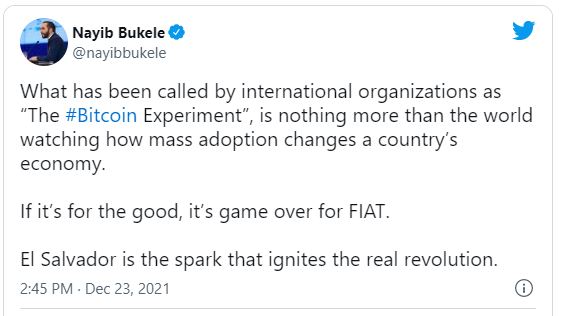 The "mass adoption" of Bitcoin referred to by Bukele in this tweet has not happened in El Salvador despite the president's immense popularity.  Outside of crypto-tourists who arrive in search of Bitcoin Beach and someone who will sell them coffee and a pupusa paid for with Bitcoin, El Salvador remains overwhelmingly a country with a cash economy operating with US dollars.

There is an issue, however: Outside of the beach towns filled with crypto-curious foreigners, no one wants to use it.

An academic working paper from the National Bureau of Economic Research titled Are Cryptocurrencies Currencies? Bitcoin as Legal Tender in El Salvador studied the first months of El Salvador's adoption of Bitcoin as legal tender and the public's use of the Chivo wallet app.   Using economic data and polling from CID-Gallup during February 2022, the paper reveals that Bitcoin has made little progress as a currency within El Salvador despite the big push by the government at the time of its launch:

While most citizens in El Salvador have a cell phone with internet, less than 60% of them downloaded Chivo Wallet, and 20% continued to use the app after spending their $30 sign-up bonus. Further, 5% of citizens have paid taxes with bitcoin, and despite its legal tender status, only 20% of businesses —mostly large ones—accept bitcoin and 11.4% report having positive sales in bitcoin. In the first quarter of 2022, we find almost no new adopters and the share of remittances in bitcoin is at its lowest point since Chivo Wallet’s launch.

One of the major drivers for the use of Bitcoin and the Chivo wallet was supposed to be a reduction in the cost of family remittances through money transfers sent from abroad.   However, in January and February this year, a scant 1.7% of remittances were sent using digital wallets according to data from El Salvador's Central Reserve Bank.

A reporter from Bloomberg tried out El Salvador's Bitcoin economy and wrote about the experience in The Infuriating Reality of Traveling with Bitcoin in the World's Crypto Capital:

The final tally looks grim for crypto fans. Only 10 of almost 50 businesses had taken Bitcoin, amounting to $485 out of $1,700 I’ve spent. And only four crypto transactions—at the pool hall, the peanut vendor, a Starbucks, and a Caterpillar-brand T-shirt store—had been entirely seamless. My experience isn’t a fluke. In a recent Chamber of Commerce survey of 337 businesses, only 14% said they’d transacted in Bitcoin since September.

So far, Bitcoin shows no sign of creating a "real revolution" in El Salvador's cash economy.

No profits, only losses, from Bitcoin investments so far

Bukele told the Salvadoran public that a pet hospital -- Chivo Pets -- was being built with "profits" from the country's purchases of Bitcoin.  In the following tweets from October 2021, he clarified that El Salvador was actually not selling Bitcoin and realizing its profits, but was using US dollars from the trust which is supposed to back up the Chivo wallet app and the free conversion between dollars and Bitcoin.

Bukele was still claiming the Chivo Pets Hospital was built with Bitcoin profits when the facility opened on February 24, 2022, when Bitcoin had fallen below $37,000 USD and El Salvador had unrealized losses of more than $17 million on its Bitcoin investments. (These were the investments that Bukele jokingly claims he makes on his smartphone in the bathroom while naked).  Those unrealized losses remain today, with the price of Bitcoin roughly 20% below the average value of Bukele's prior Bitcoin purchases: 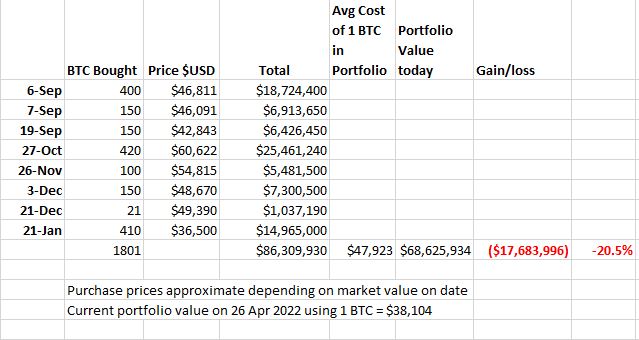 Note that if Bukele were doing what he indicated in his October 2021 tweets above, he should be putting $17 million back into the trust to make its current value the same as when the Salvadoran government established it with taxpayer money, and should restore the dollars withdrawn from the trust for construction of the Chivo Pets hospital.  There is no indication that this is happening (but the government also provides no public accounting of the flow of money into and out of that trust).

Bukele had some other predictions on New Year's Day 2022: 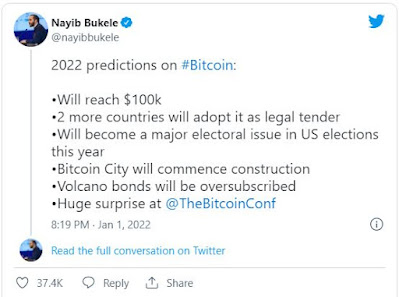 Bukele's prediction of a $100,000 price for Bitcoin is still far from being reached at the end of April.
Bukele's prediction of a $1 billion "Volcano bonds" offering being oversubscribed came at a time when  his finance minister was telling the world that these Bitcoin bonds would be ready for sale in February or March.  As of today, sale of those bonds appears to be indefinitely on hold.  Former Salvadoran Minister of Finance Carlos Acevedo opined that there is simply not enough interest to sell the bonds today.  And with no bond sale, there is no start of construction for the heavily promoted Bitcoin City.
Bukele's prediction of a "huge surprise" at the Miami Bitcoin Conference 2022 did come true, but probably not the way Bukele was thinking of.   The surprise came when he canceled his headline appearance at the 11th hour as the State of Exception and a war on alleged gang members took off.
In fact, some observers have noted that currently Bukele is not tweeting about Bitcoin nearly as often as in the past:

On Nayib Bukele's Twitter — followed by 3.8 million people — Bitcoin memes and laser eyes have been replaced by photographs of handcuffed gang members.

Others are noting the contradictions of a president who promotes a libertarian version of freedom embodied in Bitcoin and crypto-currency, while at the same time engaging in an authoritarian crackdown on his critics.

Some call him the visionary leader Central America needs. Others consider him a thug who violates human rights at every turn. Either way, he’s just getting started, and wait till you see the crypto mining operation he plans to power with a volcano.

Yet despite this record of predictions which are far from coming true, the crowd of Bitcoin enthusiasts who believe in Bukele's vision, continue to head towards the empty corner of El Salvador where Bitcoin City might be built:

If built, Bitcoin City would qualify as the perfect utopia for crypto adopters, who are big on creating crypto-friendly jurisdictions with flexible regulation, little government oversight, and minimal taxes....[W]ealthy investors from Europe and El Salvador have already started making offers to locals in areas surrounding Conchagua.

Peter Ippolito said…
Hey Tim, great article as always. In our El Sal business, we spent a ton of time trying to figure out how to accept bitcoin, how to do the accounting, etc. Then, one person wanted to use bitcoin right after the giveaway in the fall. No one else has even brought it up...and we sell to a couple hundred people a day at least. The other businesses we talk to have had more or less the same experience.
3:19 PM