Bukele gang crackdown is bigger version of past failed policies 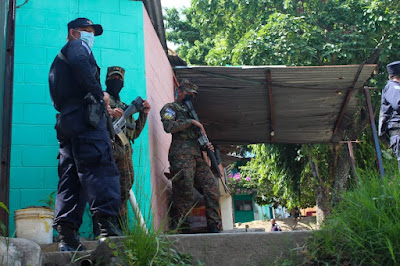 Originally published with the title El Salvador Shifts Mano Dura Security Policies into Overdrive
on April 12, 2022 at the website of InsightCrime.

With a near unprecedented wave of arrests, the El Salvador government is doubling down and expanding on heavy-handed security policies, known as mano dura, that have consistently failed to yield long-term results.

On April 12, El Salvador President Nayib Bukele claimed his government had arrested more than 10,000 gang members in 17 days as part of a nationwide crackdown on street gangs, following an unprecedented killing spree linked to the MS13 and Barrio 18 gangs in late March.

The mass detentions come after the El Salvador legislative assembly enacted a month-long state of exception on March 27 in response to the killings, loosening rules on making arrests. Under the measures, the country's security forces have reportedly encircled neighborhoods, conducted house-by-house searches and mounted military roadblocks in an attempt to round up suspected gang members. Meanwhile, government social media accounts have posted videos of authorities roughhousing detainees, as well as clips of police appearing to torture gang members that were later taken down.

Bukele has shrugged off cries of human rights abuses and insisted his government has almost exclusively arrested gang members during the crackdown, despite media reports citing evidence that authorities have also detained ordinary citizens and the president admitting that one percent of those arrested may have been falsely detained.

The El Salvador government has also sought new legal tools to quell the gangs. The country’s legislative assembly passed new legislation on March 30 increasing the maximum jail sentence for gang membership from nine to 45 years, while also allowing authorities to jail children as young as 12-years-old.

Legislators also recently passed a separate law, establishing sentences of up to 15 years in prison for media outlets disseminating gang-related messages or reporting on the gangs’ territorial control in El Salvador. The move, heavily criticized by journalists, human rights organizations, and US officials, effectively outlaws the type of reporting that has exposed an alleged pact between the Bukele administration and the country’s main gangs, with the latter purportedly reducing homicides in exchange for prison benefits for jailed leaders.

Bukele has repeatedly denied the existence of such a pact, instead touting his government’s hardline security policies for a steep reduction in homicides during his time in office – one of his administration’s most important accomplishments.

The decline in homicides has contributed to Bukele's widespread popularity in El Salvador, a country where repressive anti-gang measures typically receive broad support from a local population weary of gang violence and extortion.

Though mano dura security policies have been a constant feature of El Salvador security policy since the early 2000s, the recent measures adopted by the Bukele administration have taken these tactics to another level.

The thousands of incarcerations reported by the government in just over two weeks have not only outpaced previous crackdowns, they have also required stricter legal measures that curtail constitutional rights for ordinary Salvadorans. The accompanying legislation – increasing jail time for gang members, limiting press freedoms and threatening children's rights – also marks a notable increase in the scope of iron fist measures.

Meanwhile, President Bukele has also stepped up anti-gang rhetoric, comparing gang symbols to Nazi imagery in an effort to justify the legislation prohibiting the publication of gang content. In a recent speech, the president also threatened to deprive imprisoned gang members of food.

Previous iron fist campaigns suggest the repressive security measures will do little to address the underlying causes of gang violence in El Salvador, rooted in poverty and social insecurity. The March killing spree was a sign the gangs can still wreak havoc with murders on demand, and there is little evidence to suggest hardline policies have succeeded in dislodging gangs from areas where their territorial control is so comprehensive that it allows them to usurp functions of the state.

Likewise, efforts to jail gang members en masse have previously backfired, with the gangs historically using prisons as centers for recruitment and headquaters coordinating illicit activities like extortion. Adding thousands of new inmates to the country’s already overcrowded jails is unlikely to improve the situation.
Originally published with the title El Salvador Shifts Mano Dura Security Policies into Overdrive
on April 12, 2022 at the website of InsightCrime.
Gangs Nayib Bukele

Unknown said…
But it's actually working this time...
2:53 PM