The airport in the east

Since beginning his campaign to be president of El Salvador, one of the signature proposals of Nayib Bukele has been a plan to build an international airport in the eastern department of La Union.   Here he is in the video of his campaign presentation of Plan Cuscatlan in the weeks before the 2019 election.

The website of El Salvador's Port Authority ("CEPA" for its initials in Spanish) describes the objective of the airport project:

The Government of El Salvador seeks to convert the eastern zone into a pole of economic development, encourage the growing demand for passengers abroad, develop international tourism and activate the Port of La Unión.

The proposed location is located near the communities of Loma Largo and Condadillo in the municipality of Conchagua in the Department of La Union: 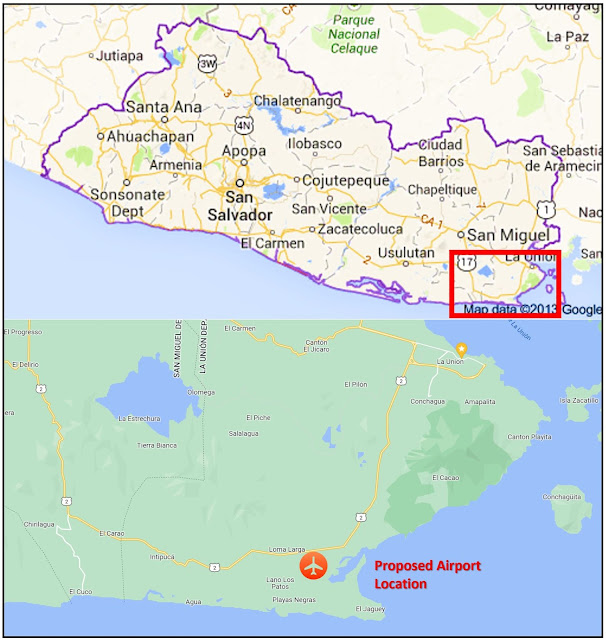 The location is approximately 93 miles (150km) from the country's existing international airport.  The nearest city is San Miguel, 30 miles away.

The Airport of the Pacific project is still in the feasibility study phase.  A year long feasibility study performed by two international consulting firms was delivered to the government in February 2022.    A recent article in El Mundo reported that the firms are now being asked to expand the study to include studies of land acquisition and resettlement of current residents, along with rainwater, potable water and electricity issues.

Critics of the project are pointing to a study by the environment ministry MARN which revealed several serious environmental threats posed by the proposed location. This site is adjacent to and potentially encroaching on environmentally important mangrove wetlands. Three waterways presently cross the area of the proposed airport and enter into the protected mangrove swamps. The land is susceptible to flooding. Locating the airport at this site would also interrupt important travel corridors of various animal species.

The proposed site also crosses an aquifer which supplies local communities and could adversely impact the recharging and water levels in those aquifers.

A new website dedicated to environmental reporting, MaloYerba, reports that on September 29, the MARN listed the project as "not environmentally feasible"   The next day, CEPA officials filed a request for reconsideration, and less than 24 hours later the status of the project had changed to "high impact," which would require an environmental impact statement be prepared before approval to proceed.

The MaloYerba article also describes important questions about the viability of the project:

The Airport of the Pacific poses more socio-environmental impacts than profits, explains biologist Néstor Herrera, who has studied the eastern zone [of El Salvador]. The biodiversity and ecosystems expert says that if construction continues in Loma Larga, "what will happen is that they will have to divert the rivers" and that will affect the mangrove swamp, which will stop receiving fresh water, vital for the health of the salt water forests, he indicates.

For his part, the economist Luis Ernesto Vargas, who is studying a doctorate in economics, natural resources and sustainable development in Mexico, points out that the Pacific Airport is designed along the lines of vertical megaprojects: “built from desktops and not from the territories,” he criticizes. For Vargas, thinking that the airport will generate some kind of development in these municipalities in conditions of poverty "is more of a hope than a realistic situation."

The Permanent Roundtable for Mitigation of Risks in El Salvador, a civil society group, called on the government to take seriously the environmental impacts described by MARN and to engage in an open and serious dialogue with the affected communities. Other environmental groups have also called for the proposed airport site to be rejected.

Despite the concerns being raised, MaloYerba, reports that government officials have already been on the ground identifying the steps needed to acquire property and relocate what is currently on the site. The process of acquiring the land for the airport has been facilitated by a new eminent domain law passed last November by the Nuevas Ideas-controlled Legislative Assembly that eases the process for the government to take privately owned land for public purposes.

It is certainly no coincidence that this area is also the location of Bukele's proposed futuristic "Bitcoin City" which is supposed to be funded with the issuance of so-called Bitcoin Volcano Bonds to raise $1 billion, $500 million of which is dedicated to building infrastructure for a city and for Bitcoin mining. 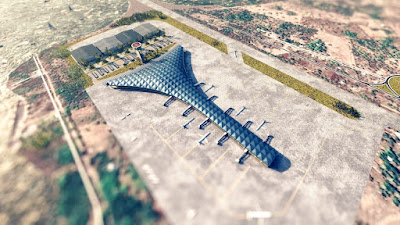 Artist rendering of proposed airport on CEPA web page
Leaving aside the question of environmental impacts and the displacement of local residents, the government has yet to disclose the total cost of this project and how it will be financed.  The government has not informed the public whether operation of the airport will be a public-private partnership owned together with some private business partner.
Nayib Bukele appears to be following the Field of Dreams approach to building out this airport:  "If you build it, they will come."  Certainly today the tourism infrastructure of hotels, restaurants and developments in El Salvador is all located much closer to the current airport.  With its new $56 million terminal expansion, the current airport in the department of La Paz is far from overburdened. While the eastern part of the country boasts nice beaches and access to the Gulf of Fonseca, it is served only by a single two lane highway.  Will airlines schedule flights to far southeast El Salvador before there are reasons for travelers to arrive?   Will investors build hospitality locations before airlines begin scheduling flights?  One answer may be a report that the airport will also be used by the Salvadoran military.
It would be good if the government would publicly release the study of economic feasibility it received last month.   What assumptions are needed to support the Bukele and the government's belief that this airport will be a net benefit for the region and the country?
Airports Economy Environment Nayib Bukele Tourism