Overview of the Salvadoran economy

In El Salvador, the economy and household finances have become the number one worry of Salvadoran families, outpacing crime and insecurity.  Today we take a look at the macroeconomic picture of the country.

Public opinion polling in January showed that the vast majority of Salvadorans were concerned with inflation, with 93% believing the cost of basic foodstuffs had risen, and 78% believing that the overall cost of life had risen some or a lot.

Inflation in El Salvador parallels inflation in the US.  The Consumer Price Index in El Salvador increased 6.1% in 2021, similar to the US rate of 7.0%.  The rise in prices affects the everyday consumption of all Salvadorans.   For example, according to this January article in La Prensa Grafica, the price of pupusas has increased by ten cents from vendors in the center of San Salvador due to increasing price of cheese.  RevistaFactum explained that cheese prices were rising for a variety of reasons, from increased costs of production, especially in Nicaragua which exports most of the cheese used in pupusas, to a scarcity of milk from cows during the dry season of the year.

The price of wheat has a direct impact on bakeries, and as world wheat prices have risen dramatically, bakers are being forced to pass on costs.

Gas prices continue to surge in El Salvador as they have done across the world. The prices at the pump are specified by regulation, and each time a price increase is announced, long lines form at gas stations the night before the increase is effective.

Thursday night, president Bukele announced series of measures to assist Salvadorans with inflation from world energy prices, primarily with a three month reduction in gas taxes, increased propane subsidy, reduced tariffs and facilitation of food imports, and increased enforcement of pricing rules including bus route fares.   Government social media accounts were filled with photos of police checking the fares being charged on bus routes, and one bus company owner was arrested and paraded before cameras for allegedly violating pricing rules.  The government announced it was using soldiers to drive those routes now.

Most of the growth in jobs actually occurred in the public sector as the government under Nayib Bukele appears to have gone on a hiring spree.  From June 2019 to June 2021, the number of jobs in the private sector increased 3.6% while the number of jobs in the public sector jumped 17.7% according to a recent analysis by the UCA Department of Economics.

Most Salvadorans remain underemployed or working only in the informal sector of the economy.

Economic growth in 2021 compared to the first pandemic year in 2020 has been strong.  El Salvador closed 2021 with a growth rate in its Gross Domestic Product of approximately 10.3%.  Given that El Salvador's economy contracted between 7-8% during 2020, the recent strong performance marks a return to the trajectory the economy was on prior to the pandemic.  According to figures from the BCR, the economy grew approximately 5.7% in the two years from 2019-2021.

There is a strong argument to be made that El Salvador's ability to economically manage the pandemic years of 2020 and 2021 is due almost entirely to the receipt of remittances from the Salvadoran diaspora.  Remittances grew by a strong $1.6 billion in 2021, climbing to $7.5 billion.  That growth in remittances is more than the growth in the country's GDP during the past two years.  Without those dollars sent to families back home, the Salvadoran economy would be struggling much more than currently.

On February 19, Nayib Bukele asked in a tweet: "Are we looking at another double digit GDP growth this year?"   The answer is "probably not."

The International Monetary Fund expects annual growth of 3.2% in 2022. Fitch Ratings expects 2022 growth to be in the range of 3.5%.  El Salvador's Central Reserve Bank is forecasting 4.0%.   No one is forecasting a second year of double digit growth for the country.
Still, business in El Salvador appear to be optimistic.  The Chamber of Commerce and Industry in El Salvador released a poll March 10 of Salvadoran businesses showing optimism for 2022, with 59% expecting to see increased sales compared to 2021 and 63% planning to further invest in their own companies.

El Salvador's government has a growing debt problem.   The amount of money the government owes creditors is growing.  The ratio of debt to GDP is ever larger.   The interest rates the government must pay continue to climb as financial markets find El Salvador to be an increasingly bad credit risk. 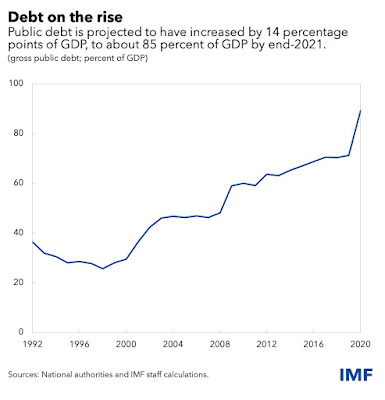 The amount of debt carried by the Salvadoran government has increased significantly during the Bukele administration both in real terms and as a percentage of GDP as a result of pandemic spending and new government initiatives.  The government's debt is projected by Fitch Ratings to reach 87% of GDP in 2022, up from 70.3% in 2018.

At the same time as the debt is increasing, financial markets also are finding the government to be an increasingly risky borrower.  J.P. Morgan now ranks El Salvador as second only to Venezuela in Latin America for the risk that it will default on its sovereign debt.  According to CoinDesk, the financial markets' perception of the risk that El Salvador will default has increased by 400% since September 2021, the month Bitcoin became legal tender and the country started buying the crypto-currency.  Just in the week ending March 9, the value of El Salvador's foreign bonds had fallen yet another 14%.

The plunging confidence in El Salvador's ability to pay its obligations is clearly concerning the Bukele government.  Minister of the Treasury Alejandro Zelaya told the world on March 10 that the El Salvador's default risk is “zero.”   The president’s office tweeted out a photo of Bukele meeting with bondholders of Salvadoran debt, reportedly assuring them that El Salvador will pay its obligations. No details of the meeting were released.  There is no indication yet that the financial markets have made any reevaluation of El Salvador's creditworthiness based on these assurances.

The existence of Bitcoin as "legal tender" in El Salvador is very unlikely to change any of the current trends in a meaningful way or to solve the government's debt crisis.  In the Chamber of Commerce survey, 92% of the businesses surveyed said Bitcoin was irrelevant to their business prospects.  The government so far has lost almost $15 million on its Bitcoin investments based on today's BTC price.  The so-called "Volcano bond" is apparently being issued by the government's geothermal energy company, and the revenues of the bond are earmarked for buying Bitcoin and building Bitcoin City, not reducing the government's debt obligations.

As has been true for decades, remittances continue to be a financial engine propping up the Salvadoran economy and keeping many families from falling into poverty.  El Salvador has significant needs to import basic foodstuffs and gasoline and so remains exposed to the inflationary impacts of the pandemic, supply chain crises, and Russia's invasion of Ukraine.   The Bukele government has shown itself to be adept at spending money, but not able to show its ability to finance all those plans.   The Bitcoin gambit has so far lowered the country's standing in world financial circles, making improvements in the economic prospects of ordinary Salvadorans even more challenging.