Who's been coming to El Salvador? 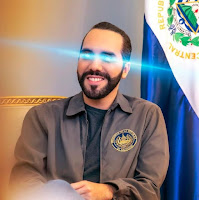 The decision of Nayib Bukele to make Bitcoin legal tender in El Salvador and to link his country's future to the crypto-currency has been followed in 2022 by visits to the country by a cast of interesting characters.

For example, living in El Salvador since January have been Bitcoin hyper-promoters and investors Max Keiser and Stacy Herbert.  They've even announced that they are becoming Salvadoran citizens to be part of this first Bitcoin nation.

On their arrival in January, they were flown in a military helicopter to see the site of the proposed Bitcoin City in La Union department.   The use of taxpayer funds to fly around wealthy investors was decried by many.

The pair, who have heaped praise on Bukele for his supposed wisdom and foresightedness, endorse every move he makes on Bitcoin and just announced they will launch a venture capital fund called "El Zonte Capital" to promote "hyperbitcoinization."

This picture captures the moment when we were discussing economic injustice, human history, war and peace, and the meaning of life.

But, of course, everybody will be looking at @maxkeiser’s shoes🍊 https://t.co/lglzWEAU6m

A company called AstroBabies in January announced on social media that it is bringing the "first ever land based crypto casino" to El Salvador.   Frankly, I have no idea what that means, but apparently the government of El Salvador is backing the initiative.

According to Star Sports News, this includes a virtual casino where guests will be able to buy and sell NFT (non-fungible tokens) with a physical branch in El Salvador with standard casino fixtures such as slot machines, game tables and a VIP lounge. The location in El Salvador has not been disclosed.

A group called CryptoWorldCon came to El Salvador this week to meet with Bukele to discuss  "cypto and blockchain projects" and to present the president with an NFT to thank him for "all the hard work and dedication to his innovative vision as Head of State of a nation that is breaking paradigms."

The red carpet in El Salvador was also rolled out for a visit by actor Daniel Baldwin, one of the Baldwin family of actors which includes Alec Baldwin.    Baldwin was in El Salvador to suggest that he could spearhead the development of a film industry in the Central American country.  Supposedly the B-list actor has leads on $300 million to be invested in movie making in El Salvador.

El Salvador's Ambassador to the US, Milena Mayorga, was on hand to escort the actor every step of the way.   Her description of the significance of the visit was, shall we say, over-the-top:

This is the beginning of building the most significant film and television industry in Latin American history. 🎥🎬 pic.twitter.com/W9dJzP2XRc

Such an amazing meeting and dinner with @nayibbukele and @MilenaMayorga
Our plan to bring the film and television industry and much more to El Salvador has begun. GOD is great. pic.twitter.com/TVkrd4Op5n

Political commentator Paolo Luers responded to all the hype about Baldwin's visit in his column:

So Daniel, I don't buy your fantasies. I don't think you have the prestige to attract serious filmmakers and investors, nor the talent to build something authentic and lasting. Enjoy this visit as an exotic vacation, complete with presidential dinner and military escorts.

People-watching at the Presidential Palace in El Salvador has never been quite so interesting.