Of Chivo Pets, Boomer Senators, and a "Haven for Freedom"

Today's post is a mashup of a variety of things being covered in El Salvador in the last few weeks.

President Nayib Bukele announced the opening of the Chivo Pets public veterinary hospital.  People will be able to bring their pets to the modern new facility for treatment which will only cost 25 cents, as long as they pay using the Chivo digital wallet or another cryptocurrency wallet:

Wanna watch a video about #Bitcoin and pets?@chivopets is the first ever #Bitcoin fully funded animal hospital.

Bukele has said that the Chivo Pets hospital was paid for with the government's profits on Bitcoin.   The problem with that statement is that as of today, the government has not seen profits, but instead has accumulated unrealized losses of $15.6 million USD at today's prices:

If nothing else, tying a public veterinary hospital to Bukele's Bitcoin initiative for his country is a clever public relations tactic, one which gets lots of favorable mentions in the Bitcoin enthusiast community online.  Such social media focused actions are typical for Bukele says this article in Business Insider: El Salvador's Nayib Bukele is a president for the meme-stock generation: He's obsessed with stonks, silly numbers, bitcoin, and the 'dip'.
The Wall Street Journal did a feature length balanced story on Bukele and Bitcoin recently titled Can Bitcoin Be a National Currency? El Salvador Is Trying to Find Out.  We get a glimpse at some of the problems afflicting the Chivo Bitcoin Wallet rollout in El Salvador in this article: Athena Sues Ex-CEO For Trying To Take Over Chivo ATM Business In El Salvador
Beyond Bitcoin, Bukele recently tweeted that he will be sending a set of legal reforms to the Legislative Assembly to modernize El Salvador's economy and facilitate the issuance of the Bitcoin "volcano bonds":

The plan is simple: as the world falls into tyranny, we’ll create a haven for freedom.

As of the date of this post, the actual text of these reforms have not been released or studied in the Legislative Assembly.  At least one retweet from the president made clear that in addition to citizenship for foreign investors, the "haven for freedom" means a haven for freedom from taxes: 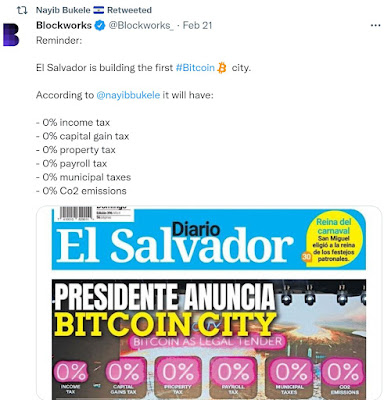 In Washington, a bipartisan group of US Senators introduced legislation to have the State Department report on risks of El Salvador’s adoption of Bitcoin, citing risks of use by bad actors like China and others seeking to avoid sanctions.   Just the possibility of such legislation produced an angry, sarcastic response from Bukele who, Bloomberg writes, Warns ‘Boomer’ U.S. Senators Not to Meddle in El Salvador.   CoinGeek had this take on Bukele's response: El Salvador prez Nayib Bukele warns US he’s the only one allowed to ruin his country

China Expands Influence in Central America, VOA gives an overview of how China is expanding its influence in El Salvador and the rest of Central America through donations and other initiatives.  The Los Angles Times asks In Latin America’s new Cold War, will China lift up autocrats?