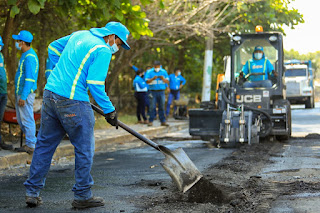 Historically, local political campaigns in El Salvador have had a very predictable course. Whenever there are municipal elections, suddenly local projects in communities get developed with municipal funds.  A street may be repaired, a park refurbished, or trash receptacles installed, usually with a sign posted reminding voters who is currently the mayor of the town.

Now, much more of that spending in El Salvador will be concentrated in the national government controlled by the Bukele regime.  A new law slashes revenue sharing with towns and cities and replaces those funds with delivery of public works projects. In past years, 10% of the revenue collected by the national government would be distributed to local municipalities for their use through a fund known as FODES. In November the Legislative Assembly reduced FODES revenue sharing by 85% to just 1.5% of revenue, and instead local municipalities will receive public works projects, under control of a Directorate of Municipal Works ("DOM" for its initials in Spanish), to replace the funding which was removed.
The DOM has a $329.9 million budget for 2022.   And just like a local mayor before a municipal election, the DOM is making sure that everyone knows whom they should thank for the new public works project in town.
There is one dominant color for the DOM and its social media. That color and its typeface are the color and typeface of the Nuevas Ideas political party of Nayib Bukele. It is the cyan blue color which dominates all Nuevas Ideas branding. 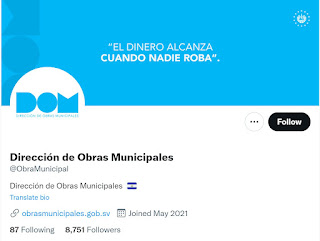 DOM Twitter Profile
One of the first works of the DOM is a national plan of pothole fixing (Plan Nacional de Bacheo). Pothole fixing has been a mainstay of Nayib Bukele's political career. At this link you can see a video of his street paving program when he was the mayor of the small town of Nuevo Cuscatlan.  Notice that even in 2015,  the workers paving the streets are dressed in cyan blue. Bukele included pothole fixing as another of his programs when he was the mayor of San Salvador.  Now his administration has given the country the national pothole plan.

FOCOSTV has produced a video report on these pothole projects rolled out by the DOM this month. Events to inaugurate the pothole project in each new town look more like Nuevas Ideas campaign rallies, dominated by cyan blue than they do an official event of a government ministry. The workers for the DOM have all been dressed in cyan work clothes.  Even orange traffic cones have been turned cyan blue, points out FOCOS. 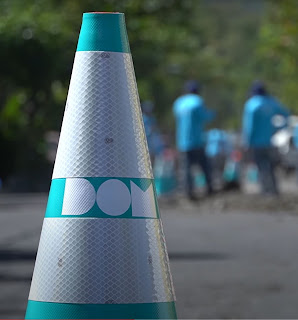 FOCOS pointed to 14 separate events in 14 separate municipalities to "inaugurate" the national pothole plan. Deputies from Nuevas Ideas along with the head of DOM and the mayor from the same party  mount the speakers' platform. They are accompanied by a similar number of photographers and video cameras from the administration's public relations arm.  Construction equipment is carefully positioned for the best photographs. In one event in Apopa, the Nuevas Ideas officials mentioned Nayib Bukele 23 times in the 33 minute presentation.

Cyan and white signs for the National Pothole Project are erected which include one of Nayib Bukele's campaign slogans "El dinero alcanza cuando nadie  roba" (There's enough money when nobody steals). 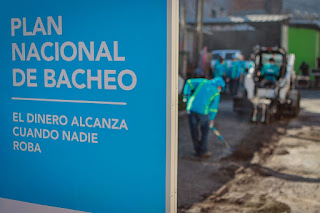 Those events continue after those counted by FOCOSTV.  Today, January 26, the DOM showed up in the town of Santiago Nonualco with Nuevas Ideas deputies to again celebrate pothole fixing. 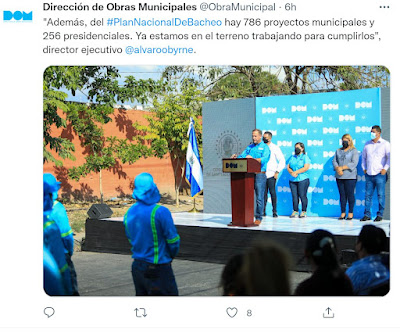 By running all municipal infrastructure projects through the DOM, Bukele and Nuevas Ideas is able to get credit even in municipalities where the mayor's office is controlled by an opposition political party. No longer does an opposition party mayor have the money in their budget to develop municipal projects shortly before the next election.

Street repairs are a legitimate and necessary government function.  Bukele and Nuevas Ideas have shown how to nationalize and incorporate that function into the context of a well-oiled public relations and political campaign machine.