30th Anniversary of 1992 Peace Accords will not be officially celebrated. 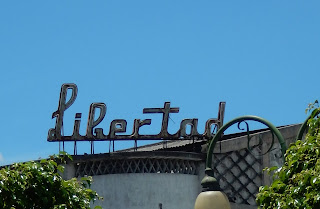 Sunday January 16 marks the 30th anniversary of the signing of Peace Accords which ended El Salvador's 12 year bloody civil war.  In the country there will again be no government sponsored celebration of the anniversary following the wishes of president Nayib Bukele who at the end of 2020 labelled the Accords a "farce."   This week the Salvadoran Legislative Assembly voted to eliminate the 1992 law which established January 16 as a day of celebration of peace and the Accords and voted to commemorate instead the victims of the armed conflict.

On the 25th anniversary of the Peace Accords in 2017, a Monument to Peace and Reconciliation was erected on the western side of the capitol city.  The monument includes figures of a government and guerrilla soldier walking arm in arm with doves of peace overhead overseen by a figure of an earth mother goddess.  Today the Bukele government is in the process of dismantling it.

Opponents to Nayib Bukele are calling for a new protest march Sunday in the capital city of San Salvador as their own way of highlighting the principles of the Peace Accords and their opposition to the authoritarian direction of the Bukele regime. 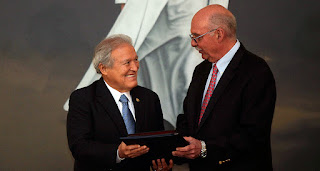 In October 2014, former president Alfredo Cristiani of ARENA delivered to current president Salvador Sanchez Cerén of the FMLN, the original signed version of the 1992 Peace Accords which Cristiani had kept in his house for more than 20 years.  (Nayib Bukele and allies would call this photo more evidence of the "pact of los corruptos.")

Why the hostility of the Bukele regime to a set of documents which ended a bloody civil war which claimed the lives of so many?  Here is what I wrote on last year's anniversary of the Accords:

So why is Bukele attacking the Peace Accords?   To celebrate the Peace Accords and the reforms they instituted would be to celebrate many of the norms which Bukele has begun to trample.   He cares little for the institutions of constitutional democracy.   The separation of powers checks him from acting freely.   He attacks those who would champion human rights.   While the Peace Accords intended to remove the military from domestic affairs, Bukele sends the military out into the country with ever more frequency to perform all sorts of internal tasks from policing to delivering food packets, to capturing grasshoppers, to enforcing sanitary quarantines of entire towns.
Moreover, one of Bukele's constant themes is to denounce his opposition as a corrupt pact between ARENA and the FMLN.  Because the Peace Accords are signed by the FMLN and the government then controlled by ARENA, he attacks the peace agreement as part of their supposed corrupt bargain.
These are the efforts of a president to deny and revise history so that the lessons of history cannot be learned by the current generations.

Only the foolish would assert that El Salvador has  lived up to the ideals of the Peace Accords in the three decades which have followed.  The hard work to establish democracy, to enforce the rule of law, to respect the separation of powers, and to combat corruption has fallen short repeatedly.   Economic inequality, violence and violations of human rights persist. But the failure of the country to live up to those ideals embodied in the Peace Accords does not mean the ideals themselves should not be highlighted and lifted up. In fact, El Salvador three decades later needs to be reminded of those ideals more than ever.

Posts from prior anniversaries:

Lynne Ternosky said…
At the time the Peace Accords were novel in world civil internal country struggle resolutions.
I am delighted to have tried to re-enforce these values for years of my life in El Salvador.

Times change. Leaders change. New ideas of new times are tried and tested. Even the United States sees how hard it is to maintain the freedoms of democracy as many younger folks in their rebellions against norms and with new ideas will be challenged and need the energy many had to establish democratic ideas of the time, and change driving forces into ideas of this time and do the tests of these newer ideas.
Remember failure often is the best teacher. But I am glad to see more human power in in-country food distribution in times of pandemics and heightened unemployment, even if it is brief and seen as too little.
Good update Brian and food for thought for we folks far away with many issues right here.
11:47 AM