The 40 year quest for justice 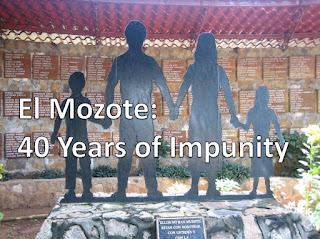 Fourth in a series

The story of the quest for justice for the victims of the massacre at El Mozote is a story of repeated obstacles placed by El Salvador's political and judicial systems. 40 years later, this crime against humanity remains unjudged and unpunished through the Salvadoran courts.  Today we look at the efforts of human rights advocates for the victims who have refused to give up.

December 10-13, 1981.  Troops of the Salvadoran armed forces massacre 988 children and others in El Mozote and the surrounding communities.

October 26th, 1990.  Pedro Chicas Rivera, survivor of the massacre in La Joya, a village near El Mozote, presented the first criminal complaint for the massacres in La Joya, El Mozote, and the surrounding communities before the court in San Francisco Gotera with the assistance of Tutela Legal, which was the human rights legal office of the Archdiocese of San Salvador. The case, started while the civil war was still taking place, faced one set-back after another. When auxiliary attorney Hugo García requested inspection of the massacre site, exhumations of the victims, and that the president name the officials in charge of the military operation, he was immediately removed from the case. The judge assigned to the case stated that he could not investigate the case without orders from the president of the Salvadoran Supreme Court, and later admitted that he had received orders from high-level officials to definitively close the El Mozote case.

With the war concluded and with the backing of the UN, exhumations of the massacre site begin. 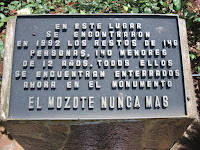 All them are now buried in the monument.  El Mozote Never Again.

March 15th, 1993.  The UN Truth Commission following the war presented the findings of its investigation of war time atrocities including the El Mozote massacre to the Secretary General of the United Nations.  The report includes the following passages:

There is full proof that on 11 December 1981, in the village of El Mozote, units of the Atlacatl Battalion deliberately and systematically killed a group of more than 200 men, women and children, constituting the entire civilian population that they had found there the previous day and had since been holding prisoner....

There is sufficient evidence that in the days preceding and following the El Mozote massacre, troops participating in "Operación Rescate" massacred the noncombatant civilian population in La Joya canton, in the villages of La Ranchería, Jocote Amarillo y Los Toriles, and in Cerro Pando canton....

The President of the Supreme Court of Justice of El Salvador, Mr. Mauricio Gutiérrez Castro, has interfered unduly and prejudicially, for biased political reasons, in the ongoing judicial proceedings on the case.

March 20th, 1993.  The Salvadoran Legislative Assembly waited only five days after publication of the UN Truth Commission Report to pass the General Amnesty Law for the Consolidation of Peace, which provided “broad, absolute, and unconditional” amnesty to everyone who participated in political and common crimes in any form during the war, including those previously exempted under the reconciliation law. The Amnesty Law went so far as to explicitly preclude any further investigation into these cases.

With the passage of the Amnesty Law, the 1990 case in front of the court in San Francisco Gotera is closed and the process for justice in a Salvadoran court for the El Mozote massacre comes to a halt.

November 3, 2010.  With justice blocked within El Salvador, advocates then turn to the InterAmerican system of justice of the Organization of American States.  The process is a slow one, with the government of El Salvador dragging its feet or not participating throughout.  Finally in 2010, the InterAmerican Commission on Human Rights issues a strong decision:

The shocking number of men, women, children and older people who died at the hands of the Atlacatl Battalion must remain etched in the memory of Salvadoran society so that events such as those described in this report will never be repeated. The State of El Salvador has an urgent duty to pay its historic debt to the memory of the victims, their surviving relatives, and the people of the country who, nearly 30 years after the events, are still unable to heal the wounds through acknowledgment of the truth and punishment of those responsible for these crimes against humanity. Only when this happens will Salvadoran society achieve the national reconciliation it longs for.

The Commission instructed the Salvadoran state to compile a registry of victims, to fully and impartially investigate and establish responsibility for the massacre, and to remove any bar to the proceedings created by the Amnesty Law.  But the Amnesty Law remained in place and no legal proceedings were reopened.

In short, it has been verified that, in the instant case, the State was organized as a means and resource for perpetrating the violation of the rights that it should have respected and ensured, and this has been aided by a situation of impunity of these grave violations, encouraged and tolerated by the highest State authorities, who have obstructed the course of the investigation. The Court notes that the criminal proceedings have been archived for more than 19 years owing to the decision to dismiss them, without having individualized prosecuted and, eventually, punished any of those responsible. Based on the foregoing, the Court finds that the State failed to conduct a serious, diligent and exhaustive investigation ex officio, within a reasonable term, into all the facts relating to the massacres of El Mozote and nearby places. Consequently, the Court considers it essential that, as soon as possible, the State rectify the conditions of impunity verified in this case by removing all the obstacles, de facto and de jure, that have promoted and maintained it.

July 13, 2016.  A breakthrough finally happens in 2016.  The Constitutional Chamber of El Salvador's Supreme Judicial Court ruled that the 1993 Amnesty Law was unconstitutional and that the law cannot bar prosecution of crimes against humanity.

Furthermore, in relation to crimes against humanity, the Chamber notes that we are not dealing with individual and isolated behaviors of those who committed them; on the contrary, they are the result of guidelines and orders emanating from an organized apparatus of power, and where the hierarchy, command and automatic functioning of the armed forces is clearly visible. In this sense, the material or direct perpetrators generally acted under the direction of the top leaders of the military, paramilitary and guerrilla structures to which they belonged. All of which implies a necessary criminal responsibility both of the direct actors and of those who gave the respective orders violating fundamental rights, and of the commanders who, being in the legal duty to prevent human rights abuses committed by their subordinates, did not do it or failed to exercise any kind of control.

One group of victims impacted by the Constitutional Chamber's decision to void the Amnesty Law were the relatives of those massacred at El Mozote noted the Washington Post:

Rosario Sánchez, whose mother and 12 other relatives were killed in El Mozote, said she was relieved to hear that the amnesty law had been declared unconstitutional.

“For years we’ve been hearing that because of the amnesty, the soldiers who killed our relatives can’t be tried, and we can’t receive any kind of reparations for our loss,” she said. In April 2015, government forensics investigators dug up the bones of Sánchez’s family and two dozen other victims of the massacre, but the investigation has since stalled because of a 1993 decision to archive the case in light of the amnesty law.

With this ruling from El Salvador's highest court, the 1990 case originally filed by Pedro Chicas Rivera in the court in San Francisco Gotera could be reopened.   Next in this series -- The Courtroom.

For more information on this road seeking justice, see:

El Mozote - Seeking Justice in Spite of the Amnesty Law

Greg said…
We must not overlook the upcoming 40 year anniversary of the 1982 assassination of four Dutch journalists in El Salvador. An assassination determined by the UN Truth Commission AND the near-immediate "boots on the ground" investigation made by Dr. Todd Greentree, Colonel (ret) John McKay, and others from the U.S. embassy, to have been planned and carried out by Colonel Mario Reyes Mena.

Both Greentree and McKay are likewise key in their initial reporting and most recently in working with Professor Terry Karl on behalf of the investigating judge regarding El Mozote.

As of this month two agents from the ICE War Crimes Unit are working with the Dutch Prosecutor's Office in Holland regarding the deportation of Reyes Mena from the United States so he might stand trial at the Hague.
4:19 AM