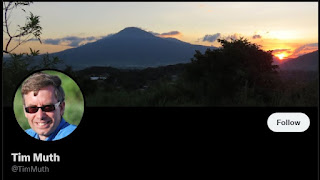 These were my top 10 tweets of 2021 by number of retweets. They are presented here in chronological order.  Not surprisingly, they are dominated by news created by Salvadoran president Nayib Bukele.   Jan 31 -- relating to an armed attack on members of FMLN leaving a rally.


Nayib Bukele, in an awful tweet when no details are yet available said "it appears that the moribund parties have put in motion their ultimate plan. What desperation to not lose their privileges and corruption. I thought they could not fall lower, but they fell." https://t.co/rsQilUPEvT

Feb 11 -- after AP reported Bukele had been snubbed asking for a meeting with Biden administration.

May 7 -- financial market reaction to May 1 impeachment of judges and attorney general.


Here is graph if you include the earlier dates for that same 2052 bond. pic.twitter.com/3Kt9Ww60rr


"A government which fails to honor the current constitution, has lost the moral authority to propose amendments to that document, no matter how modern and progressive those amendments might be." https://t.co/YsmvnFJHSR pic.twitter.com/mtd1LmrGQX


And then there is the head of Nuevas Ideas in the Legislative Assembly who clearly did not read the Time Magazine description of why Bukele is influential before he retweeted it. https://t.co/D8hXmJodXC


Posting in case anyone is trying to change the subject. https://t.co/AtkyEB6iOe


Civil society groups in El Salvador have called for more protest marches this morning against Bukele govt policies. Many reports on Twitter this morning of military and police checkpoints on routes into San Salvador. https://t.co/MynNCVROYa


Not sure if this is a measure of the effectiveness of marches in San Salvador today, but @NayibBukele tweeted or retweeted about them 41 separate times starting this morning.


If you assume Bukele has not sold any BTC that El Salvador purchased, with price at 10:40PM tonight, of 1 BTC = $47,172, then the approximate accumulated loss on El Salvador's BTC portfolio is now $5.68 million. pic.twitter.com/yhw12jAPUr

My most "liked" tweet was this one, which was also the only one of my tweets retweeted by Bukele:

Vaccinations for COVID-19 in El Salvador now open to persons of any nationality, and down to age 6. Booster (3rd dose) shots available 4 months after first round of shots. https://t.co/00obZmQAfV