December 26, 2021
The flow of humanity from El Salvador across the US southern border persists at some of the highest levels seen in the past ten years. An average of 270 Salvadorans were detained at the US border each day during the 12 months from October 1, 2020 to September 30, 2021. This was the highest total in the past 10 years as shown in the following chart taken from US Border Patrol statistics. The majority (almost 57,000) were expelled immediately under Title 42, the supposed public health measure that lets the US expel without a hearing anyone who crosses the border without documents. 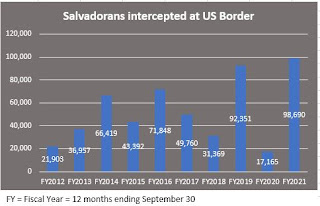 Those trying to enter the US would join the 1,412,000 Salvadoran-born immigrants already living in the US as of 2019.   An estimated 750,000 of them lack a documented legal immigration status.  There are currently 194,134 Salvadorans with pending deportation cases in US immigration courts.
The almost 195,000 Salvadorans living in the US with Temporary Protected Status ("TPS") continue to see the word "temporary" attached to their lives as the Biden and Congressional Democrats failed to keep campaign promises to create a path to citizenship for TPS holders as part of Biden's "Build Back Better" Act.   Also impacted were more than 25,000 Salvadoran "Dreamers" protected by DACA, who did not get a permanent pathway written into law for them despite wide popular support among the American public.
There are as many as 1.4 million second generation Salvadoran children born in the the United States, creating a diaspora population of as much as 2.8 million people. By contrast, the population currently within El Salvador's borders is approximately 6.7 million.
The millions of Salvadorans abroad have been sending money back to their families in the country at a record pace in 2021. Through the month of November, remittances totaled $6.77 billion, an increase of more than 28% from the similar period in 2020. Those remittances are an extremely important financial engine for the Salvadoran economy.
The numbers are clear.  Neither the statements of US Vice President Kamala Harris telling Central Americans not to come to the US, nor the promises of Nayib Bukele about El Salvador's bright crypto-driven future, have served to stem the exodus of tens of thousands of Salvadorans heading towards the US. The ties of blood and family which interconnect these two countries are strong bonds which can offer refuge for those fleeing in desperation, or for those hearing the siren song of the mostly mythical American dream.
Migration