Anniversary of the 1980 murder of US churchwomen 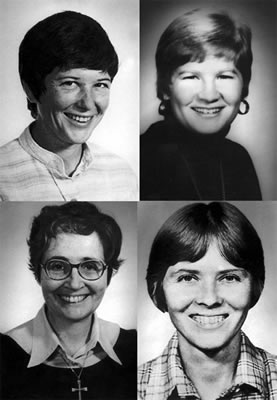 December 2 marks the 41st anniversary of the cold-blooded rape and murder of 4 US churchwomen in El Salvador by a military death squad.  It was 1980, a year which saw the assassinations of archbishop Oscar Romero and many other lay and religious workers engaged in the struggle for a just society in the opening bloody years of El Salvador's civil war.  Sisters Dorothy Kazel, Maura Clarke and Ita Ford, and lay missioner Jean Donovan were slaughtered for their commitment to El Salvador's poorest citizens.  It is a crime which remains unjudged and unpunished in El Salvador.

In subsequent years, many in the US came to know the story through the 1982 documentary Roses in December, which profiles Jean Donovan.

Journalist Gene Palumbo covered El Salvador during those bloody years and wrote a review of Roses in December.  As he described in a 2010 note in Commonweal on the 30th anniversary of the murder of the churchwomen:

When I arrived here in El Salvador as a freelancer in early 1980, I spent my first week in the port city of La Libertad, trailing after Jean and Dorothy and other members of the parish team. When I left to go to San Salvador at the end of the week, I fully expected to see them again, but before I could make a return visit, they were murdered.

Here is Palumbo's 1982 review, republished with his permission.

Roses in December
Document of Courage

"Remember?" said Ana Carrigan to her coproducer, Bernard Stone. "Remember when we came back from those first interviews, and you said, 'If we get to the end of this film, we're going to be different people?'"

He nodded, and they agreed he'd been right.

Their film, Roses in December, is likely to change other people, as it did them. It tells the story of Jean Donovan, the lay missioner who, along with three nuns, was raped and killed by members of El Salvador's security forces in December 1980.

Carrigan and Stone, along with coproducer David Meyer, tell the story through a combination of interviews with Donovan's family and friends, excerpts from her diary and letters and film clips from the United States and El Salvador.

Carrigan and Stone said that in the beginning they were constantly asked, "Why isn't the film about the nuns?"

They were extraordinary, said Carrigan, but in a way, being nuns categorized them.

An audience could respond by saying, They're special, they're different, that could never be me.

There was, Carrigan and Stone felt, a greater chance that an audience might identify with Jean.

She was surely no Therese of Lisieux. In the film one of her friends from Cleveland recalls how "I used to get terrified before we'd go into a bar. Jean would say, 'No problem.' We'd walk up and there'd be a bouncer at the door. He'd say, 'Can I see your I.D., please?' Jean would open her wallet, hand him her Mastercharge and say, 'Does anyone you know under 21 carry one of these?'" 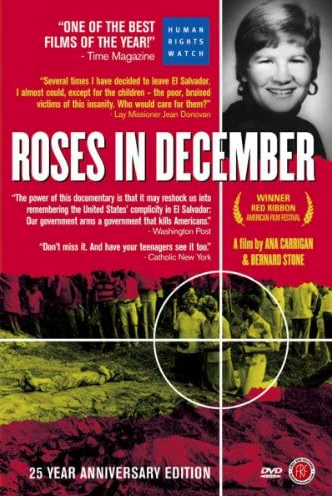 In late 1977 Donovan surprised everyone when she announced that she was going to El Salvador as a lay missionary, as part of a team from the Cleveland diocese. Her parents went out to buy a map to find out where El Salvador was.

Jean's brother, Mike, thought she was joking. A friend in Cleveland asked why she was going: "I said to her, 'You've got a beautiful apartment, a car and a motorcycle, and a job that other people would love to have.' But she said she needed more."

From the time she arrived in El Salvador in September, 1979, the words of her friend, Irish missionary Father Michael Crowley, began to be fulfilled: If you stand with the poor, identify with them, feel their insecurity, their rejection, then you begin to understand in a new way.

The first stage of Donovan's new understanding was reflected in an early letter from El Salvador. "I cant quite put my finger on it, but something inside me is different. The social structure is much different here. It's all so unfair."

As for standing with the poor and feeling their insecurity, that was taken care of for her as the violence closed in. From her diary: "It's unbelievable. People are being killed daily. We just found out that three people from one of our areas were taken, tortured and hacked to death." Later her best friend in El Salvador was murdered outside her house.

The film has interviews with a wide range of people who tried to persuade her to leave El Salvador. They felt they simply hadn't reached her. This may be right, and not so surprising. It brings to mind what Wilfred Sheed said after reading the essays Albert Camus wrote during World War II: "Camus's feeling seems to be that violence so alters ones total experience that those outside it cannot give rational advice to those inside it. They would simply be talking about different things." Donovan was inside it, living out her daily life in the midst of an undeclared war, helping the parish priest to bury the mangled, dismembered bodies of the casualties of that war. She had other reasons for staying. Those reasons were people, Salvadorans she knew who had chosen to stay on, even in the face of death threats. She told me she revered Archbishop Oscar Romero -- threatened innumerable times before finally being killed -- and she may well have had in mind a sermon he gave after the murder of a priest and four teenagers. The killers, he said, "were hoping to terrorize the church into silence and inaction, and if we should oblige them, they will have won. But I do not believe the murders of these five have been in vain. They have preceded us in the experience of the resurrection. We live by that power that even death cannot destroy. We honor them and our faith by living unafraid, in the knowledge that evil has no future."

Donovan gave no complicated answers herself. Her letters and diary entries, her statements to friends, were simple. During her final visit to Ireland, Crowley asked her to speak to a group of teenagers. Says one of them in the film: She said she knew there was a good chance that she would be killed when she went back. But she said, I belong there. I have to go back. I came to see, said Carrigan, speaking of Donovan and the three women she died with, that the meaning of their lives was so rich that death was not ultimately important. Every single day, when they got up, they had to know that that day might be it, the end, as it had been for so many of their friends and so many people all around them. But it was like the biblical saying, Death, where is thy sting? It wasn't a factor for them. If it had been, they could never have done what they did. They simply couldn't have functioned. Roses in December gives us a sense of that richness of life which Donovan had discovered. She who had been willing to lose her life, had found it. This story of one woman's yes may help us utter our own.

This review originally appeared in the August 27, 1982, issue of the National Catholic Reporter (reprinted with permission of Gene Palumbo).

Roses in December can be watched online at Vimeo:

Roses in December from Maryknoll on Vimeo.

For more on the murders and the search for justice after 1982, see the RetroReport documentary here.