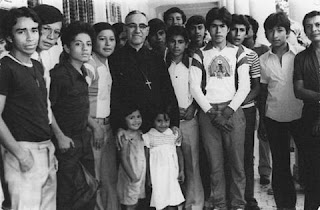 One Christmas Eve, St. Oscar Romero, archbishop of San Salvador, visited the poverty-stricken community of La Bernal to celebrate with its inhabitants:

After the Mass and the First Communions, we fixed up two tables really nice. They were kind of long tables with white tablecloths that hung down to the floor. The children who had received their first communion sat at one table, with Monseñor at the head. The rest of the community sat at the other table. Tamales had been made.

"Two apiece!" said the women who were handing them out.

There was one regular tamal and one sweet one for everyone. Suddenly a little boy appeared out of nowhere. He was a tiny little kid, about four years old. Light haired and covered with dirt. Barefoot, and with a nose full of snot. He came up to Monseñor Romero from behind and pulled on his cassock with his grubby fingers.

"You want some?" Monseñor asked him.

The little boy nodded his head a few times. Yes. This kid was filthy with dirt and stains. Monseñor picked him up, put him on his lap and started feeding him from his tamal. He'd eat one bite and give the next bite to the boy. One for him, one for the boy, one here, one there,,, And so just like that, the two of them ate tamales together that Christmas eve.

From Memories in Mosaic, by Maria Lopez Vigil, 2000.
Oscar Romero