Just after Nayib Bukele announced that El Salvador would be the first country in the world to make Bitcoin legal tender, he also made headlines by suggesting there was "volcano energy" to attract Bitcoin miners to come to the country. 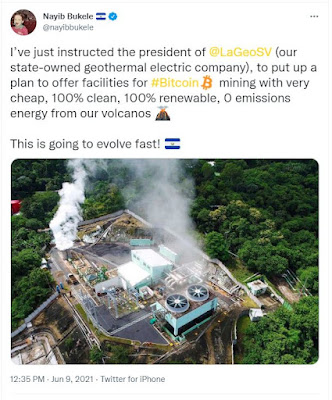 In light of the very energy-intensive nature of Bitcoin mining, it makes sense to understand the overall state of electric power generation in El Salvador.   Global bitcoin-mining currently consumes more electricity than the country of Argentina.

Official data on electricity generation and use in El Salvador is maintained by Unidad de Transacciones S.A de C.V. which administers the transmission and market for electricity. As shown in the chart below, the four principal sources of electric power in El Salvador currently are hydropower, fossil fuels (primarily bunker diesel power generation), geothermal, and imports (primarily from Guatemala). Renewable sources such as solar, biomass, and wind made up a small but growing 9% of total electricity sources. 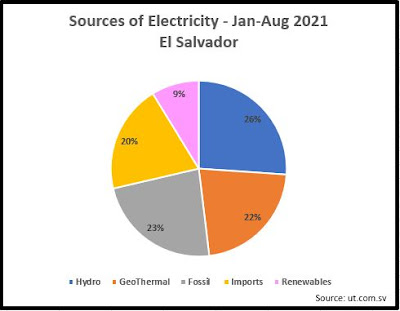 In the next few years there will be real additions to the domestic installed electrical generating capacity in El Salvador as a liquefied natural gas generation facility comes online and the El Chaparral dam project is completed. El Salvador is also seeing the addition of various sources of wind and solar power generation. These new sources could reduce the country's imports of electricity or reduce the use of expensive and relatively costly and dirty diesel generators.

For a comprehensive look at fuel consumption in El Salvador, check out the report prepared by the International Renewable Energy Agency: Renewable Readiness Assessment - El Salvador  issued in September 2020 and produced in conjunction with the Salvadoran government.

The liquefied natural gas facility Energía del Pacífico is in the final phases of construction at the port of Acajutla.  The cost of roughly $1 billion makes this a true mega-project for the country. The owner is Chicago-based Invenergy, and the plant consists of a liquefied natural gas facility offshore at the port, where the liquid is returned to gas form and sent through a pipeline to the power plant onshore. The natural gas then powers turbines to generate electricity.  Natural gas, although a fossil fuel, burns much cleaner than the bunker diesel fuel which is currently in use in El Salvador.

A second mega-project is the El Chaparral dam -- which now is projected to be completed no sooner than 2023 at a cost of more than $760 million dollars. Throughout the 15 year history of this project, it has been beset by construction delays, contract disputes and corruption. (Bukele has announced that the dam will now be named the "February 3" dam for his presidential election on February 3, 2019).
El Salvador has also been taking advantage of its ample sunshine and windy hillsides to install generating capacity from solar and wind power.  In 2017, El Salvador inaugurated the largest solar farm in Central America at that time.  A second solar generating project was inaugurated in March of this year in the department of La Paz.
The country's first windfarm came fully online in Metapan northwestern El Salvador in July 2021.  The windfarm is a project of Ventus.Global. 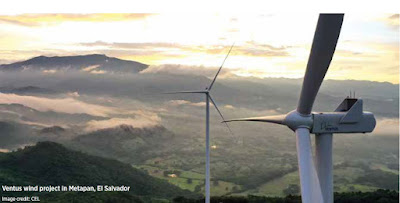 The question raised by Nayib Bukele's proposal to use geothermal energy for Bitcoin mining is why use  El Salvador's natural resources for the crypto-currency.  For example, why not use that electricity to reduce El Salvador's 20% dependence on importing power from Guatemala? Why not use that electricity to reduce the use of diesel powered electric generation which is currently 20% of the country's electric use and at the same time reduce carbon emissions in the fight against climate change?
Bitcoin mining is technology and electricity intensive, but not labor intensive.  The racks of Bitcoin mining computers operate with few humans around, and the Bitcoins generated can be flashed out of the country instantaneously.  China found that Bitcoin mining was not a net positive for the Asian county and banned it. What does Bukele know that China does not?
Bitcoin Economy Energy Nayib Bukele

jcsuperstar said…
Thanks for your work on this article. Isn't the answer to why the electricity isn't used for other purposes because you can't transport energy easily, so that energy produced for example by a volcano that lacks population density in the area is essentially otherwise wasted energy? I know in Texas they are trying to use flared natural gas for example to mine bitcoin because that is also otherwise wasted.
10:14 AM

Unknown said…
The president claims no emissions, but even water vapor is considered a greenhouse emission The picture the president shares of his zero-emission bitcoin endeavor clearly shows water vapor.
2:45 PM