The last few days have seen the battle between Salvadoran president Nayib Bukele and the independent press in his country escalate even further.

The current round began with publication of an important story by digital media site GatoEncerrado about the ruling by El Salvador's Constitutional Chamber which opened the possibility for presidents including Nayib Bukele to be immediately reelected for a second term.  That decision, which altered prior precedent and the recognized interpretation of the Salvadoran constitution has been widely criticized.

In its reporting, Gato revealed that, after the decision was signed but before it had been disclosed to the public, the office of the president was informed of the decision.  The legal assistant to the president, Javier Argueta, contacted the magistrates of the Supreme Electoral Tribunal (TSE) and asked for a meeting. The TSE is the body which oversees Salvadoran elections and decides who can run for office. Argueta conversed with four of five magistrates, with the outcome being agreed that the TSE would need to comply with the ruling of the Constitutional Chamber, according to anonymous sources who spoke to Gato. The TSE sent out a communique to that effect the following morning.

The Gato report noted that the TSE, like the Chamber, are supposed to be independent bodies of the government who do not report to the executive.  Equally questionable was the receipt by the presidency of an early copy of the decision from the judges recently put in place by the president's party, since the presidency was not even a party to the legal case.

In a series of tweets on September 17 and 18, Argueta claimed that GatoEncerrado was legally required to reveal its anonymous sources and threatened repercussions.  He did not, however, deny the facts of the report.

Argueta's demand for sources from Gato were strongly rejected by APES, the Association of Journalists in El Salvador.  El Salvador's criminal code includes the protection of sources for journalists.   APES pointed to article 206 of El Salvador's Code of Criminal Procedure which states that:

[Journalists] will have the right to refrain from revealing to any police authority, public official or judicial official the source of the information that underlies the news, opinions, reports, editorials, that they publish in legitimate exercise of their right to inform.

Then yesterday, Nayib Bukele launched a crude attack on one of the journalists who is a member of the APES Board. 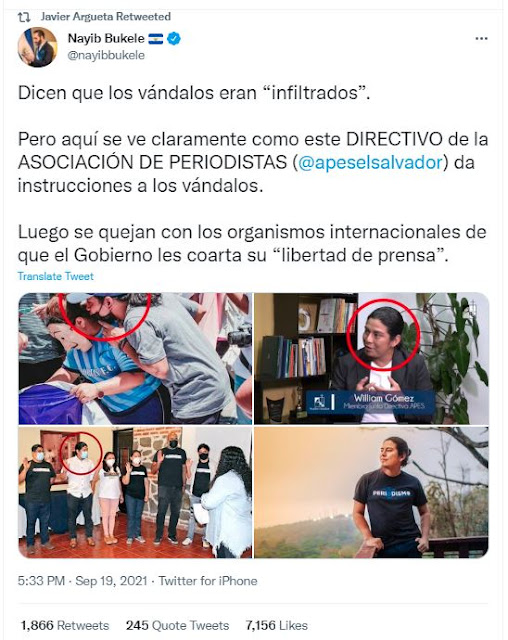 They say that the vandals were "infiltraters."

But here it is clear to see this DIRECTOR of the
ASSOCIATION OF JOURNALISTS giving instructions
to the vandals.
Later the international organizations complain that the Government
is cutting off its "freedom of the press" 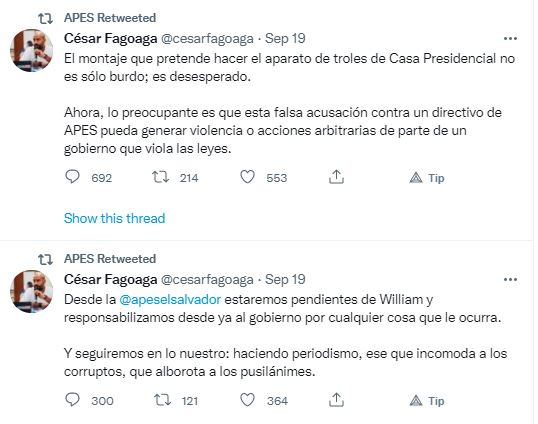 The montage that the troll apparatus of the Presidency tries to create is not only crude; it's desperate. Now, the worrying thing is that this false accusation against an APES director could generate violence or arbitrary actions on the part of a government that violates the law.

From @apeselsalvador  we will keep an eye on William and hold the government accountable for anything that happens to him.

And we will continue in our business: doing journalism which makes the corrupt uncomfortable, that upsets the fainthearted.

Monday morning, APES held a press conference to address the issues and issued a statement.  Fagoaga denounced the threats against journalists and spoke of the protection of journalists' sources under both Salvadoran law and international treaties to which El Salvador was a party.

Karen Moreno, one of the authors of the report in GatoEncerrado, assured the public that the attacks from the government in power were not going to stop their publication from doing its work.  She said that the periodical was not going to reveal its sources, despite the threat from Argueta, because of the obligation it owed to its sources.

William Gomez made clear that he was not the person in the video tweeted by Bukele.  He walked through  photos how he was dressed differently, different body build, and has tattoos on his arm that the subject in Bukele's photos and video did not. Gomez indicated that as a result of the president's actions he had received threats through social media and through telephone.  Gomez insisted the president should apologize for his actions.

APES put out a short video with numerous images of Gomez from the day of the protests, differently dressed, and comparing his tattooed forearm with the clean forearm of the suspect in Bukele's video.

As Fagoaga said, it's clear that Bukele has been looking to discredit APES as an important voice denouncing the repeated aggression by the president and his allies against journalists.

Bukele has his reasons for wanting to discredit the independent press.  Just as Bukele was launching his attack on Gomez, El Faro published another of its exposes about corruption within the Salvadoran government.   The report revealed how Osiris Luna, the head of El Salvador's prison system, had been involved in diverting $1.6 million worth of the government's emergency food packets for sale on the black market.

Another example of quality journalism making the corrupt uncomfortable.