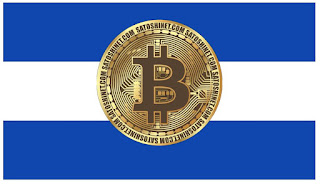 With less than a month until El Salvador's new Bitcoin law goes into effect, few additional details have been released from the Bukele administration about its implementation.  The law envisioned regulations being developed, but no regulations have been released.  The mechanisms for funding a trust fund which would purchase Bitcoin from any merchant who does not want to receive and keep Bitcoin in a transaction are unclear.

It could also be that Bitcoin is not the end goal for the Bukele government.   A report in El Faro titled Bukele's Plan — Launching National Cryptocurrency by Year's End includes video and materials from meetings among Nayib Bukele's brothers and crypto-currency entrepreneurs discussing the potential of launching El Salvador's own crypto-currency, the "Colon-dollar."

The Salvadoran government has said that there are currently no plans to move forward with its own digital currency.

Most reporting about the upcoming implementation of Bitcoin as legal tender in El Salvador either heap skepticism or praise on the plan.   Here is an assortment of recent English language articles with a short quote from each.

It’s clear that amateurs drafted the Bitcoin Law. Now, it’s far too late for Salvadoran banks to comply with any new regulations that might be forthcoming. The banks simply don’t have enough time. And, if Salvadoran banks cannot comply with any new regulations, there is the risk that foreign correspondent banks will be concerned about compliance and risk, and will cut off business ties with their Salvadoran partners.

The transactions at the tiangue [market] don’t rely on credit cards, debit cards, or checks. In the middle of the tiangue, talk about Bitcoin, which will enter into circulation when the Bitcoin law takes effect on September 7, is entirely absent. Some of the people who trade at the tiangue have been coming to the traveling market their whole lives, and many don’t know how to read or write. Among these rural farmers and ranchers, Bitcoin is unpopular.

Noting a “deterioration in the quality of policymaking,” the agency said that the bitcoin law and other measures reflected “weakened governance in El Salvador, raising tensions with international partners – including the United States – and jeopardizing progress toward an agreement with the IMF (International Monetary Fund).”

Even many proponents of Bitcoin say that, while there’s an argument it’s a good store of value, its utility as a payments mechanism is limited.

El Salvador’s adoption of Bitcoin as a national currency will either help or hurt in the fight against transnational crime and gang violence. Only time will tell.

The IMF has warned against countries using cryptocurrencies as legal tender, just over a month before El Salvador is set to become the first nation in the world to allow bitcoin to pay for everything from haircuts to taxes. The Washington-based lender said in a late July blog post that widespread use of cryptocurrencies would threaten “macroeconomic stability”, and potentially also harm financial integrity, through crypto’s links with illicit activity. The IMF did not refer to El Salvador directly. But as it is in talks with the Latin American country over a $1bn loan, its warning suggests 40-year-old president Nayib Bukele’s plans could complicate relations.

We might have more Bukeles soon: millennial influencer populists with slick social media presences who aren’t afraid to use the aspirational chaos of cryptocurrency as a smokescreen for Instagram-ready authoritarianism. The futures of whole nations and their economies may soon be powered by internet hype.

The catalyst behind the bold move is El Salvadorian President Nayib Bukele, a forward-thinking, entrepreneurial-spirited leader who has created a template for other countries like Paraguay, Mexico, Panama and Venezuela to follow. Bukele is the first president elected outside of the two main parties since the civil war, the youngest president in history (at 37 years old) and he won on a platform of modernization. Bukele is keeping his streak of firsts alive by illuminating how bitcoin can transform the country’s financial system for the better and by showing a path for other countries with emerging economies to get out from under the USD's shadow.

Whether through second-layer solutions built on top of bitcoin or through alternatives in the world of decentralized finance, there seems little doubt that the nation-state era of blockchain technology adoption has begun in the developing world, providing an alternative monetary solution to support growth, financial inclusion, and escape from poverty.

As it turns out, El Salvador is Latin America’s most optimistic country about its economic future, according to Forbes. And just wait until they get a taste of what Bitcoin can do, and read “The Bitcoin Standard.” They’ll be ecstatic. And, even better, after they use the Lightning Network a few times and realize that they’re in the future while the whole world remains in the Stone Age.

Bank of America (BofA), one of the largest banks in the US, believes El Salvador has a lot to gain from its decision to adopt Bitcoin.  In a report shared by El Salvador’s President Nayib Bukele to a state-owned publication, BofA highlights the four key upsides to the country’s Bitcoin adoption.