Crypto-colonialism and the Salvadoran Bitcoin experiment

It was a little over a month ago when a delegation of crypto-currency entrepreneurs arrived in El Salvador.  They came to talk about what Bitcoin could mean for El Salvador after the country adopted president Nayib Bukele's proposal to make Bitcoin legal tender in El Salvador. The out-sized interest of the Bitcoin community in this small Central American country, raises questions about who these folks are and why they are so interested. Some previous experiences might provide a cautionary tale for El Salvador as it ventures into its crypto-experiment.

Most prominent of these "Bitcoin ambassadors" was Brock Pierce who tweeted: 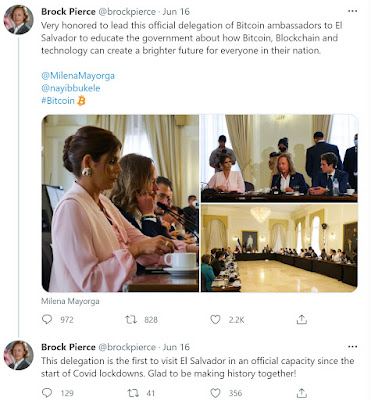 Pierce received a glowing reception from El Salvador's Ambassador to the US, Milena Mayorga. 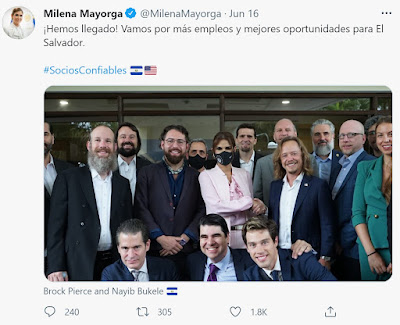 We have arrived! Headed for more jobs and better opportunities for El Salvador.
And after the meeting with Salvadoran officials Mayorga tweeted: 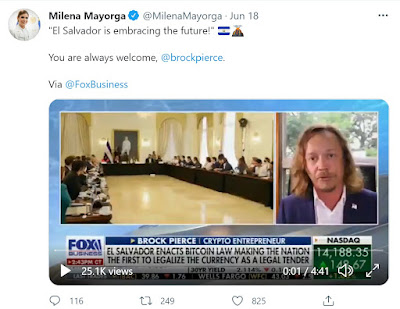 But who is Brock Pierce?  Rolling Stone magazine described him as "The Hippie King of Crypto Currency" in its profile of the child movie star (Mighty Ducks), turned video game entrepreneur, turned BitCoin billionaire.  Pierce made an unsuccessful run as an independent candidate for US president in 2020, finishing with 18,000 fewer votes than Kanye West.   He was served with papers in a securities fraud lawsuit at one of his campaign rallies.

Nine months after that lawsuit was served, Pierce was sitting down to the meeting in the offices of the Salvadoran president to talk about what Bitcoin can do for El Salvador.

The enthusiastic promotion of Bitcoin in El Salvador has echoes of the arrival of Pierce and other Bitcoin entrepreneurs in Puerto Rico following Hurricane Maria.  Attracted to that US colony by promises that Bitcoin trading profits would have favorable tax treatment, the Bitcoin group promised development and hurricane recovery would come with the advantages of crypto-currency.

But that's not how it turned out for Puerto Rico.  The public radio program LatinoUSA recently had this episode titled Puerto Crypto on the Puerto Rico Bitcoin experience. From the introduction:

They were drawn, at least in part, by Puerto Rico’s latest batch of tax incentives—which allow anyone who moves to the territory to pay virtually no federal income or capital gains taxes. When the value of the digital currency Bitcoin surged, early investors found themselves suddenly quite rich. And these tax breaks made Puerto Rico very inviting to them....

The pro-business government at the time was friendly to their vision for the island, and some tech-minded young Puerto Ricans even joined up with them.

But in the months to follow, the promises to come in and change everything didn’t always go over so well with many people from the island. Soon, Pierce and the cryptocurrency enthusiasts were facing resistance and bad press at every turn. And then—Bitcoin crashed.

For more, you might want to read I Survived the Eternal Boy Playground, Will Puerto Rico?, or this Twitter thread from CBS reporter David Begnaud:

The actions by crypto-billionaires like Brock Pierce and his ilk in developing countries around the world have earned the moniker "crypto-colonialism."  In an article last month in Vice titled Crypto-Colonialists Use the Most Vulnerable People in the World as Guinea Pigs, the interest of the crypto-currency world in El Salvador was put into the context:

“Crypto-colonialism is the act of coordinated groups of tech-savvy individuals leveraging their wealth, which is often but not always generated by cryptocurrency investments, to settle in and exploit lands and laws favorable towards continued crypto activities,” Jillian Crandall, an architect and educator at Rensselaer Polytechnic Institute, told Motherboard.

“Crypto-colonialism leverages existing neo-colonialist tools like economic policy, but differs in that it also uses insular internet platforms to galvanize and coordinate like-minded individuals to enact their desires on land,” she added.

So far, the Salvadoran public appears about as excited about the new colonizers from the crypto-world as were the residents of Puerto Rico. Recent public opinion polling showed, despite Bukele's popularity, 82% of Salvadorans are not in agreement with the new Bitcoin law.  Unlike Puerto Rico, however, El Salvador has the unbridled enthusiasm of government actors led by their cyber-cool president.

The crypto-colonizers have been invited in by Bukele.  History has taught that colonization usually leads to exploitation.