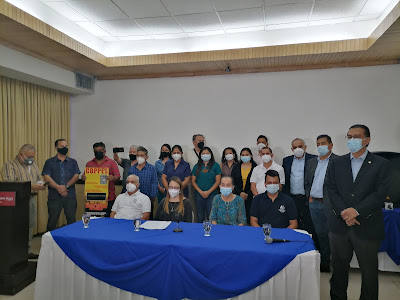 More than a dozen human rights organizations today called on El Salvador's Supreme Judicial Court to ensure that the pending El Mozote judicial proceedings are not further delayed by defense tactics.  In their press conference, the victims decried the latest attempt to forestall justice for the massacre of almost a thousand children, elderly, women and others 40 years ago this December.
From the statement of the human rights advocates:

4. The foregoing generates enormous concern among the victims, who have complained continually of the progress of the judicial process needed to get a judgment that establishes the truth and justice of this case, which constitutes the most massive massacre in the contemporary history of Latin America.
5. The strategy of using judicial resources to delay, challenge judges to get a favorable vote and stop the prosecution of war criminals, has been a strategy used in El Salvador recently, specifically in the case of the massacre of the Jesuit fathers of the UCA, Elba and Celina.

The recent actions started with a motion by the attorney general's office to disqualify one expert witness and to remove Judge Guzman from the case.  The attempt to remove the judge was quickly joined by defense attorneys. The motion to remove Judge Guzman relies on an allegation of bias because his graduation thesis as a law student 28 years ago dealt with the situation of human rights during the civil war.

To further attempt to delay the process, the defense lawyers also filed an additional motion to change the magistrates who will act to resolve the petition to remove Judge Guzman.

These are only the latest roadblocks which have been placed on the road towards a judicial resolution of the case.  The long delays for justice have continued under president Nayib Bukele, who came into office promising to support the families of victims of the massacre.   Carmen Rodriguez writing in Counterpunch explains:

After 39 years, the Salvadoran government and the military continue to prevent justice and block investigations.

The Salvadoran State has never supported the victims. In addition to the lack of commitment and fulfillment of his word, President Bukele has tried to discredit the judge in the case, the lawyers, activists and the current Human Rights Ombudsman, accusing them of using the massacre as a media show for their “economic gain”.

But also in his last visit to Mozote, the president said that the war and the signing of the peace accords, which put an end to the armed confrontations that cost the lives of more than 75,000 dead and 10,000 disappeared, were “a farce”. “Or what benefits did the Peace Accords bring to Salvadorans?” the president asked in his speech in front of the survivors of the massacre.

Perhaps another symbol that Bukele cares little for this history, he recently placed Roberto Brizuela in place as superintendent of the country's financial system.  Brizuela has a military background and was a founding member of the Atlacatl Battalion, the unit accused of committing the massacre in El Mozote.   Brizuela has, in fact, testified on behalf of the defense in the massacre trial.  His testimony was limited to stating that one of the accused commanders had been wounded in action months earlier and so could not have participated in the massacre.  In his testimony, Brizuela had a convenient absence of memory related to any other fact concerning the battalion and its commanders.

With little support from the executive branch, a complete stonewall from the defense team, and an attorney general's office which appears to have lost any initiative in this case, the victims rightly view this Court run by Judge Guzman as the only body committed to impartial justice in their case.  Success by the defendants in removing the judge could very well bury the possibility of justice for the largest single massacre in the modern history of Latin America.