Migration from El Salvador towards the US has been one defining feature of the past several decades of Salvadoran history.  It is a trend originating in the violence, oppression and poverty of the conflict years and has continued ever since.  This trend does not respect who is in power in El Salvador, including the current president, as illustrated by the current surge in those heading north.

US government statistics show that migration from El Salvador has been accelerating in recent months.  It is also striking how the first three months of 2020 are on almost exactly the same pace as the surge in 2019: 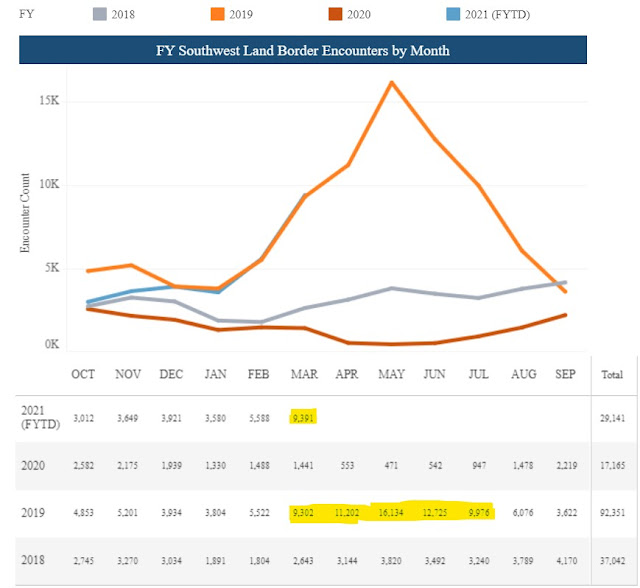 All of this data comes from US Customs & Border Patrol, and reflects (1) Salvadorans crossing the border at ports of entry without documentation and seeking asylum or (2) Salvadorans crossing away from official entry points and being apprehended.  As the statistics show, migration did drop significantly during 2020 and the pandemic.  After hitting a low of 471 detentions in May 2020, however, the number of Salvadorans intercepted at the border has grown every month but one until reaching a total of 9,391 for March 2021, or an average of 300 apprehended every day during last month.  This was the 5th highest monthly total since October 2017, with only the four month period April-July 2019 having higher totals.
The following chart shows the breakdown in recent years for Salvadorans apprehended traveling as single adults, in family groups, and unaccompanied minors. 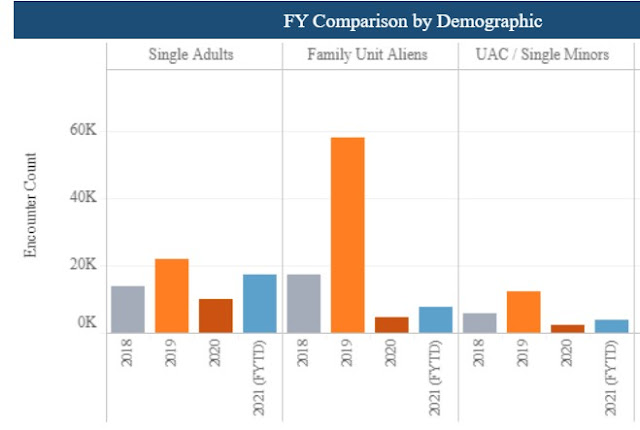 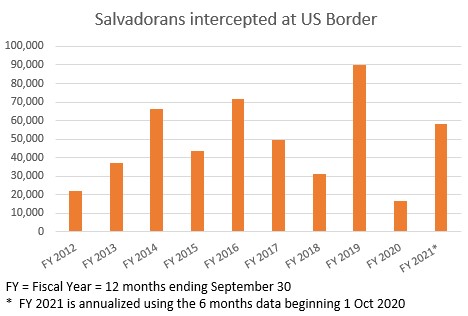 As the chart illustrates, at the current pace, 2021 would be the fourth highest year for migration in the past decade.
How does this compare to Guatemala and Honduras, the other countries in the Northern Triangle?   Because the countries have different populations, it is useful to compare the rate of persons captured at the US border per 1000 of population of each country. 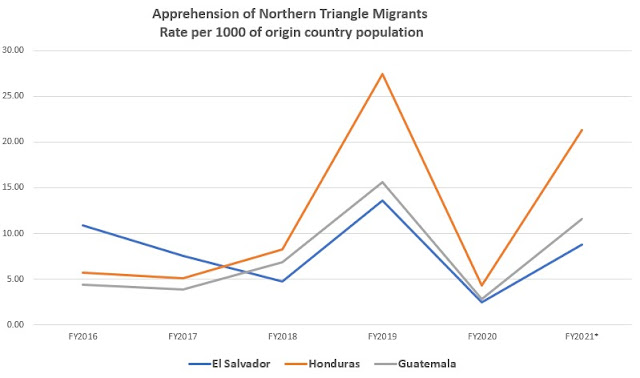 In 2016, 2017 and prior years, Salvadorans left their country at a greater rate than persons from Guatemala and Honduras.  That changed in 2018, when El Salvador's rate dropped below its neighbors.   And while El Salvador's rate has remained similar to Guatemala's since then, migration rates from Honduras have dramatically increased with the exception of the 2020 pandemic months.
The US government under the Biden administration has talked repeatedly about a need to address the root causes of migration from the countries of Central America.  These statistics show that those root causes, of poverty, violence and lack of opportunity, remain strong in El Salvador, pushing 300 Salvadorans every day last month to attempt to cross the US border.
Migration