The demands of the Salvadoran women's movement 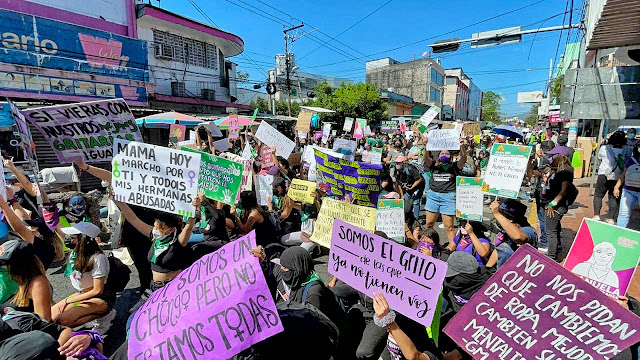 With the celebration of the International Day of the Woman on March 8, this is a good time to review the status of women's rights in El Salvador.   An increasingly vocal women's movement is highlighting the violence and inequality women continue to face in the male-dominated culture of the country.

On Sunday, March 7, streets in the center of San Salvador were filled with hundreds of women marching to demand recognition of their rights.  Concerns expressed by the marchers included violence against women, El Salvador’s absolute ban on abortion, lack of equal pay, lack of political representation and more. 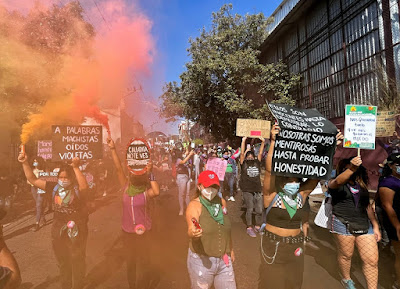 There is a photogallery filled with other images of the march here.

The women's march ended up in the historic center of San Salvador at Plaza Gerardo Barrios bordered by the National Palace and Metropolitan Cathedral.   Certain members of the crowd spray-painted graffiti messages on concrete barriers outside the National Palace and on the base of the statue of Barrios.   The graffiti led the government to send armed troops and police to the plaza, and the government sent workers to cover up the graffiti quickly in the afternoon.  That prompted retorts on social media that the government cared more for “cultural patrimony” than it did about the subjects raised by the protesters.

Many of the marchers held signs with the name “Manuela.”  They were demanding justice in  the case of Manuela v. El Salvador in which a hearing took place today before the InterAmerican Court of Human Rights.  Manuela’s case is another of those tragic situations in El Salvador where a young, poor woman suffers an obstetric emergency such as a miscarriage or a premature delivery and the fetus or newborn does not survive. The mother is then accused of having an abortion or having killed a baby. By treating Manuela as a criminal, rather than an obstetric patient, her lawyers claim that the medical and legal system failed to address life-threatening conditions cause by a precipitous labor, and then failed to treat a malignant tumor present when she was sentenced to prison for homicide.  Manuela died in prison from her disease.   More details of the case can be found here. 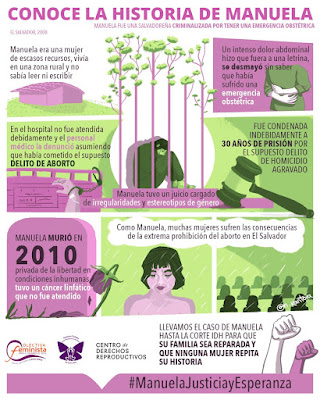 While the case of Manuela does not involve punishment for an abortion per se, it asks the InterAmerican Court to address the impact of El Salvador’s absolute ban on abortion, coupled with legal requirements that hospital staff report anyone suspected of an abortion.  That legal system produces tragedies where women like Manuela, who have miscarried or otherwise lost babies, are treated as criminals, subjected to interrogation, and deprived of respectful medical care.

The broader question of abortion rights was part of an interview this week of Vice President Felix Ulloa by Jorge Ramos of Univision.   Ulloa declined to answer, despite being pressed by Ramos, for his views or the views of the Bukele government on abortion rights.  Ulloa would say only that it was a matter of constitutional provisions in El Salvador and needed to be reviewed through a process of reforming the constitution if at all.   There was no indication that Bukele or Ulloa would advocate for such a change.

Other issues facing women in El Salvador were apparent in the case of “YouTuber” Roberto Silva.   He had been granted press credentials as part of Radio El Salvador, a government-run channel.  Silva was at the Crowne Plaza Hotel where election authorities were conducting the final scrutiny of results from the recent national elections.   While there, he was streaming live on YouTube as he saw two female FMLN deputies, Karina Sosa and Daniela Genovez, and commenced to make sexually crude and suggestive comments about them and follow them around.

The women filed official complaints against Silva under El Salvador’s Comprehensive Special Law for a Life Free of Violence for Women,   On March 8, the International Day of the Woman, Silva was arrested.

The machoistic verbal violence exemplified by Silva can also turn into physical violence.   130 feminicides were recorded in official statistics of El Salvador's Ministry of Justice and Public Security during the course of 2020.   Women face violence from domestic partners at an alarming rate.  This violence is exemplified in the case of police officer Mario Enrique Chávez, who today faced his intitial hearing for the murder of his wife, Norma Solís who was also a police officer.

Few of the killers of women in El Salvador are brought to justice.   The website Háblame De Respeto recently published A 9 años de la LEIV aún nos siguen asesinando (9 years after the Law for Elimination of Violence and they still keep killing us).  They report that of 2,871 women murdered in El Salvador between 2012 and 2020, the killers have been convicted only in 145 cases.

Women and girls also face high rates of sexual violence.  It is almost incomprehensible that there were 494 pregnancies in girls aged 10-14 during 2020 recorded by El Salvador’s Ministry of Health.   And if there were almost 500 pregnancies among girls this young, how many more were the victims of rape (because that’s what it is) which did not lead to pregnancy?

And in El Salvador, because of its absolute prohibition on abortion, these children, who have been the victims of rape and incest, must carry their pregnancies to term.

There will be even fewer women who are deputies in the next Legislative Assembly. There will only be 23 or 24 women out of the 84 members of that body.  This is the lowest number in the past 10 years. In the election of mayors to the capital city San Salvador and the other leading cities in El Salvador's 14 departments, all are men.

So far the Bukele government has done little to advance women's rights.   The former Ciudad Mujer initiative has largely been gutted, and the governmental Salvadoran Institute for Women (ISDEMU) is not even saying what it does.  Karen Morena at GatoEncerrado characterized the Bukele government's efforts on women's issues as only "cosmetic" in a lengthy article looking at all aspects of the government's work on gender during Bukele's first year in office.

Thus progress on women's issues will need to come from outside the government, through an organized women's movement making demands like those in the march last Sunday.   El Diario de Hoy published this gallery of 28 women important in Salvadoran history in a variety of fields from politics, the arts and human rights.   Their example shows the talents and the power of Salvadoran women and provides the hope for change. 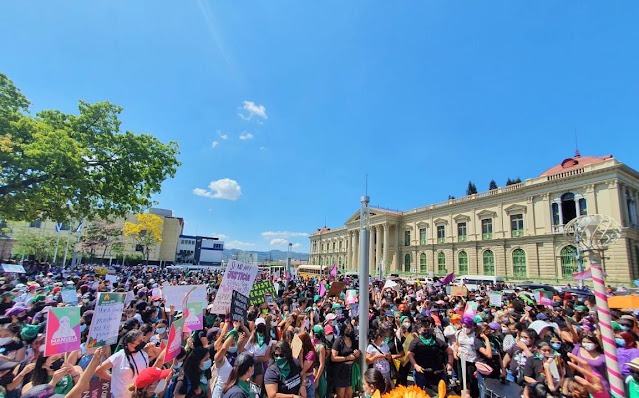 Photos of the March 7 protest taken by @Mile_arce19 and used with permission.
Women's Rights