March 05, 2021
Five days after the elections in El Salvador, more of the smoke has cleared and the scope of the election victories of Nuevas Ideas, the political party of president Nayib Bukele is more visible.   Although final results will not be declared until next week, the size of the tidal wave which is sweeping through the halls of power is obvious:

Legislative Assembly for 2021-24 (and change from current Assembly): 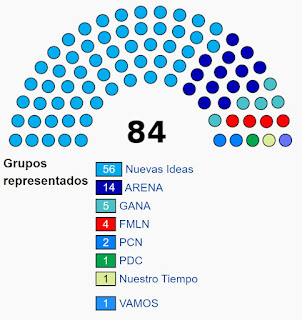 The Supreme Electoral Tribunal ("TSE" for its initials in Spanish) has commenced the process of the “escrutinio final.”  This process produces the final election results through a review of the tally sheets called “actas” produced by each of the more than 8000 voting tables.  The first few days of the escrutinio final have been contentious. Members of Bukele’s government made appearances and demands despite not having credentials from the TSE.  A programming bug in the software used to assist the process required that the process start over.  The TSE made a change in the rules at the last minute to allow extra party representatives into the process and to allow them to have a vote and not just the right to express their positions.

Despite the fractious nature of the final review process, it still appears unlikely that this process will produce changes in the preliminary results for allocation of the seats in the Legislative Assembly 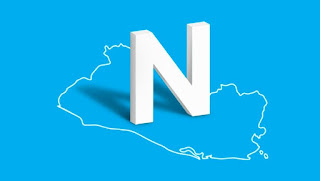 Comments after the elections

In the early morning hours the day after the election, Nayib Bukele tweeted:

We are all tired, but there is a little left. Our people waited 40 years for this. Let's think about what we have achieved and verify that each acta reflects the will of the people expressed at the ballot box. Every vote counts. We are writing the history of our country.

On Wednesday he celebrated:

In other words, the unprecedented victory of our people generates confidence in investors, which makes El Salvador's bonds rise in the international market. The markets analyze, free of ideologies, and their analysis is: EL SALVADOR IS RISING!

And in keeping with the type of media Bukele prefers to talk to, an hour and a half long friendly interview with YouTuber Luisito was released Thursday.

For critics worried about the growing role of the military in El Salvador's political life, it was unsettling to see the Minister of Defense coming out to affirmatively applaud the results and to criticize the civilian election authorities of the TSE.

The president’s press office tweeted comments from the Minister of Defense, Merino Monroy,

#PlanControlTerritorial | The head of @DefensaSV, @merino_monroy, states that he has the expectation that the new @AsambleSV, elected by Salvadorans, will support the financing that @FUERZARMADASV needs to carry out security tasks.

It was this @AsambleSV that denied society everything it asked for; they were totally rejected. The population needed security, economic and social development ": Minister of @DefensaSV, @merino_monroy.

"Unfortunately, @TSEElSalvador is not acting with transparency in the processing of data. The population recognizes that the magistrates of the collegiate body respond to some traditional political parties" [from appearance on the government televison news program on the morning of March 5]

La Prensa Grafica reported the reaction of the left wing FMLN after it was reduced to only 4 seats in the Assembly:

The party's general secretary, Óscar Ortiz, said: "We have lost an election, but our political proposition still exists. It will continue with the country in mind. We face an irreversible trend [in voter support] and as good democratic agents we take this on with courage and responsibility....The results are not only from yesterday. It is a trend of decline that we have been delivered in the recent elections. It winds up being much more clear in 2021," Ortiz accepted.

Given this, the former vice president announced that they will begin a consultation process with the party's rank and file, and which could mean the reform of the party's statutes. "We are going to have at the center the participation of many young people, many women, professionals, progressive people, who are going to make very important contributions to us and the result will be that we make the changes that are required at all levels," he said.

Erick Salguero, leader of the conservative ARENA party which lost 23 seats in the Assembly, expressed a similar sentiment on a talk show this morning:

It is not that our political proposition has failed, what has happened is that democracy has been shook up ... There are results and we respect them, but we will continue fighting for the stability of democracy ... We are going to visit our core supporters and listen to them, but we are also going to make a call to all the people who have accompanied us. We really have to unite. Now we can no longer talk about the political party, the country is at risk.

No political party has taken a chance on civic education and political formation of the people, for a simple reason: a trained citizen, an educated citizen is not easily manipulated. These are long-term processes that transcend short-term electoral agendas and administrations, and that are very far from indoctrination with which some initiatives have often confused education to act as citizens.

US charge d’affairs Brendan O'Brien was very visible on election day with observers from the US Embassy, making a point that the election process was being carried out fairly during the course of the day.   The Embassy has been fairly quiet regarding the results, with O’Brien only tweeting:

We congratulate all Salvadorans for having carried out and participated in the #EleccionesSV. All the participants, the candidates and, mainly, the voters played a very important role in this fundamental process for democracy.

If someone wants to see the glass half full, Bukele has accumulated enough political capital to be able to face in the three years that remain entrenched problems, such as starvation pensions, tax reform or dialogue with the gangs. But there are also ample reasons to see the glass as half empty, and that the massive popular support accentuates the authoritarian drift and growing militarism. We won't have to wait long to find out.

The international press largely commented on the size of the Nuevas Ideas victory, attributed it to disaffection with the existing political structure, and commented on Bukele's "authoritarian drift" while noting that now he will have no one else to blame for challenges in governing.   Here is a sample:

The new Legislative Assembly takes office on May 1.  It is possible that the outgoing Assembly might attempt to pass some legislation before then, but it would need to escape a veto from Bukele or face possible repeal from the incoming Assembly. The Minister of the Treasury indicated that the government is negotiating financing with the International Monetary Fund to allow it to refinance short term domestic debt and to cover budgetary needs coming out of the pandemic.  The IMF will probably require some type of financial reform, and so far the government is not commenting much on this other than to say it will do a better job of collecting existing taxes.

Bukele unveiled a new criminal forensics lab for the police, funded by US philanthropist Howard Buffet.  Bukele said this was part of Phase 3 of his security plan for the country which involves better tools for the security forces.    Meanwhile the Ministry of Tourism announced plans for the construction of an amusement park along the coast in Puerto Libertad.