Elections.  Final election results were announced by the Supreme Electoral Tribunal for the Legislative Assembly which did not change the results announced earlier.   Bukele's Nuevas Ideas party won 46 seats on its own and 10 seats in coalition with GANA.  From the coalition with GANA, 9 of the 10 deputies selected are Nuevas Ideas members, giving Bukele 55 seats in the 84 seat Legislative Assembly from his own party.  The Nuevas Ideas alliance with GANA brings the total to 61, well above the total needed to appoint the attorney general and members of the Supreme Judicial Court. 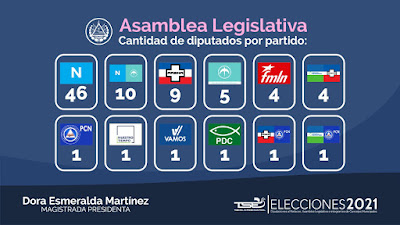 COVID-19.   El Salvador's Ministry of Health stated that it has vaccinated more than 41,500 medical workers with a first dose of the Astra-Zeneca vaccine.   The country plans to schedule second doses at 12 weeks to get more people vaccinated with a first dose.  The government also says it has been negotiating with the majority of vaccine manufacturers to acquire more doses of vaccine.

Meanwhile, more than 600 Salvadorans succumbed to confirmed cases of COVID-19 between January 1 and March 15 of this year.

For US relations, Bukele is not going to impress the Biden administration with an interview with Tucker Carlson. (It would have worked with Trump). But Bukele’s basic point is right - a country is failing if large numbers of its citizens are fleeing poverty and violence.

The gang mayor of Apopa.   Bryan Avelar writing in Vice News reports the conviction of the former mayor of Apopa (a municipality close to San Salvador) who had allied himself with the Revolucionario faction of the Barrio 18 gang to run the city.   The mayor, Elías Hernández, was arrested in June 2016 along with at least 14 city employees who were either gang members or dealt with the gang.

Attorney General raids Legislative Assembly.   Agents from the office of the Attorney General searched the offices of the Legislative Assembly beginning Wednesday.   They said they were looking for evidence as part of an investigation into "phantom jobs" in the outgoing legislature.   The investigation was prompted by social media pressure led by the president asserting that opposition parties had created hundreds of jobs for nonexistent persons or persons who did not actually perform work for the Assembly.

Star female surfer killed by lightning.   A top rated Salvadoran surfer, Katherine Díaz, was struck by lightning while surfing near El Tunco beach and killed Friday.   The tight-knit surfing community was in grief as she was laid to rest on Sunday.    Surfers will need to move past this tragedy to prepare for the Surf City 2021 World Surfing Games which take place starting May 29 in El Salvador.   This international competition is the final qualifying event for the Tokyo Olympics where surfing will debut as an Olympic sport.